AMD’s new generation Northern Islands class GPUs were officially launched in October with the two "Barts"-powered Radeon HD 6870 and HD 6850. And although Northern Islands was not a major step forwards for AMD - seeing that they only made small changes to the Evergreen architecture - the two mainstream parts were still very well received for their excellent combination of performance, efficiency, features and price. To get up to speed on what Northern Islands bring to the table, check out our earlier review here.

Northern Islands also marked a significant change in the way the cards are marketed. For one, the ATI brand has been killed off and replaced by AMD. And secondly, the nomenclature of the Northern Islands line-up differs substantially from past editions. Previously in Evergreen, the 5800 series represented the company’s premium single GPU cards, while the 5900 series represented the company’s single dual-GPU card, which also happens to be their most powerful offering. In Northern Islands, that has been tweaked a little as the 6800 series now refers only to the company’s higher-end mainstream offerings. While the most powerful single GPU Northern Islands cards will instead be bumped up into the Radeon HD 6900 series. Perhaps a sign of the "X2" nomenclature coming back for future dual-GPU editions? 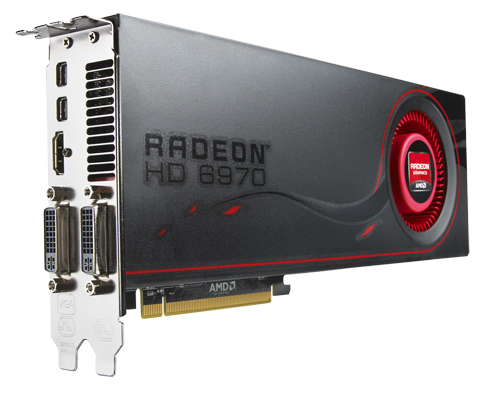 Speaking of the Radeon HD 6900 series, it is finally here. Initially expected to launch in mid-November, AMD decided to delay the launch of the new high-end Northern Islands parts by a month citing continuing strong demand for the Radeon HD 5800 and HD 5900 series. However, many believed that the Radeon HD 6900 series was really delayed by yield issues. And in the past month, NVIDIA has stepped up their efforts and introduced two super-quick cards, the GeForce GTX 580 and GTX 570. The two new SKUs are spanking fast and it'll be interesting to see how AMD's latest will match up against them.

Codenamed Cayman, the new Radeon HD 6900 series is launched with two cards, the Radeon HD 6970 and HD 6950, both of which are expected to replace the old Radeon HD 5870 flagship single GPU card and features more improvements and optimizations compared to Barts. In a nutshell, these two new cards will be new premium, fastest single GPU offerings from AMD.

But before we delve further into AMD’s latest, here’s a quick look at how the new Radeons stack up against the competition.