First and foremost, despite early rumors that Northern Islands will be built based on a 32nm or even a 28nm process, AMD has decided to stick with the tried and tested 40nm process from TSMC. This might seem as a bit of a disappointment to some, but seeing how NVIDIA suffered with Fermi, AMD has gone for the safe route, opting to stick to a 40nm manufacturing process and focus instead on cutting the cost of the new cards and getting products out to customers as quick as they can. 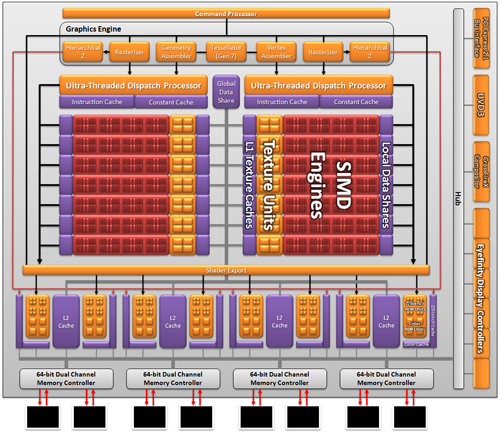 However, that’s not to say that Northern Islands is more of the same. Most crucially, AMD has gone to great lengths to rectify the weaknesses of the Cypress chip that headlined Evergreen. One of which is to be improve on Northern Islands’ tessellation capability. To that end, AMD has revised the tessellation unit that was found in the older Radeon HD 5000 series.

The new tessellation unit is now into its seventh generation and according to AMD, it offers double the performance of the one found on the Evergreen cards. This is thanks to improved thread management and buffering. And with that, AMD hopes that their new cards will offer more competitive tessellation performance, something which the Evergreen cards were bogged down by when compared to their Fermi rivals.

Also, another significant change is that the addition of another dispatch processor that has its own dedicated cache. Previously in Evergreen, all the SIMD engines had to share a single dispatch processor. With this, the SIMD engines, and subsequently the cores, will be better utilized. And to further increase performance, AMD has slightly bumped up the clock speeds of the new Northern Islands chips.

Therefore, architecturally, Northern Islands is mostly unchanged, but AMD has tweaked it so that lesser cores are now needed to provide the same amount of graphics horsepower. This in turn translates to lesser transistors, smaller die size, and therefore makes the chip less expensive to manufacture. And this is the basic idea behind Northern Islands: to bring more affordable cards to end users by making the chips smaller and less expensive to manufacture, while improving its performance characteristics. In a nutshell, to offer more performance per dollar.