ATI’s Evergreen cards brought multi-display gaming to the mainstream audience with its ability to power up to three monitors using only a single graphics card. With Northern Islands, AMD is naturally expanding the prowess of EyeFinity.

First and foremost AMD has upgraded the output connectors of their cards. The cards now boast the latest HDMI 1.4a ports, which have 3D output support and thus are fully capable of 3D Blu-ray playback on any display device supporting this HDMI standard. HD audio bitstreaming, which was already standard on Evergreen cards, will continue to feature on Northern Islands, and this will surely please the movie lovers, audiophiles and HTPC enthusiasts.

Here are some examples of what's possible with the Radeon HD 6870: 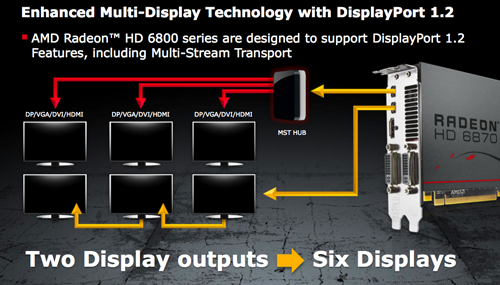 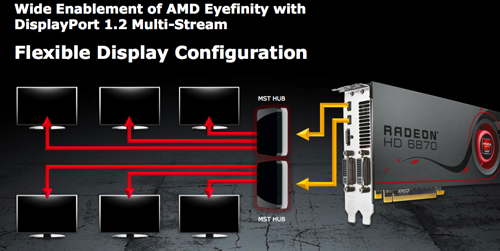 One thing to note about the twin DVI ports on the Radeon HD 6870 is that only one of them is a dual-link capable- the other is only single-link. Though this wouldn’t matter to most people, but for those who intend or are running on dual 2560 x 1600 pixels resolution monitors, it’s something to take note. Fortunately, the DisplayPort adapters are available to support more of such outputs.