EyeSpeed is a new marketing concept introduced by AMD and it basically refers to all things that can be GPU accelerated. This falls under the two broad categories of parallel processing and media processing and playback.

With Northern Islands, AMD is introducing UVD 3.0 (Universal Video Decoder 3.0), which is now able to decode more CODECs. Most notably, UVD 3.0 will offer hardware acceleration of 3D Blu-ray (MVC CODEC), and on top of that, MPEG-2 decoding is now handled completely by the GPU - in the past entrophy decoding of the decoding process still depended on the CPU. This should free up more CPU resources when watching MPEG2-encoded DVD or Blu-ray videos. Furthermore, MPEG- 4 part 2 DivX/XviD CODECs are also accelerated on this new UVD. Lastly, you can expect improved post-processing for better video quality in UVD 3. 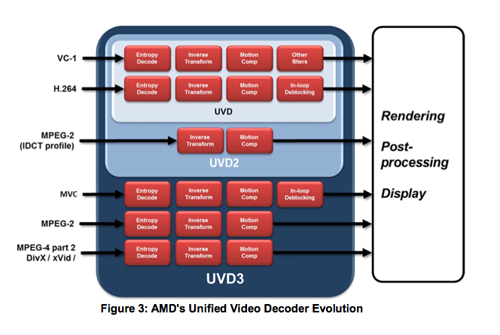 AMD is also renaming their ATI Stream brand to AMD Accelerated Parallel Processing (APP) technology. This reaffirms and renews the company’s position on parallel processing applications. With APP, AMD is pushing the OpenCL as the preferred standard for parallel processing tasks. And in response to NVIDIA’s own CUDA Zone, AMD has also launched their very own OpenCL Zone.

CUDA already has a fairly strong foundation when it comes to parallel processing operations and tasks, and it’ll be interesting to see if AMD’s renewed vigor in this aspect will be able to challenge NVIDIA.

With the new generation of cards, AMD has also addressed the issue of 3D. With Evergreen, 3D gaming could be enabled, but it was through third-party vendors and it wasn’t 'officially' supported. This made things confusing and troublesome for gamers because only specific monitors would work. With Northern Islands, however, things have changed.

AMD are now working with ecosystem partners to provide multiple solutions. AMD says this gives consumers more choice and flexibility, while partners can now also offer solutions that will differentiate themselves in the market. But most importantly, by supporting open standards, AMD says this would lead to lower costs, allowing more people to hop onto the 3D gaming bandwagon. This approach means using middleware software like iZ3D and DDD to provide various 3D experiences, such as using polarized glasses or shutter glasses technology. So the choice is wide and it's now up to the consumer. 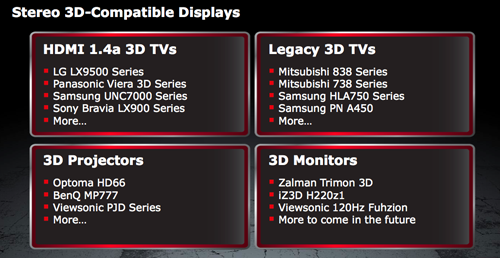 AMD also reiterated that by offering HDMI 1.4a ports on their new cards and hardware decoding for Blu-ray 3D, Northern Islands will be able to output 3D movies to any modern 3DTV (supporting the HDMI 1.4a standard). Looking ahead, this feature, coupled with the new UVD 3.0 will certainly make entry-level Northern Islands cards great for HTPC and media enthusiasts.