As we’ve mentioned in our opener, Northern Islands isn’t a major step forward for AMD. They've gone for the safe route and opted to stick to a 40nm process and made improvements by making the cores more efficient and the results show. The new Radeon HD 6870 and HD 6850, though packed with less cores, are just about as quick or even quicker than their predecessors.

Between the Radeon HD 6870 and HD 6850, the former is the more interesting of the two. Though not a direct replacement for the Radeon HD 5850, it was easily quicker than its predecessor and it some instances, could even challenge the Radeon HD 5870. Therefore, the new Radeon HD 6870 is certainly not short on performance. Furthermore, it is also slightly cooler and more power efficient to run.

Furthermore, let’s not forget the various other niceties that Northern Islands introduces. The inclusion of HDMI 1.4a ports means that Northern Islands is fully capable of integrating into the existing 3D ecosystem. And admittedly, although not every user will make full use of the multi-display possibilities that EyeFinity offers, it is a nifty feature to have anyways, plus, it’s good to know that you can expand your desktop real estate easily.

To add, having DisplayPort 1.2 ports means that the cards are future proofed, although it remains to be seen if DisplayPorts will be widely adopted as the connector of choice in the future. Ultimately, the wide variety of output options offered by Northern Islands will ensure that users are ready for whatever comes their way in the future. These new features and additions, coupled with the Radeon HD 6870’s outstanding performance makes it a very attractive card for the mainstream to high-end market.

In response to this bold new offering from AMD, NVIDIA has promptly slashed prices of their 1GB GeForce GTX 460 cards from US$229 to US$199, and also prices of their GeForce GTX 470 down to US$259. This should give you an idea of just how much of a threat NVIDIA thinks the new Radeon HD 6870 is.

With this cut in price, NVIDIA has quite successfully managed to differentiate its 1GB GeForce GTX 460 from the Radeon HD 6870 - they don’t look like direct competitors anymore. Nevertheless, it doesn’t escape the fact that the Radeon HD 6870, is the best mid to high-end graphics cards in the market right now. It might cost more than the GeForce GTX 460, which is a decent card in its own rights, but we feel that premium is justified because of its better overall performance and also the new features it offers.

Factor in the GeFore GTX 470, however, and a real dilemma arises, because at US$259, it’s only about US$20 more expensive, and by and large, the GTX 470 is the faster card especially when tessellation comes into play. However, it is also considerable hotter to run and obviously more power hungry, so it’s really a give and take situation. If you are willing to ignore the power hungry characteristics of the GeForce GTX 470 or if performance is your utmost concern, the GeForce GTX 470 suddenly looks like an attractive option. 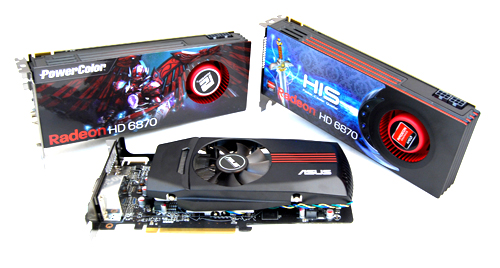 On the other hand, the Radeon HD 6850 is a little less exciting, mostly because of its less impressive performance. Although it’s not quicker than the old Radeon HD 5850, it was able to come close in most instances. But more importantly, it did manage to beat its direct competitor from NVIDIA, the 786MB GeForce GTX 460, though not to the same great extent as the Radeon HD 6870 compared to the 1GB GeForce GTX 460.

Estimated launch price of the Radeon HD 6850 is expected to be around US$179, which makes it slightly more costly than the 768MB GeForce GTX 460, which normally retails for around US$169. But if you factor in the minor performance advantage and the host of new Northern Islands features, then Radeon HD 6850 is actually a very decent mainstream card.

Locally, the Radeon HD 6870 can be expected to be found for around S$389 and the HD 6850 for around S$318. This makes it considerably cheaper than both the existing Radeon HD 5870 and HD 5850 - S$599 and S$429 respectively (although one can expect price cuts to come in due time). And against the competition from NVIDIA, the new Radeons do command a premium, which is inline with their US pricing. In contrast, the 768MB variants of the GeForce GTX 460 can be found for around S$280, and the 1GB ones for around S$320.

All things considered, the new Northern Islands cards are off to a good start, offering good bang for buck, something that Radeons have come to be known for. And although the Radeon HD 6870 is easily the more impressive of the two, the HD 6850 is not too shabby itself and is a really decent offering too if you can’t stretch your budget to meet the HD 6870.

The introduction of new generation graphics have always been exciting times, and with the high-end Cayman and (possibly dual-GPU) Antilles part set to be unleashed in the following months, we can't wait to see what other goodies AMD has in store for us. As for NVIDIA, these are trying times, since they only recently managed to get their act together with the GeForce GTX 460 and GTS 450, and yet now have to contend with AMD’s latest. In any case, competition is good for us enthusiasts and gamers, so let the good times roll. Stay tuned for our follow-up CrossFire article!