A New Beginning with AMD

A New Beginning with AMD

In June 2008, ATI released their Radeon HD 4000 series to critical acclaim. In our review, we found it to be an absolute gem of a card, offering great performance for its price. It also took NVIDIA by surprise, so much so that they were forced to slash prices of their own cards even though they had only been out in the market for barely a month.

In September last year, ATI followed up with their awesome Evergreen series. Architecturally, Evergreen wasn’t a technological breakthrough, but ATI managed to increase graphics horsepower yet keep power levels down. The end result was some of the most power efficient cards we’ve seen. And crucially, ATI’s Evergreen cards were also the first in the world to offer full DirectX 11 compatibility, something that took their arch rival NVIDIA a further full six months to do. By which point ATI had already released their entire Evergreen line-up, and allowed them to build a significant lead over NVIDIA.

It’s been slightly more than a year since the launch of Evergreen and a lot has changed since. For one, the ATI brand has been killed off and has been replaced by AMD. AMD, if you recall, acquired ATI back in 2006. Hence, the new Radeons are now marketed as AMD cards, whereas the older Radeons will be continued to sold as ATI cards.

Also, NVIDIA’s Fermi is slowly gaining traction in the form of the outstanding GeForce GTX 460 and the mainstream GTS 450. Therefore what better time to launch your new generation of graphics cards then now? 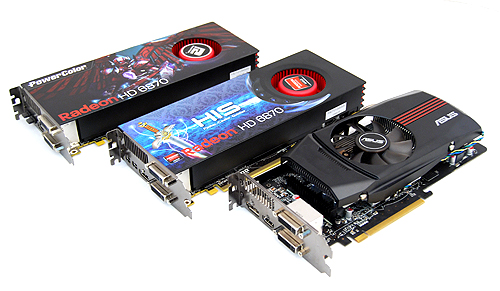 And today, AMD has kickstarted the next round of graphics card wars by landing the first punch with their all-new Radeon HD 6870 and HD 6850, part of their brand new Northern Islands line-up.

In Northern Islands, that has been tweaked a little as the 6800 series now refers only to the company’s higher-end mainstream offerings. While the most powerful single GPU Northern Islands cards will instead be bumped up into the 6900 series.

Now before we delve further, here’s a quick look at how the Radeon HD 6870 and HD 6850 stacks up against its closest rivals.

Here's how the two new SKUs from AMD compare against its closest competitors.