After Evergreen comes Northern Islands, and just last week, AMD released their next generation graphics solution with the Radeon HD 6870 and HD 6850. The two new SKUs powered by the all-new Barts GPU has received high praise from for its compelling combination of performance and price (us included). In fact, the new cards even forced NVIDIA to cut prices of their cards - the GeForce GTX 470 can now be had for around US$259, while the 1GB variants of the GeForce GTX 460 is set to retail for around US$199.

However, the new cards are not perfect and one of the major criticisms leveled at the card was that architecturally, Northern Islands is not all that different from Evergreen, leading some to be dismayed that AMD failed to introduce a revolutionary architecture. Nevertheless, there’s no denying that the new Radeon HD 6800 series cards offer serious graphics firepower for their price, and we are sure that they’ll sell like hot cakes.

And in HardwareZone tradition, we are now following up on our Radeon HD 6800 series review with an analysis on how the Radeon HD 6870 will perform in CrossFireX. AMD claims that performance scaling has been improved and we are hoping to see some dramatic increases in performance.

To evaluate how the new Radeon HD 6800 series cards will perform in a 2-way CrossFireX configuration, we’ll be using our trusty X58 setup with the following specifications: 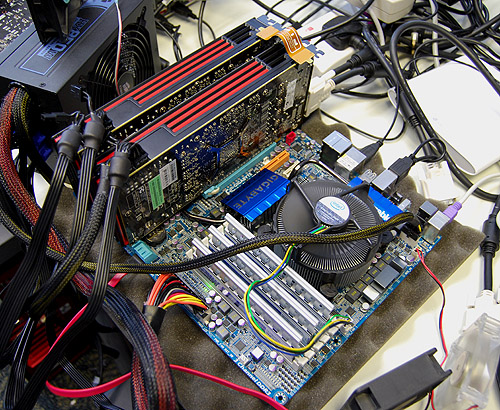 It goes without saying that the key battle here will be between the Radeon HD 6870 CrossFireX against the 1GB GeForce GTX 460 variant in SLI. Also, it’ll be interesting to see if the new Radeons in CrossFireX can beat a single dual-GPU Radeon HD 5970 and the NVIDIA GeForce GTX 480.

The list of cards tested and driver version used: