The new Northern Islands Radeon HD 6850 have been released to mostly positive reviews and reception. It’s only been only a month since we’ve seen the Radeon HD 6850 but card makers are already coming out with customized and factory overclocked versions of the card, and sales have been so good that AMD is having trouble meeting demand, which in turn is causing prices of these cards to shoot up.

For the uninitiated, the Radeon HD 6850 is powered by the new 960-core Barts PRO chip, which is isn’t groundbreaking in terms of architecture. In fact, the Barts chips powering both the Radeon HD 6850 and HD 6870 are really revised and tweaked version of the original Cypress chip that debuted in the Radeon HD 5870. Nevertheless, we found that the Radeon HD 6850 is a good offering from AMD in its own right. To get up to speed with AMD’s latest, it’s best that you check out our full review. 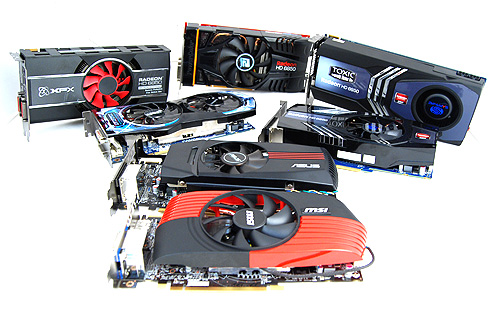 And today, we are continuing our coverage of AMD’s newest cards by checking out custom editions of the Radeon HD 6850 from ASUS, Gigabyte, MSI, PowerColor, Sapphire and XFX. Sporting custom fitted coolers and some even factory overclocked, here are our contender’s for today’s roundup:

Here are our contenders for today’s roundup: