A Primer on Beema & Mullins 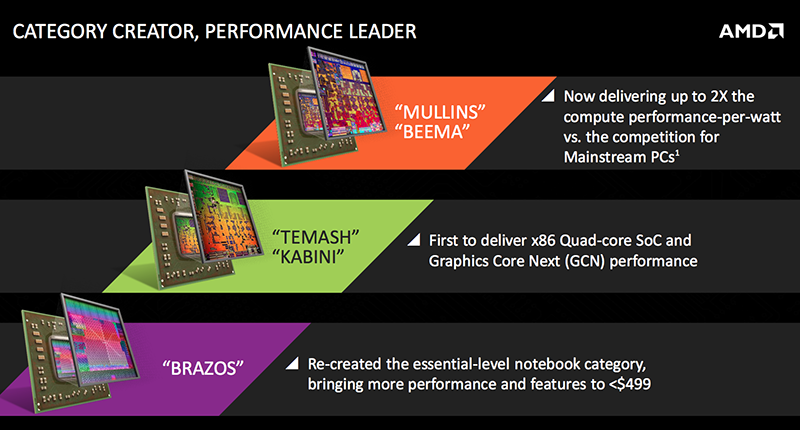 The new APUs were launched to much fanfare and high expectations, but unfortunately under delivered on their performance promise and were therefore unpopular to OEMs. As we had discovered during our preview of Kabini last year, overall performance was disappointing in light of Intel's impending Haswell launch. To further compound matters, the PC industry in general - desktops and notebooks - has suffered a steady decline in recent times, resulting in even poorer uptake on Kabini.

As for Temash, despite being the world’s first quad-core SoC, finds itself in a market dominated by the iPad and various Android tablets. A recent study by Gartner indicates that Windows tablets only have a paltry 2.1% share of the tablet market. As a result, it has been largely overlooked by OEMs and users alike.

However, not one to be discouraged, AMD has followed up on Kabini and Temash with Beema and Mullins. Beema replaces Kabini while Mullins replaces Temash, and like their predecessors, are targeted at low-power and mainstream applications (again for thin mobile platforms like notebooks and tablets respectively). 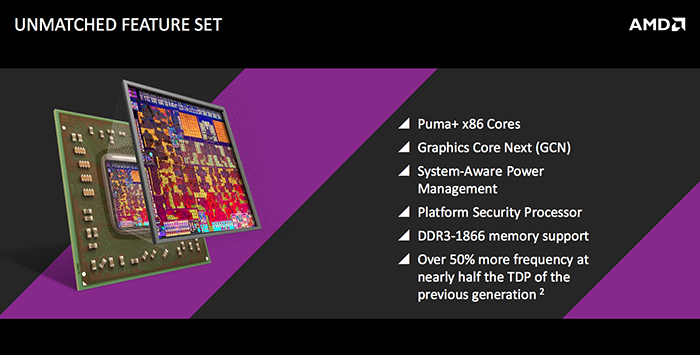 Briefly put, the new Beema and Mullins APUs are an incremental update of Kabini and Temash. The headline change here is the use of new Puma+ cores and other hardware improvements and optimizations to reduce power leakage and boost CPU frequencies. Also new to Beema and Mullins is the addition of an ARM Cortex-A5 with ARM TrustZone technology for security. And to improve power efficiency, the new APUs will support DDR3L (low-voltage) and various hardware optimizations and enhancements have also been undertaken to reduce power leakage.

To add on to these are also two new power management ideologies. The first is called Skin Temperature Aware Power Management (STAPM), which looks at the 'surface temperature' of the tablet to determine whether it can boost clock speeds. This allows the APU to remain in a boosted state for a longer period of time as it often takes a bit longer before surface temperatures of the tablet to increase to the point where it becomes uncomfortable to handle. 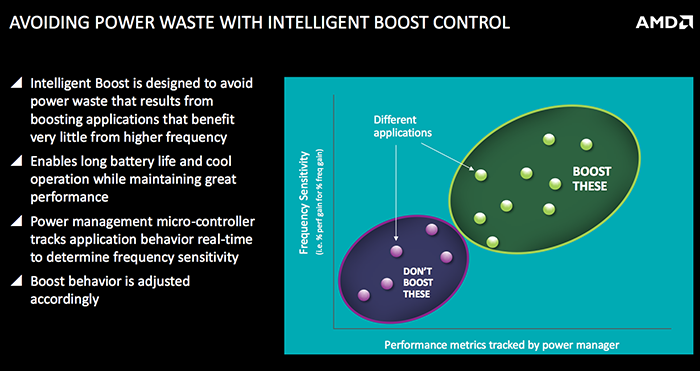 The second is called Intelligent Boost Control, in which the APU looks at what tasks are worth boosting its clock speeds so that it can complete them faster and return to an idle state quicker. Think of it as a car that is accelerating quickly so as to get to its most efficient cruising speed. The net result of these improvements is performance increases without sacrificing on TDP (similar ideals to Intel's Turbo Boost).

Here are the various SKUs that users can expect to see from Beema and Mullins.

On the graphics front, Beema and Mullins will employ GPU parts using AMD’s latest GCN architecture and as you can see from the table above, are all comprised of 128 Radeon cores, with the only differentiating factor being GPU core clock speeds. According to AMD, the higher clock speeds coupled with power optimizations is enough to give the new APUs up to 10% better graphics performance at 40% lower TDP when compared to Kabini and Temash. However, these new integrated GPU parts will have a new branding that will hopefully make it clearly for users when deciding which APU to pick.

Speaking of branding, AMD’s new Mullins part will have a new nomenclature as evidenced in the table above. Mullins APD will feature “Micro” in their model name, which will clearly differentiate it from its Beema counterparts.

We had the opportunity to spend some time with AMD’s reference Mullins tablet, to find out how it performs head over to the next page.