Building on the Brazos platform's momentum which saw tremendous sales in the first quarter of this year, AMD is now making available the next iteration of their Fusion APUs known as Llano. The new APUs will be known as the A-Series APU and it will be offered in various flavors covering systems with price points from US$499 and beyond. The new A-Series APUs will go head-to-head with Intel's 2nd generation Core processors and will attempt to compete hard with Intel in the budget and mid-range segments (Core i3 and i5).

The new A-Series APU will feature up to four x86 CPU cores and will be introduced in the "Sabine" mainstream notebook platform (check the link for a comparison of Brazos vs. Sabine). The CPU cores will feature AMD's own Turbo Core technology which dynamically increases the core frequency for added performance when applications call for it. Besides that, the APU also features an array of Radeon cores which gives it discrete-class DirectX 11 graphics performance. This means that without adding an additional graphics card, the APU will be able to deliver smooth 3D graphics using the latest DirectX 11 API. On the other hand, Intel's Sandy Bridge, which also similarly supports rendering of 3D graphics, is only capable of supporting the older DirectX 10.1 API and in terms of graphics quality, it won't be as realistic as what AMD's A-Series can deliver with DirectX 11.

As you can see in the specifications above, the A-Series will come in three versions, namely A8, A6 and A4. The A4 series of processors will go head on to compete with Intel's Core i3 while A6 will compete with lower-end Core i5 and higher speed Core i3. The A8 series of processors are slated as the highest performance parts you'll find in the Llano line-up and they are positioned to go against Intel Core i7 and higher-end Core i5 processors.

The CPU clock speed indicated in the table above shows its speed when Turbo Core is active while the lower clock number is the lower threshold value of the clock speed at low/idle workloads.

For now, AMD is releasing processors for the notebook market and you can see in the table above that these have rather low TDPs at 35W and 45W. You can see that all the APU models denoted with an "X" correspond to the 45W TDP threshold and signal that these are the more 'extrme' versions within the series. Future Llano APUs for desktops are expected to carry an even higher TDP rating of 65W and 100W and we expect these to have high CPU and GPU clocks.

On the graphics portion of the APU, you'll find that AMD has rated its Radeon GPUs based on the number of Radeon cores allocated to the GPU, as well as its GPU clock speed. A notebook with either one of these APUs should give rather decent entry-level graphics performance if we are to compare the Radeon model number with its discrete counterpart. In fact, AMD claims that the A4-3300M part is more superior than the discrete version of the AMD Radeon HD 6470M commonly used in mobile platforms.

Since the graphics architecture employed within the APU is scalable, we can expect to see future APUs to feature even faster GPUs. Even with the current design, AMD indicated that its GPUs are targeted to reach clock speeds of up to 600MHz, possibly meant for higher TDP parts used in its desktop platform. 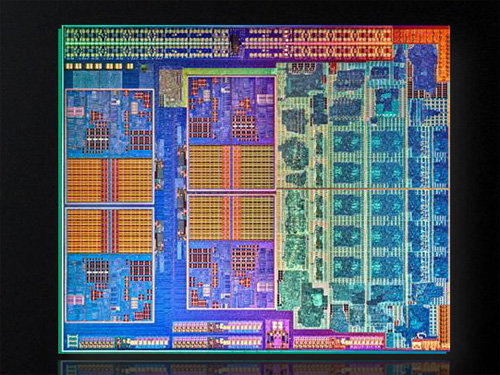