Whether or not new products wow us, it seems like leaks have become increasingly more accurate. At a pre-CES press conference today, AMD has officially launched the successor to their popular Trinity and Richland desktop APUs - the Kaveri APU.

The Kaveri APU offers a big leap in technology and feature enhancements as it combines some of the best advances made in CPU and GPU development:-

Disregarding the new features that Kaveri acquired from integrating a GCN architecture similar to the Radeon R290 series Hawaii graphics cores, the most radical change is that for the very first time, Kaveri enables the following:- AMD has stressed that both CPU and GPU cores are Compute cores in the Kaveri APU. For a better understanding, here's an excerpt from AMD as to what constitutes a compute core:-

A compute core is an HSA-enabled hardware block , that is programmable (CPU, GPU or other processing element), capable of running at least one process in its own context and virtual memory space, independently from other cores. A GPU Core is a GCN-based hardware block containing a dedicated scheduler that feeds four 16-wide SIMD vector processors, a scalar processor, local data registers and data share memory, a branch & message processor, 16 texture fetch or load/store units, four texture filter units, and a texture cache. GPU Core can independently execute work-groups consisting of 64 work items in parallel.

At this point of time, we can't share hard numbers on performance, but here's what AMD has cleared for us to share today:- AMD's general gaming performance goal for the new Kaveri APUs is to deliver Full HD resolution gaming at a playable frame rate of 30 FPS or better. As a sneak peek, AMD showed us Kaveri running the latest Tomb Raider game and it was smoothly rendered for 1080p resolution output. It can't yet pull its weight if you push the visual quality levels to the game's best settings, but 'mid-range' is achievable.

Surprisingly, AMD also showed that something as mundane as tackling daily work chores can benefit from AMD APU's HSA preposition. For example, in the latest build of LibreOffice, a free and open source office suite, the Calc application (the equivalent of Microsoft Excel) has been coded to issue OpenCL instructions for calculations which would then take advantage of GPU acceleration. Given the heterogeneous computing nature of the Kaveri APU, it will automatically utilize the appropriate 'compute core' for this task and thus accelerate the computational task. Here's a slide that shows the advantage of using its onboard GPU vs. executing the same task on the CPU when acceleration has been disabled:- 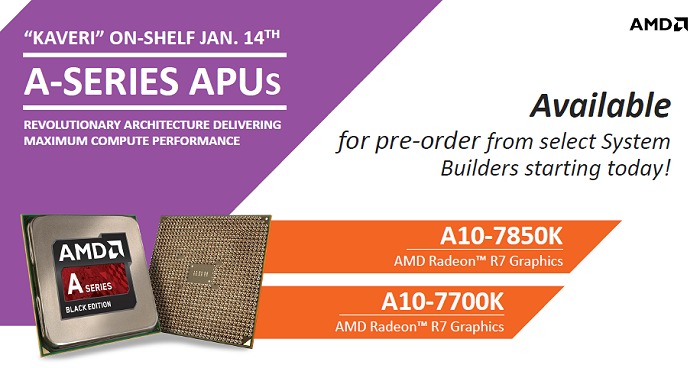 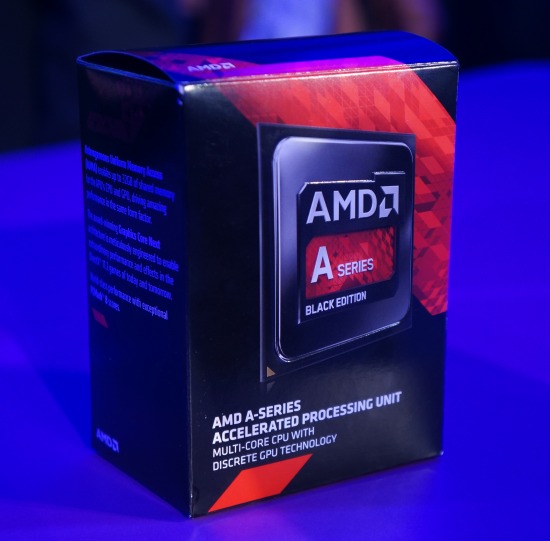 Stay tuned for more information over the next few days as we get more updates from the CES 2014 show!