With the introduction of the AMD Trinity desktop APUs that require the new AMD Socket FM2 CPU socket, there has been a deluge of new motherboard designs slowly trickling down into the retail channel from the usual board makers. While the decision for AMD to introduce a new CPU socket may have garnered some protests from adopters of its previous generation short-lived Llano APUs, we have been assured by the company that this new CPU socket will be relevant for current Trinity generation plus another. 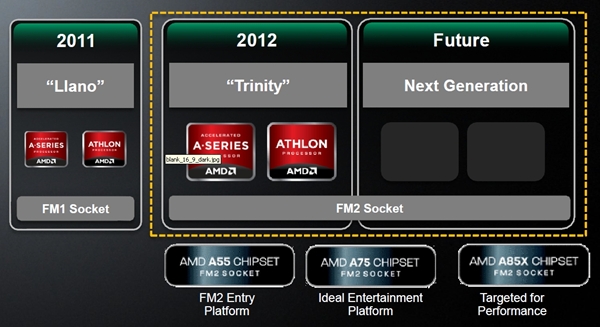 Having reviewed the AMD A10-5800K and the AMD A10-5700 Trinity APUs late last year, HardwareZone has since been busy preparing for our next Tech Awards event and covering CES 2013 for various updates that would set the pace for this year. With the Lunar New Year celebrations settling down, we're picking up from where we left and that's to check out suitable AMD FM2 boards for the Trinity APUs. In this shootout article, we rounded up four high-end AMD A85X chipset based boards which represent the top players like ASUS, ASRock, Gigabyte, and MSI. While we did try to bring in other brands, they didn't have samples ready for our evaluation period that we conducted last month.

Before we dive into what each of the four boards have to offer, take note that there's a mix of mATX and normal ATX sized boards in this roundup. While we would normally compare boards that are of the same class and size, motherboards have been evolving rapidly that apart from the physical size allowing more expansion options, mATX boards these days don't differ much in capabilities from normal desktop sized ATX boards. Furthermore, there weren't enough of options available locally from the motherboard vendors (at the time of evaluation) to facilitate comparisons with similar form factor products. With this in mind, we ensured the motherboard class and features across the brands were competitive enough to be safely compared, while discounting the usual extra expansion options that one would naturally expect ATX sized boards to offer. We'll share more comparison details towards the end of our evaluation. 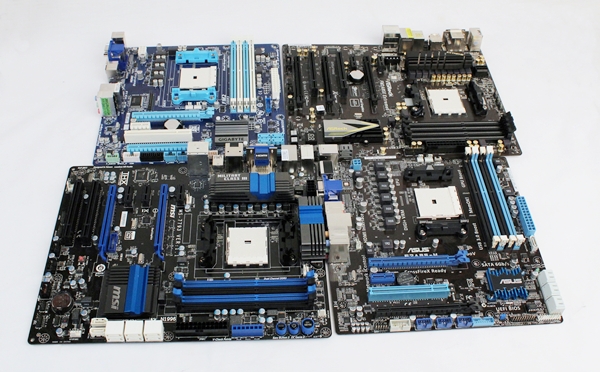 AMD has a total of three A-Series desktop Trinity chipsets; each with different target audiences with varying computing requirements. Joining the existing A55 and A75 chipsets (borrowed from the previous generation Llano APU and incorporated on the new Trinity 'Virgo' desktop platform) is the new AMD A85X chipset. This is a high-end option to target users who want to use an FM2 APU with dual discrete GPUs in a CrossFire configuration. So while AMD Dual Graphics technology is supported across all chipsets to utilize a hybrid form of CrossFire between the integrated GPU and supported discrete GPUs, the full fledged CrossFire support with multiple discrete GPUs is only supported on the AMD A85X chipset. This is because of the PCIe lane configuration support that's more flexible on the AMD A85X. Here's how the three class of chipsets compare for the AMD FM2 processors:- 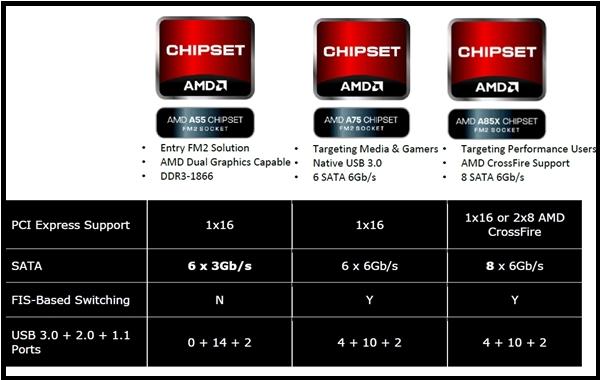 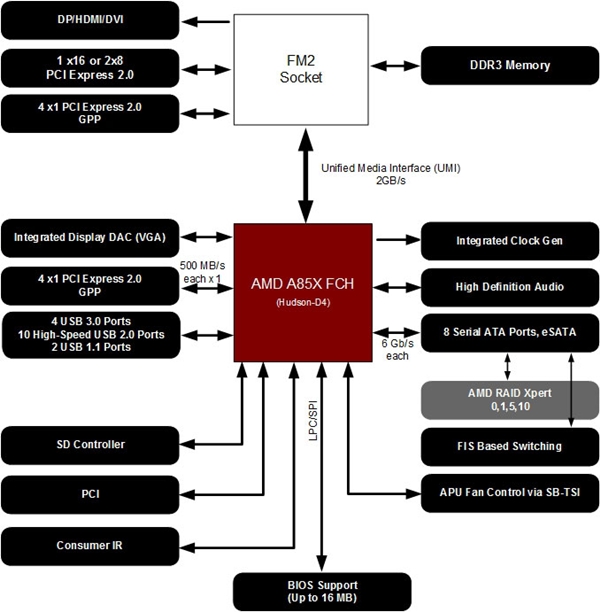 With support for FIS-based switching on the AMD A75 or A85X chipset-based boards, the system is able to utilize one of its designated eSATA port as a hub to increase the number of eSATA ports it can support, akin to a USB hub. This feature will only be relevant to users who have a slew of eSATA devices. The AMD A55 is left out of the picture in this case.

Without further ado, we move ahead with our round-up of four top-of-the-line AMD A85X motherboards that we've put to test.