An AIO PC with a gorgeous 34-inch curved display? HP just unveiled that and more!

An AIO PC with a gorgeous 34-inch curved display? HP just unveiled that and more! 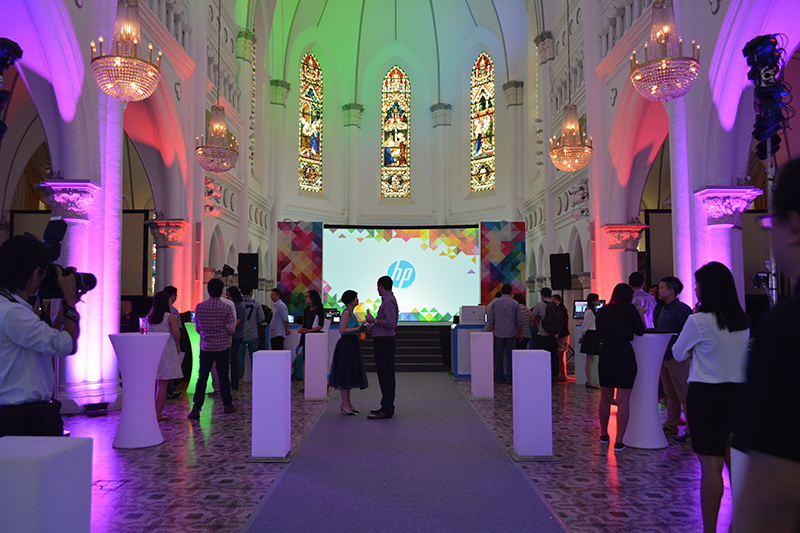 It’s HP’s turn to roll out new goodies in time for the holiday shopping season. As it turns out, fans of convertibles and 2-in-1 hybrids are going to have plenty to choose from. Just last month, Lenovo laid out the carpet for holiday shoppers with a slew of portable devices.

This time, we headed down to HP’s unveiling event at CHIJMES to check out its game plan for wooing gadget shoppers. Well, hold on to your wallets, because there’s a lot that’s going to tempt you! Anyone want an AIO PC with a whopping 34-inch curved display? 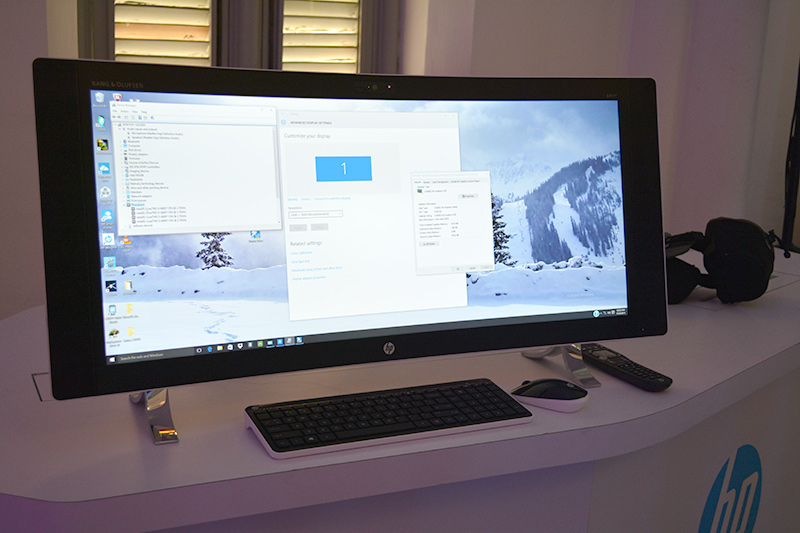 The 34-inch Envy Curved AIO was arguably the most impressive star at the event. Targeted at customers who have an eye on multi-monitor setups, the Envy Curved AIO merges the idea of separate displays into a single, seamless panel.

According to HP, this is the world’s first 34-inch AIO to have a curved display. The glass IPS display has a resolution of 3,440 x 1,440 pixels, which gives it a 21:9 aspect ratio. Seriously, you'll never run out of screen space for documents, and you can have fun snapping windows into place with Windows 10's Snap feature. It is also equipped with a sixth-generation Intel Core i7-6700T (2.8GHz, 8MB L3 cache) processor to tackle video editing or heavy multi-tasking, and comes with an NVIDIA GeForce GTX 960A (likely an OEM variant of the GeForce GTX 960) for graphics processing.

In addition, it supports up to 16GB of DDR4 memory and a 2TB hard drive, so this will make an ideal family PC for everyone’s photos, videos, and music. Furthermore, the webcam is actually an Intel RealSense camera, which means that it will support Windows Hello on Windows 10 for quicker facial authentication for individual users. The RealSense camera also allows interaction with the PC via gesture control, which should be quite an experience on that huge 34-inch curved display.

On top of that, it comes with a six-speaker audio array, including two tweeters, that is tuned by Bang & Olufsen. This means more immersive audio and also improved performance in the high frequencies, so this AIO PC is truly an all-in-one affair.

Unfortunately, you’re not likely to get your hands on one before Christmas. HP expects it to be available only at the end of December, starting at a price of S$3,499. 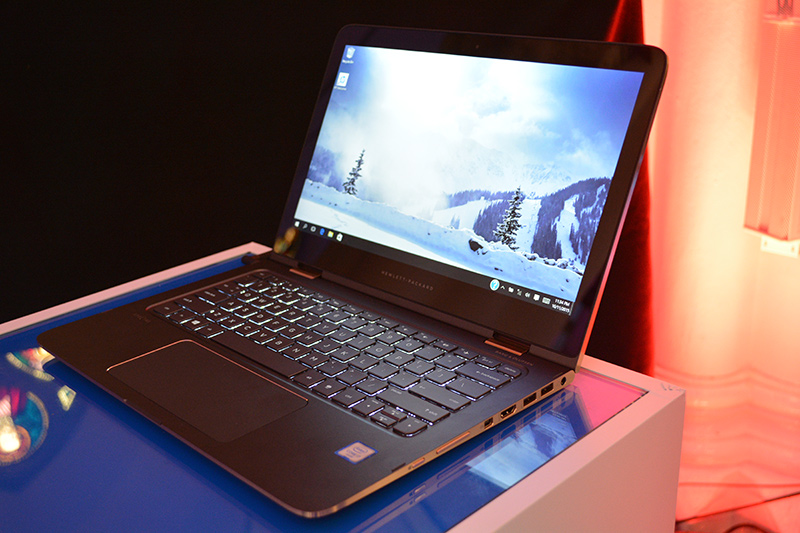 This special edition of the HP Spectre x360 is a picture of understated elegance. At first glance, it looks similar to the original Spectre x360, but the changes are far more subtle. It is actually intended to commemorate Bang & Olufsen’s 90th anniversary, and the B&O logo now features prominently on the top right corner of the keyboard, although the speakers are unchanged from the previous model (which was also tuned by B&O). In addition, the 13.3-inch convertible (the display can be flipped all the way around) now comes in a dark ash silver color – instead of the original light silver – with gold accents. 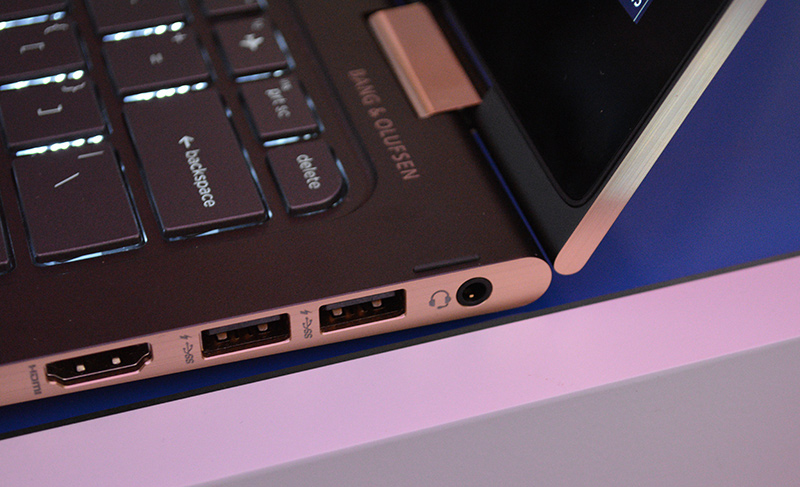 Of course, the more significant changes take place under the hood, and the new Spectre x360 has been upgraded with the latest sixth-generation Intel Core processors, up to 8GB of DDR3L RAM, and a 512GB SSD. The base model comes with an Intel Core i5-6200U (2.3GHz, 3MB L3 cache) processor, with the option to upgrade to a Core i7-6500U (2.6GHz, 4MB L3 cache). At 1.44kg and just 15.9mm thin, this is also a device that you can pretty much take anywhere. It comes with a 2,560 x 1,440 pixels display, and HP is claiming up to 12 hours of battery life on it. For more information on how these Intel Skylake processors stack up in the series, you can tune into this article.

HP also dropped one interesting tidbit about this laptop for us – this is actually the last laptop that will come with the Hewlett-Packard branding. From now on, all devices will have the HP logo instead.

The special edition of the HP Spectre x360 is available exclusively at Harvey Norman starting at S$1,999. 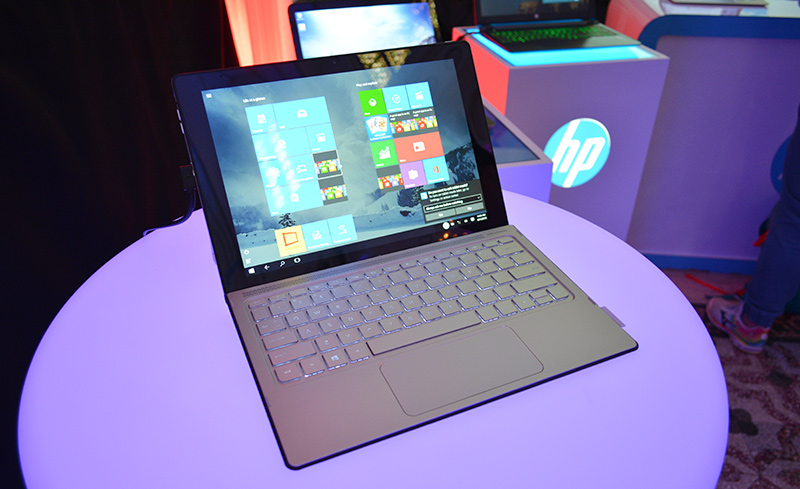 HP also unveiled the new Spectre x2 (a 2-in-1 hybrid that's not to be mistaken for the Pavilion X2), an obvious challenger to the Microsoft Surface Pro 4. It is a mere 8mm thick without the keyboard, which is just a hair thinner than the 8.45mm-thick Surface Pro 4. With the keyboard attached, the Spectre x2 comes in at 13.15mm thick.

The new Skylake Intel Core m7-6Y75 (1.2GHz, 4MB L3 cache) processor has allowed HP to use a fanless design on this one, so that means no whirring fan noises at all. However, unlike the Surface Pro 4, there is no option to configure it with more powerful Intel Core i series of processors. And like almost everything here, the speakers are tuned by Bang & Olufsen, and users will also have the option to configure the Spectre x2 with a 256GB SSD and up to 8GB of LDDR3 RAM.

The display is a 12-inch 1,920 x 1,080 pixels panel and comes with a stainless-steel U-shaped kickstand, which sets it apart from the solid kickstand on similar devices like the Surface Pro 4 and Lenovo Miix 700. In addition, the display uses something called Panel Self Refresh (PSR) technology, which allows parts of the PC to power down when displaying a still image. HP says the kickstand design also helped make way for a larger 42 watt-hour battery that’s good for up to 10 hours. 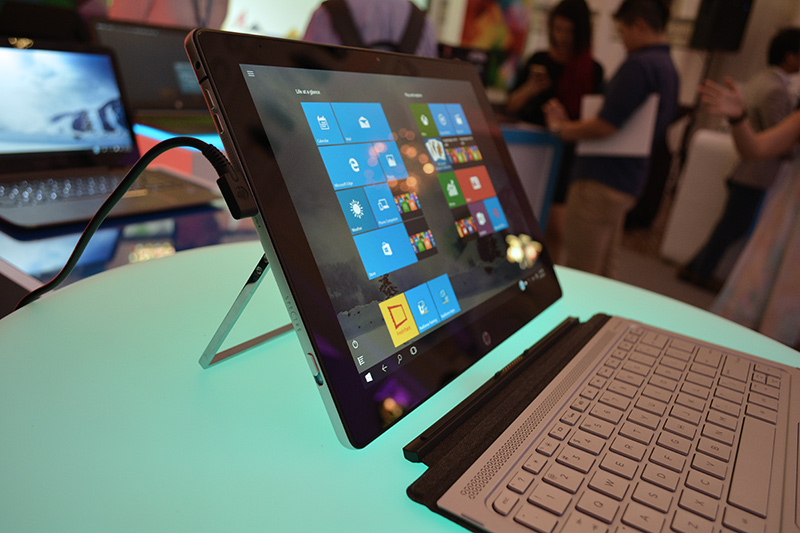 HP also highlighted the full-sized keyboard that comes with the Spectre x2. It attaches to the display via a magnetic hinge that yet again reminds us of the Surface Pro 4. However, one key difference is that it’s actually a hard aluminium top keyboard (the bottom is still woven fabric) unlike the softer Type Cover keyboard on the Surface Pro 4. 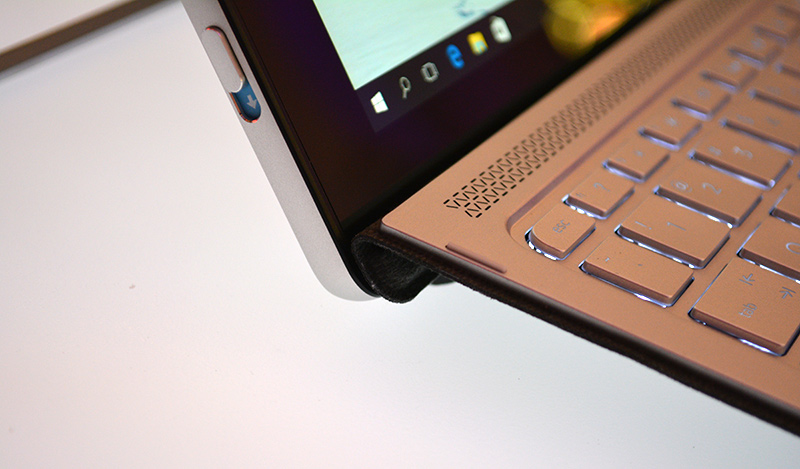 The Spectre x2 will be available at from the end of November, with prices starting at S$1,799. 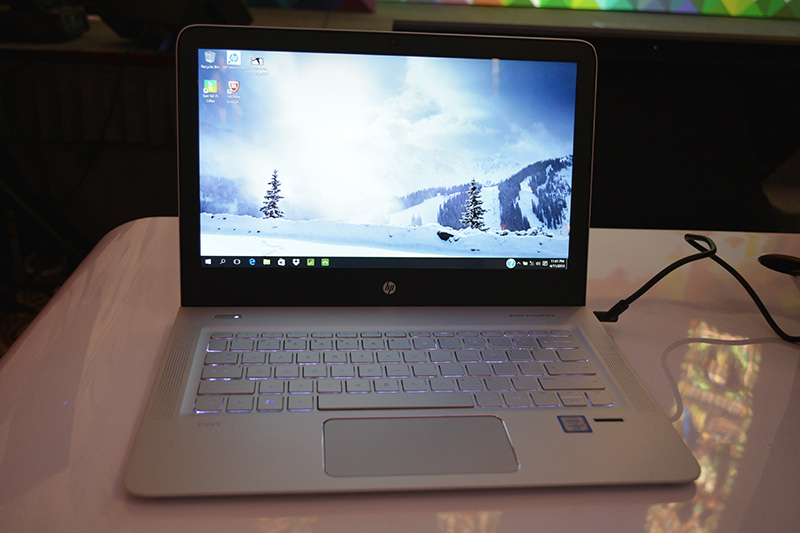 The new 13.3-inch HP Envy is supposedly the thinnest and lightest of its kind. It is just under 13mm thin and weighs 1.27kg, shedding millimeters and grams compared to the Spectre x360.

In addition, it features a new lift hinge design, which automatically elevates the keyboard when the lid is open. This allows for a more comfortable typing angle, and also promotes better air circulation under the laptop. 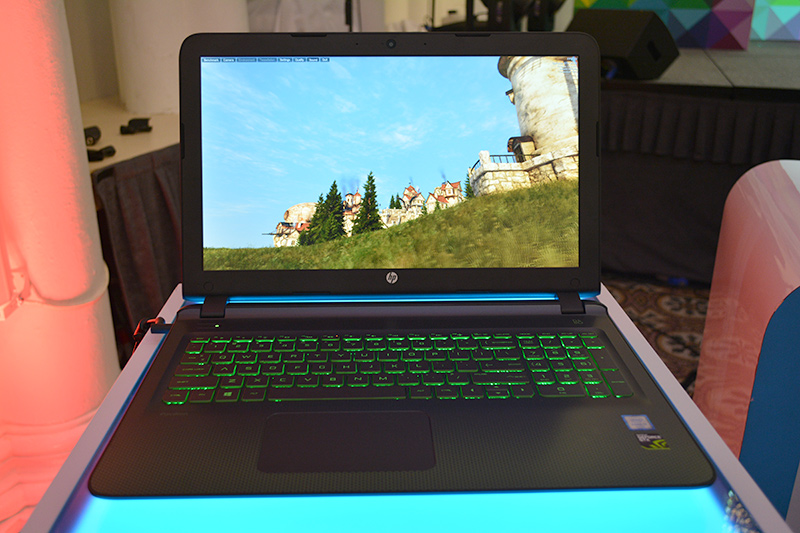 We also saw the new Pavilion Gaming notebook, a 15.6-inch laptop with some aggressive design flourishes to appeal to gamers. It is powered by a graphics module from the green camp – an NVIDIA GeForce GTX 950M to be exact – so the green LED backlit keyboard seems particularly fitting.

On top of that, it runs a sixth-generation Intel Core i7-6700HQ (2.6GHz, 6MB L3 cache) processor and can be configured with up to 16GB of DDR3L RAM. There is also an option for a standalone 1TB hard drive, or a 128GB SSD and 1TB mechanical drive if you’d like both speed and storage space. Bang & Olufsen-tuned speakers make an appearance here as well, although gamers will probably prefer to use their own headset.

At 2.32kg, HP also intended the Pavilion Gaming notebook to be reasonably portable. It is quoting up to 8.15 hours of battery life, so the notebook could very well serve as a work machine at times. 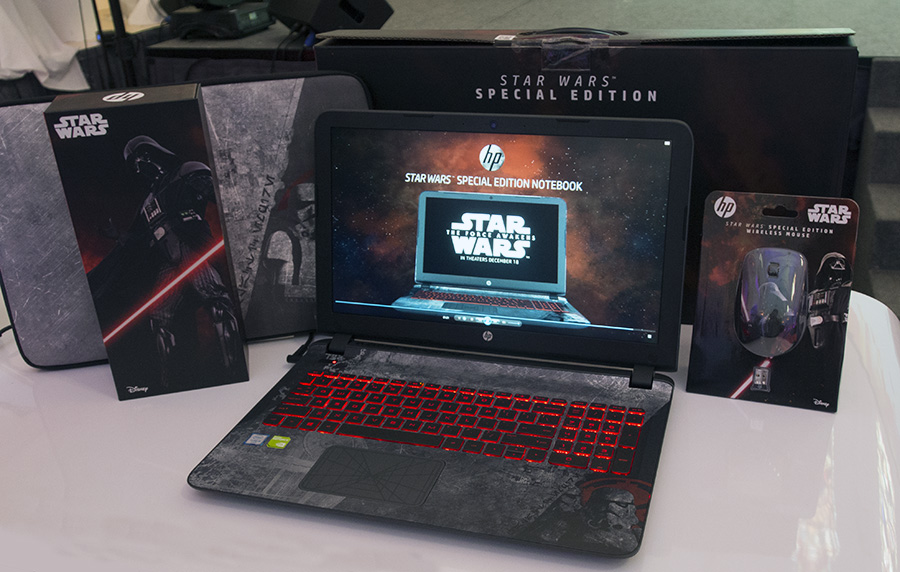 Finally, HP also took the opportunity to show off its limited edition Star Wars notebook, a slew of new printers with added security features, and its new HP Stream notebook.

HP didn’t have the Stream on display, but just know that the 13.3-inch device is ultra-affordable. It is available now at S$349, and may be a good choice if all you need is a cheap PC that works.