Acer Does Triple SIM, Octa-core and Smart Bands at Computex 2014

While not well-known for being a major smartphone player, Acer unveiled a number of interesting devices at Computex 2014. One of them being a “proper” triple SIM smartphone. Granted, the Acer Liquid E700 won’t win any performance benchmarks with its mainstream MediaTek MT6582 1.3GHz quad-core processor and 1GB RAM, but in every other aspect belongs to a full-featured smartphone. It has a 5-inch IPS HD (1,280 x 720 pixels) display with Zero Air Gap design, 8MP f/2.0 rear camera, 2MP front camera and runs on Android 4.4 KitKat. It as 4GB built-in storage, expandable via microSD. For greater compatibility and power savings, it’s only a 3G device. Still with triple SIM slots, Acer put in a larger 3,500mAh battery to help keep the phone running longer. According to Acer, the Liquid E700 can last up to 24 hours of talk time, 60 hours of standby, 12 hours of video and 100 hours of music. The battery is non-removable though. There’s also a Liquid E600 which shares the same design and comes with LTE support, but is a single SIM phone with pared down specs. 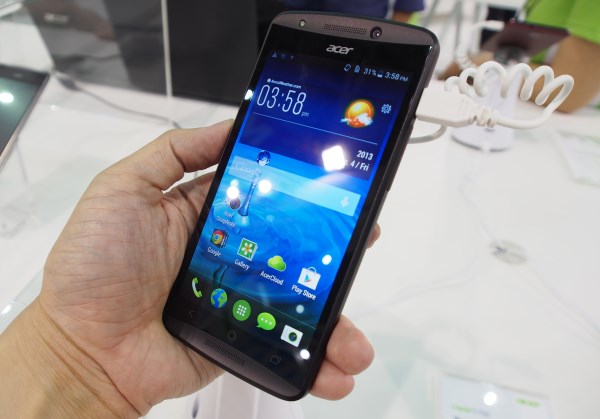 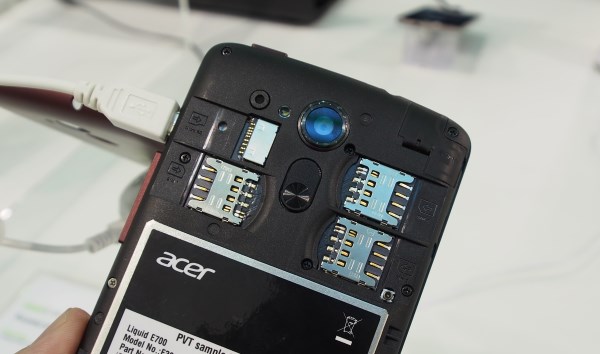 Acer also showcased their flagship Liquid X1 smartphone, which is powered by a 1.7GHz octa-core MediaTek MT6592 processor and runs on Android 4.4 KitKat. Other features include a 13MP f/1.8 rear camera, 2GB RAM, and removable 2,700mAh battery. It has 16GB of built-in storage expandable via microSD. The Liquid X1 supports LTE Cat 4 (150Mbps download) and from its spec sheet, available in single or dual SIM models. It has a 5.7-inch IPS display, but only at 1,280 x 720 pixels resolution. What Acer has going for it are some experience oriented features. Acer Zoom Fit is an interesting feature that shrinks the display down to 4-inches on one corner to facilitate single handed use. AcerRAPID is a shortcut button on the back that can be used to launch the camera, pick up calls or open apps. AcerFLOAT allows overlay multi-tasking without having to close or back out of your existing app. 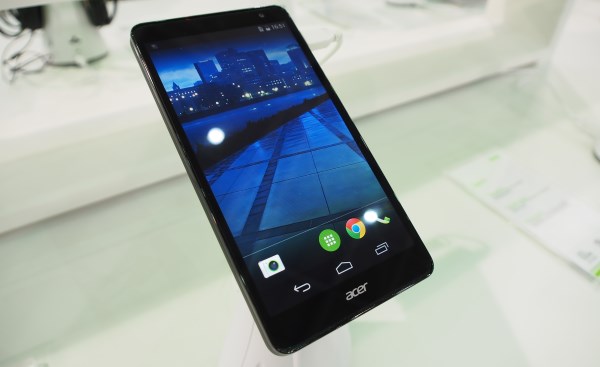 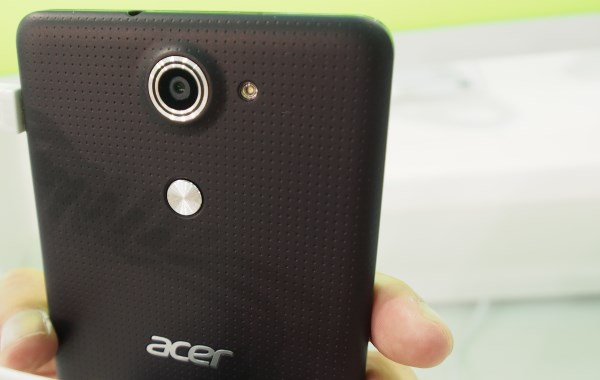 Lastly, Acer showcased their first wearable device. The Liquid Leap smart band features a long, slim design similar to the Samsung Gear Fit, but more compact with a 1-inch touch screen. The Liquid Leap can track steps, distance covered, calories burned and sleep cycles. It also has incoming call and SMS notification as well as access and control your phone’s music library. The Liquid Leap features Bluetooth 4.0 with IPX7 water resistance. It is said to be always on 24/7 with up to 7-days of battery life. It is recharged via a docking cradle similar to the original Samsung Galaxy Gear. 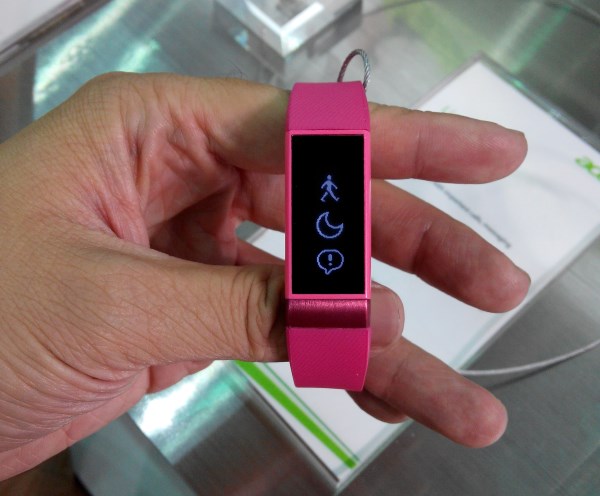 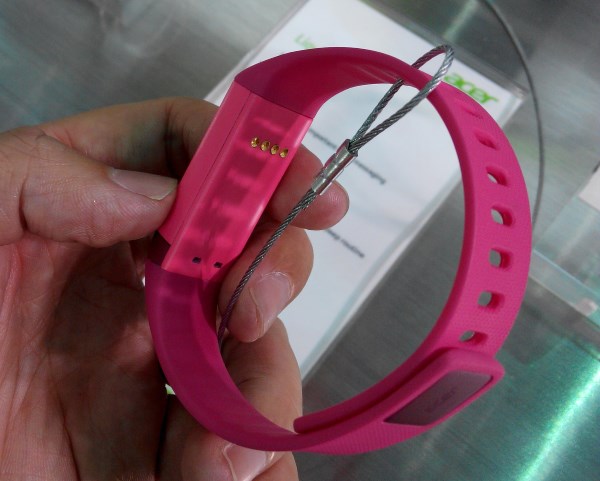 From a quick hands-on, the Liquid Leap functions more like an independent fitness tracker with simple phone controls made possible via Bluetooth rather than a smart watch. It has a single color display with simple icons that should be easily identifiable, The display turns off after a few seconds and you will need to touch the screen to turn it back on. Navigation is simply swiping vertically along its length and tapping on the function you want. From what we saw, it doesn't tell the time. The Liquid Leap comes in a variety of colors: Moonstone White, Mineral Black, Aquamarine, Fragrant Pink, and Vivid Orange. 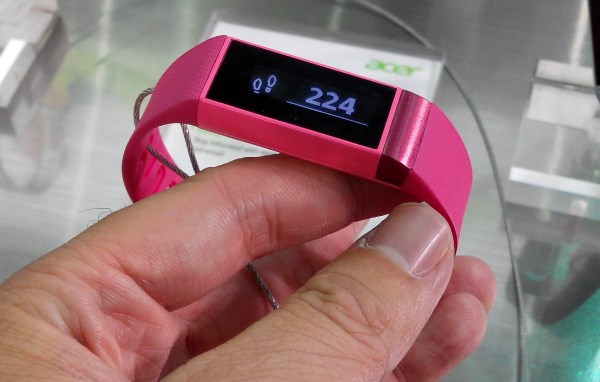 The Liquid Leap will be bundled together with the Acer Liquid Jade, a super slim (7.5mm) and lightweight (63g) smartphone. The Liquid Jade features a 5-inch IPS HD screen, MediaTek MT6582 1.3GHz processor and 1GB RAM similar to the Liquid E700. It also has a non-removable 2,100mAh battery. However, it comes with a 13MP f/1.8 rear camera similar to the Liquid X1. It will run on Android 4.4 KitKat, has dual SIM slots, but no LTE. All Acer devices shown at Computex 2014 should be available by Q3 2014. 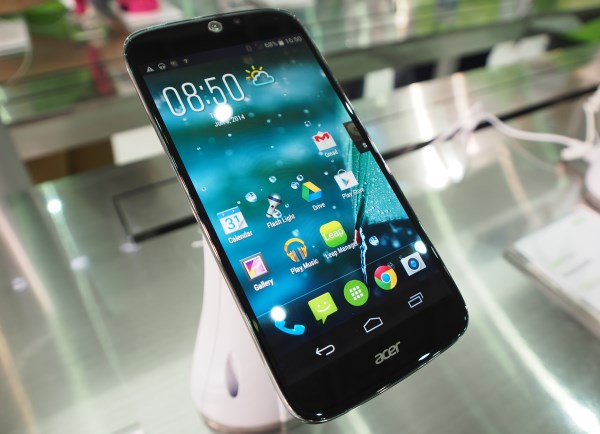