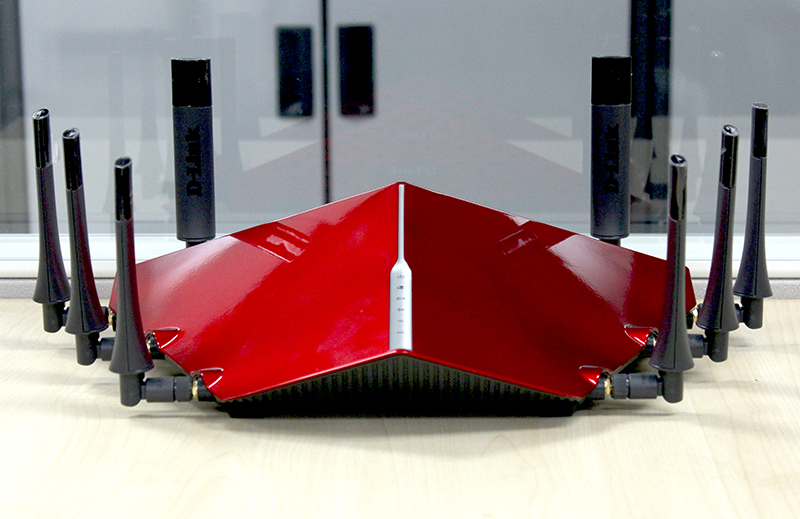 The DIR-895L router’s highly angular and pyramidal design is something that will divide opinions, but most of the people I showed to around the office loved it. There’s no denying that it is a bold and refreshing design, and there’s no doubting that it is a high-performance router. On a whole, I think it will appeal well to the router’s target audience. 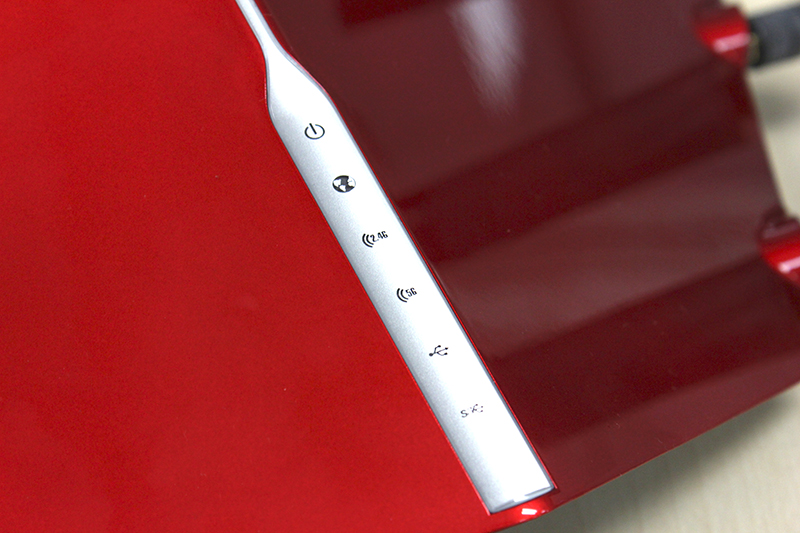 On the front, a silver strip that runs down the middle houses the router’s LED status indicators. However, it only shows the status of your Internet connectivity, wireless networks, and USB connection. This means that if you are having trouble with your LAN connections, there’s no quick way to see what’s wrong.

Behind the router lies the usual single Gigabit Ethernet WAN port and four Gigabit Ethernet ports. The D-Link DIR-895L comes with a single USB 3.0 ports and another USB 2.0 port. The former can be used to connect to storage devices for easy file-sharing or wireless backups, while the latter can be used to connect to printers for wireless printing. The other thing worth mentioning is that the individual Ethernet ports do not have status indicators, which could make troubleshooting tricky. 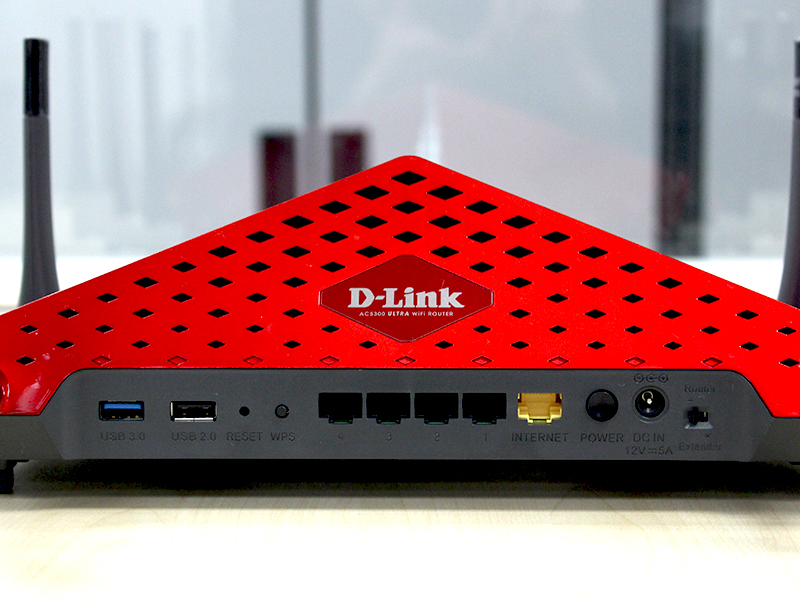 An interesting thing about the DIR-895L router is that there’s a switch behind that changes the mode of the device between “router” and “extender” modes, although that would just make the DIR-895L a very expensive and overpowered Wi-Fi range extender.

Internally, the DIR-895L router features the same innards as other AC5300-class routers. This means it features Broadcom’s 5G XStream chipset, which consists of a 1.4GHz dual-core processor and three Broadcom BCM4366 radios. This allows the DIR-895L router to broadcast a single 2.4GHz network and two 5GHz networks. And thanks to support for NitroQAM technology, the 2.4GHz network supports speeds of up to 1,000Mbps, while the 5GHz networks support speeds of up to 2,167Mbps each, giving the router a total bandwidth of 5,334Mbps. Of course, to support these kinds of speeds requires compatible client devices. 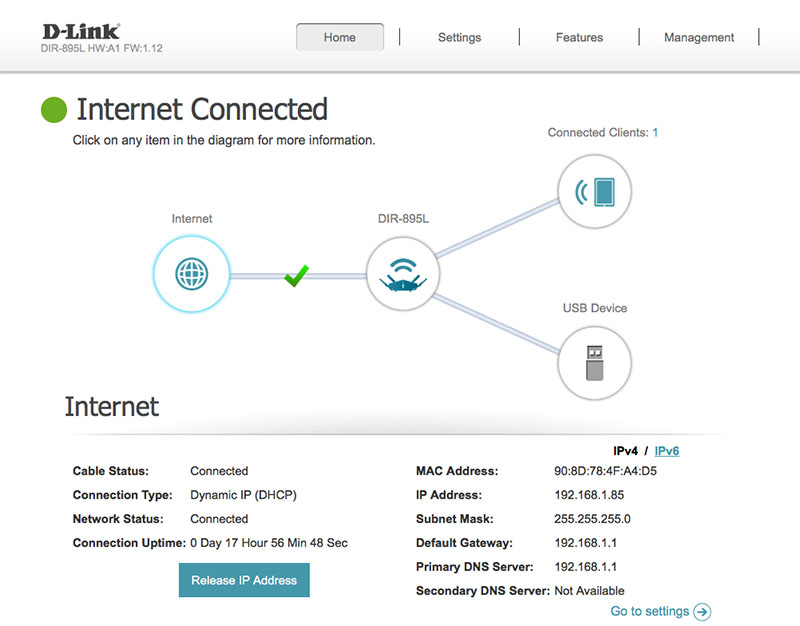 Like most other D-Link routers, the DIR-895L router comes pre-configured right out of the box, with the wireless SSID and password printed on a label that’s under the router. But if you wish to get your hands dirty, D-Link’s setup interface is less intimidating and slightly more straightforward to use. It also has all of the features you would expect to find from a high-end router such as Port Forwarding, Firewall, QoS, Parental Controls, guest access, cloud storage via SharePort, and more.

However, some of its features are more simplistic when compared to its rivals. For example, the DIR-895L’s QoS feature isn’t dynamic and only allows you to prioritize connections based on devices or applications. Some of its competitors have QoS implementations that are dynamic and can recognize and prioritize traffic based on usage scenarios. 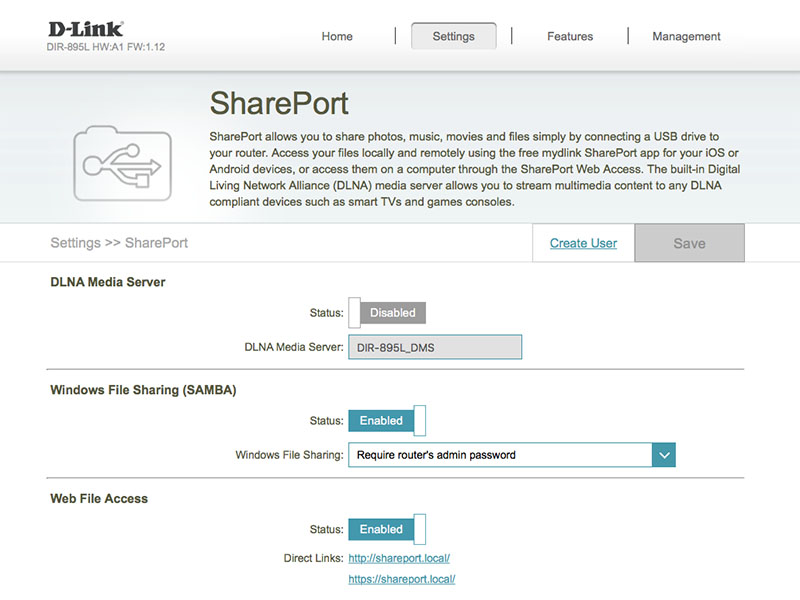 The DIR-895L router also features remote router management via the mydlink Lite app. But in truth, the implementation is very basic and simplistic and doesn’t really let users do anything other than check on its status and rebooting it remotely. In comparison, Linksys’ remote router management app can even allow users to edit parental control settings, update firmware, change Wi-Fi settings and more. 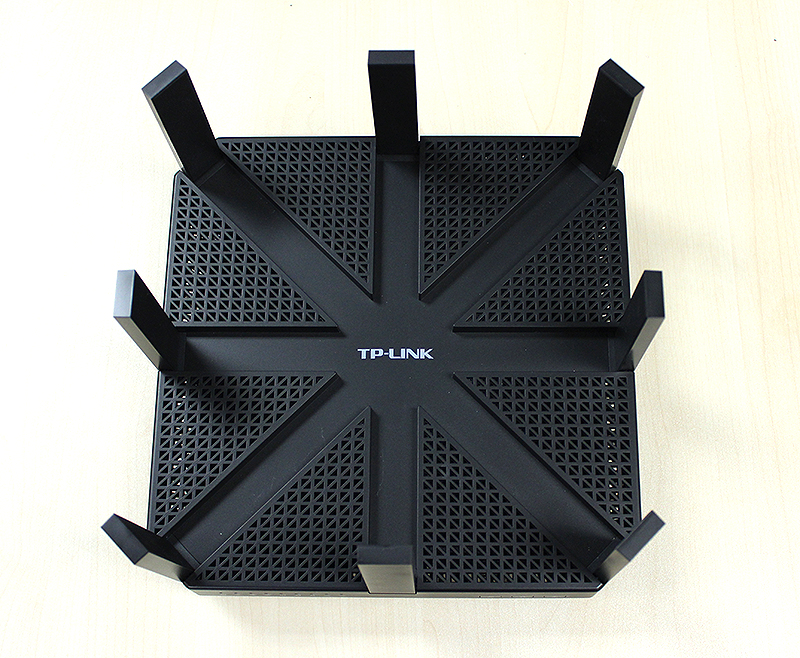 One neat thing about the Archer C5400’s design is that while the antennas are non-removable, they can be folded away neatly into specially cut-out “tunnels” in the top panel of the router. For users who prefer a more streamlined look, they can simply fold the antennas away. The top panel is also perforated to provide ventilation and to allow heat to escape. 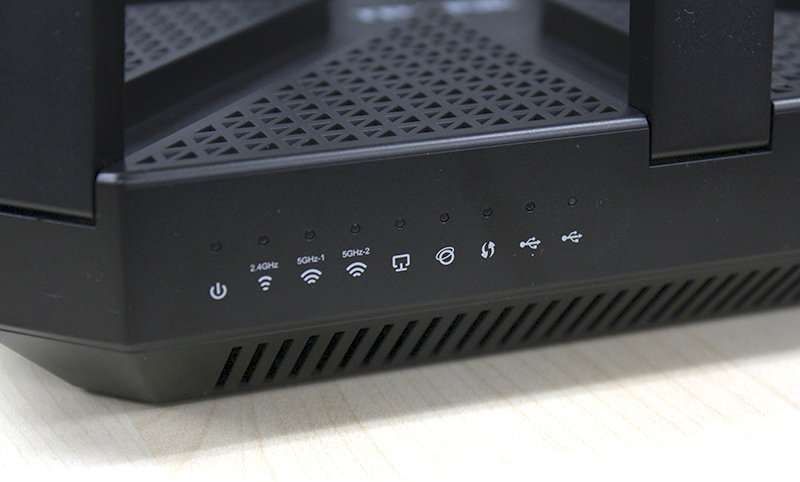 The front panel is where users will find a row of LED status indicators, which are less comprehensive that we would have liked them to be. This is because there are no individual indicators for the Gigabit Ethernet LAN ports. So if the lights for the LAN ports go off, you’ll need to spend some time to figure out exactly which port is not working properly. That said, each of the three broadcasted networks has its own status indicator. Besides the LED indicators are buttons to turn Wi-Fi on and off, the LED indicators on and off, and WPS setups. 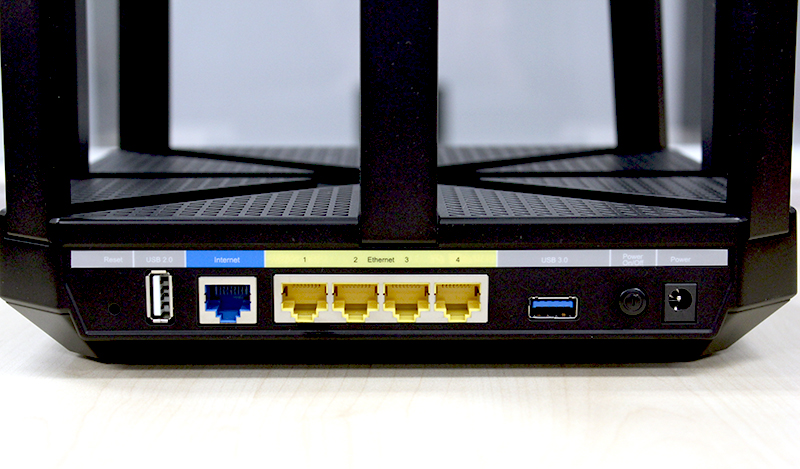 Behind the router, users will find all the ports and buttons clearly labeled. There are a single Gigabit Ethernet WAN port and four Gigabit Ethernet LAN ports, which is standard fare for most routers. There’s also one USB 3.0 and another USB 2.0 port, which can be used to connect to printers or external storage devices for wireless backups and file-sharing. It’s worth noting also that the Gigabit Ethernet LAN ports do not have LED indicators of their own either, which can be a problem for users if they need to troubleshoot connection issues. 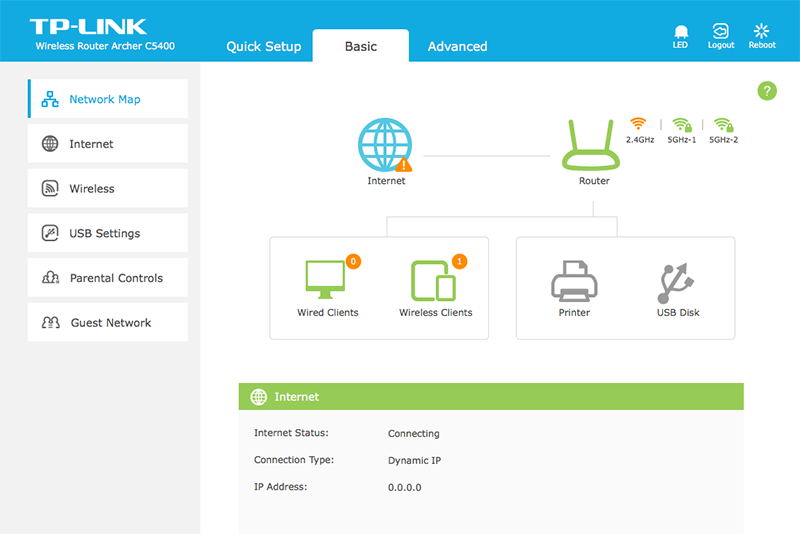 Like the D-Link DIR-895L router, the TP-Link Archer C5400 comes preconfigured with a sticker at the bottom indicating the pre-configured SSID and passwords. For users who wish to tinker around, the Archer C5400’s setup user interface is easy to use and features a very refreshing and light color scheme. There’s two main menus - Basic and Advanced - and users will be happy to know that the Archer C5400 has all the usual options that can be found on high-end routers like QoS, parental controls, port forwarding, guest networking, VPN, and more.

The Archer C5400 has a much improved setup interface compared to the Archer C3200 we reviewed previously. For example, the implementation of QoS is much more user-friendly. On the Archer C3200, you would have to manually define the IP and the range of ports of applications, but on Archer C5400, it has a much more easy to setup device-based QoS system where users would simply rank their connected devices in order of priority. 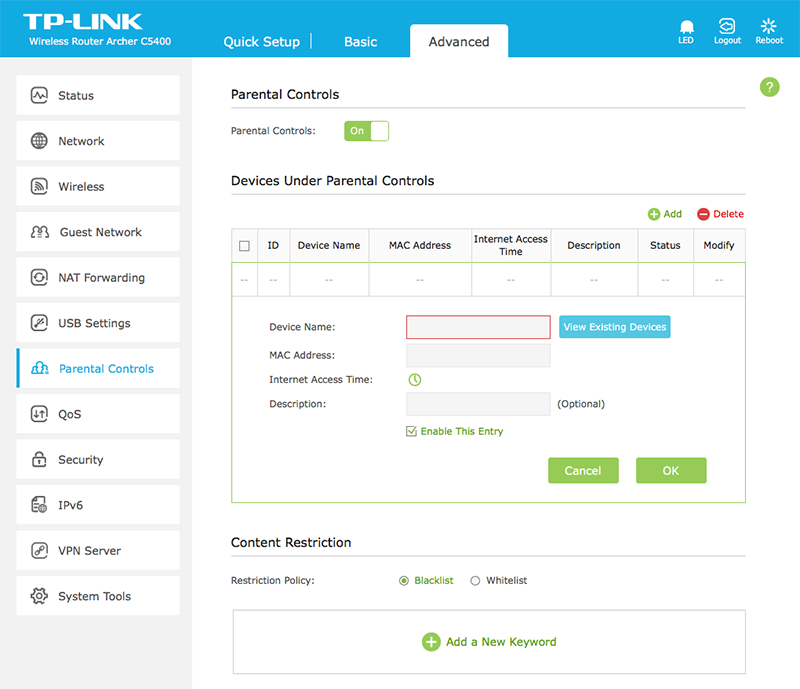 Parents will also be happy to know that the Archer C5400 has an elaborate Parental Control feature where administrators can set thorough schedules for connected devices. Users can also list specific domains to be blocked.

And like most high-end routers today, the Archer C5400 can also be remotely controlled and managed using TP-Link’s Tether app, which is available as a free download for iOS and Android devices. The app is a pretty basic one but it shows you a network map that lets you see devices connected to your router, and also allows you to manage your Wi-Fi and guest networks settings, and also activate or deactivate your parental control settings.