Linksys is one of the most storied and recognizable names in networking, but it has languished after it was acquired by Cisco in 2003. Fortunately, Belkin came to rescue and purchased Cisco’s Home Networking Business Unit, which included Linksys, in early 2013. And one of the first and arguably the most important product Linksys introduced after the acquisition was the WRT1900AC router. We previewed this router last year, but its worth going over its main features now. 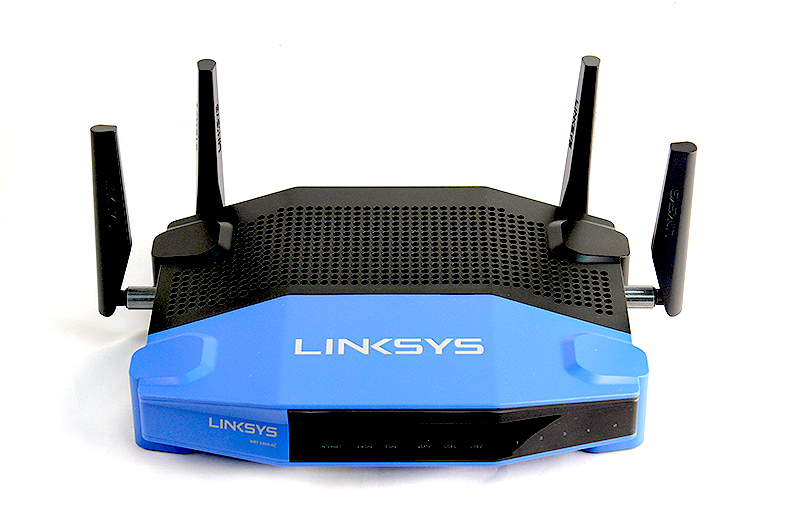 If the name and looks of this router seems familiar to you it is because this new WRT1900AC pays homage to the legendary WRT54G router from 11 years ago. Amazingly, the WRT54G router is still available for sale. And according to Linksys, over 50 million units of the WRT54G has been shipped, which easily makes it one of the best selling routers of all time.

Inside, the WRT1900AC router is powered by 1.2GHz dual-core Marvell Armada MV78230 SoC. 2.4GHz and 5GHz radio duties are handled by the Marvell 88W8864 chipset, one of the few 4x4 chipsets in the market. It still supports only 3 spatial streams though, so the maximum data transfer rate is still 1.3Gbps on the 5GHz band and 600Mbps on the 2.4GHz band. The extra transceiver and receiver in the chipset is used mostly for redundancy and to ensure better reliability in transmitting and receiving data.

Additionally, the fast Marvell SoC in the WRT1900AC is complemented by 256MB of RAM and 128MB of flash memory, which is de rigeur for high-end routers these days. The 128GB of flash will come in handy for more tech-savvy users who want to load open source firmware on the router. And as mentioned in our earlier preview article, Linksys has already shared an SDK as well as two pre-built firmware images for other enthusiasts to modify. 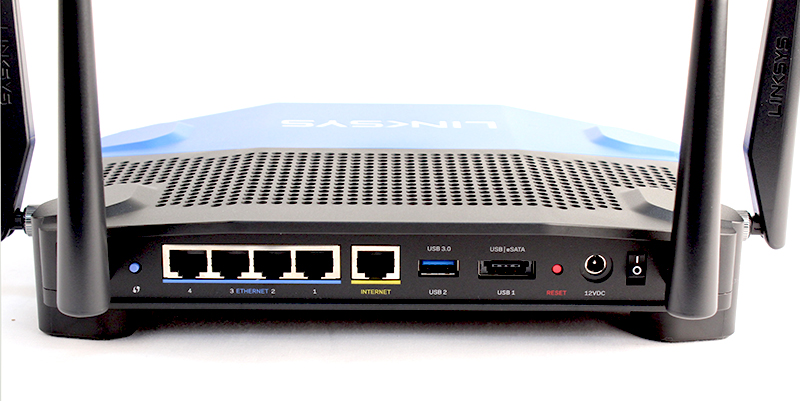 The design of the WRT1900AC is clearly inspired by the WRT54G and so features the same blue and black color scheme, horizontal placement layout, and LED indicators on the front-facing panel. If you are into retro design, the WRT1900AC router will appeal to you. However, it is very large and heavy, measuring over 24cm in width and weighing nearly a full kilogram. Wall mounting is technically possible, but it would certainly require heavy-duty double-sided tape.

Behind the router is the usual assortment of ports: a single Gigabit Ethernet WAN port and four Gigabit Ethernet LAN ports, USB 3.0 port and a USB/eSATA combo port. There’s also a small button for WPS setups. Unlike some of its rivals, there are no buttons that allow users to instantly turn off Wi-Fi or the front LED indicators. 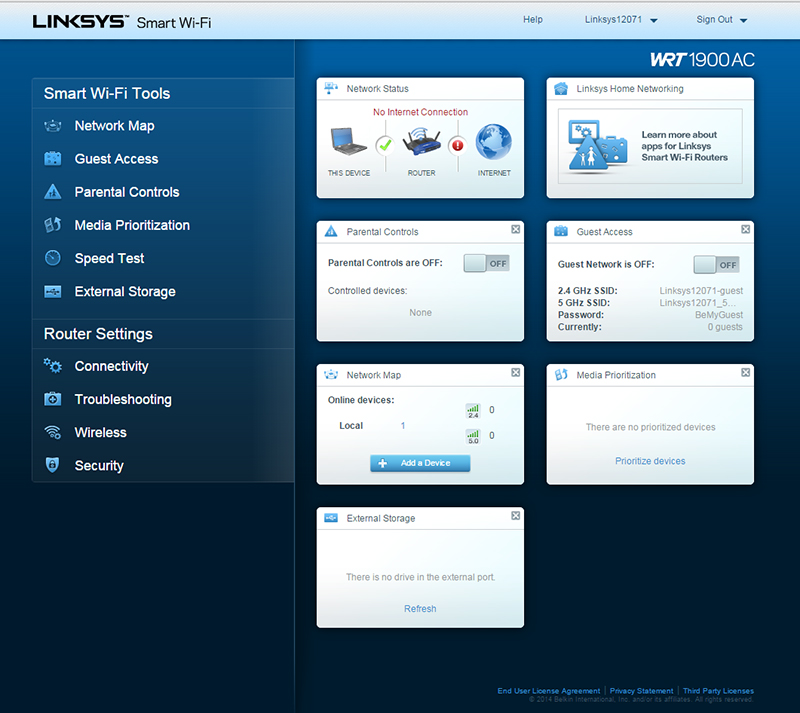 Since the WRT1900AC router is classed as one of Linksys’ Smart Wi-Fi router, setting up was a breeze thanks to Linksys’ easy-to-use Smart Wi-Fi user interface. Thanks to its use of easy to understand graphics, we would argue that this is one of the most user-friendly interfaces around. It has all the features one would expect from a high-end router including real-time traffic monitoring, parental control, cloud storage, QoS and more.

Only the fastest routers from Netgear are bestowed with the “Nighthawk” name. And as we found out previously, the Netgear’s latest Nighthawk X4 router was an absolute beast of a router while it came to pure downlink performance. And so we are taking a look at what preceded the Nighthawk X4, the AC1900 Nighthawk Smart Wi-Fi router, otherwise known more simply as the Nighthawk R7000. 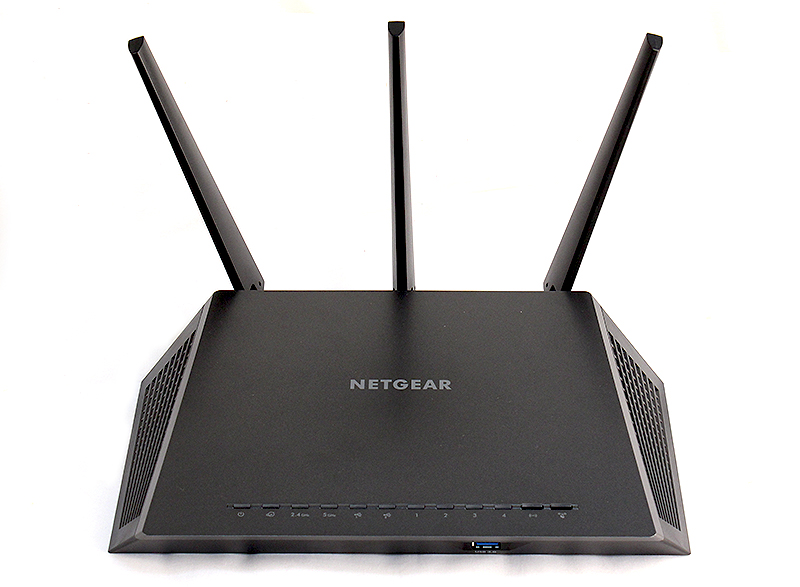 As for design, the Nighthawk R7000 looks like a mirror image of the recently reviewed Nighthawk X4, but with three external antennas instead of four. Both feature highly angular facades, vents by the side, and even have the exact same dimensions. The only difference is the placement of the ports. The front-facing panel also features a row of LED status indicators that lets users know immediately if something has gone wrong. To the right of the indicators are also two very discreet buttons for WPS setup and to turn the Wi-Fi network off. Aesthetically, it looks pleasant and fitting for a high-end router. Plus, its design also allows users to either place it horizontally on surfaces or mount it on walls - good double-sided tape is a must as it weighs about 750g.

Most of the ports are located on the rear of router. Turning the router behind, users will find four Gigabit Ethernet LAN ports and a single Gigabit Ethernet WAN port - standard fare for most routers these days. There’s also a USB 2.0 port for users to connect to printers or external storage devices for sharing over the network. The Nighthawk R7000 also has a USB 3.0 port, but that is located up front just below the row of LED status indicators. While this makes the port more accessible, it also breaks up the router’s good looks if one were to connect something like an external storage device to it. Furthermore, we cannot think of a scenario where one would need to constantly connect and disconnect devices from the router. 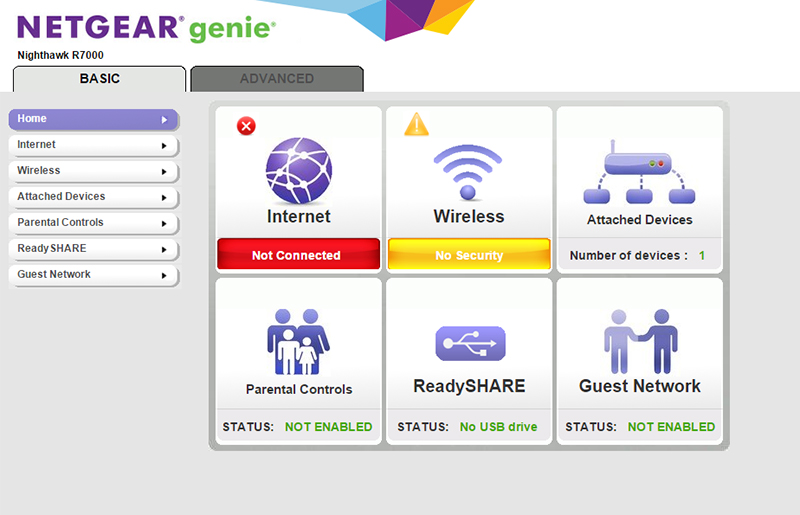 Netgear routers usually come preconfigured, with a sticker on the router indicating the SSID and password. So if you are not a fussy user, the Nighthawk R7000 router is just about as plug and play as it can get. However, if those who do want to tweak around, Netgear’s Genie setup interface is mostly straightforward to use and easy enough to navigate even if you don’t consider yourself to be tech-savvy. For advanced users, the Nighthawk R7000 has all the usual features including VPN support, advanced wireless settings, traffic monitoring, parental controls and QoS.

On top of this, there’s also a Genie app for iOS and Android devices. The Genie app lets users remotely control and manage the router, but it is missing some features. For example, using the app we could only edit settings of the 2.4GHz band and not the 5GHz band. That does not mean that the app is entirely useless. It can be used as a quick way to check your network map and see what devices are connected to the router and it can also be used to monitor your traffic.