Note: This article from 4th March 2015 was re-published on 27th December 2015 and again on 9th July 2016 as it is one of our popular reads and the products compared are still relevant. If you've been thinking of upgrading your home network, this shootout will be most handy and is still applicable.

If you have been following our networking section closely, you would know that AC3200 and AC2400 are the two latest classes of wireless routers. Although these two new classes of routers profess to offer greater performance, the way they work and their philosophies are very different. AC3200 is all about offering bandwidth to support a greater multitude of devices, whereas AC2400 is all about raw speed and the benefits that 802.11ac Wave 2 class hardware will bring. To get up to speed, we suggest reading our guide to Wireless 802.11ac networking where we've detailed the evolution and jargon of this class of wireless networking.

Despite the existence of these new routers, older AC1900 class routers are far from obsolete and are still great buys in our opinion. To begin taking advantage of AC2400 routers require compatibles clients, of which there are none in the market right now. And while AC3200 routers are great for households with many connected devices, these new routers are big and extremely pricey at this point of time. And its benefits might be not readily appreciated unless you have a household with many devices and heavy users. Besides, AC1900 routers are certainly no slouches. A maximum data transfer rate of 1300Mbps on the 5GHz band is still the theoretical maximum supported by clients today, so you are not really missing out anything. Plus, remember that most mobile devices - smartphones, tablets and even most notebooks- typically only have 1x1 or 2x2 wireless chipsets, which means even they cannot maximize the potential of AC1900 routers. And with most of these routers already out in the market for some time, this means there price reductions and savings to be had, which makes them better value buys for most users. As a result, we are revisiting AC1900 routers by rounding up the best from the top names in networking.

The ASUS RT-AC68U is actually one of the older AC1900 class routers in this shootout. In fact, if you have been a keen reader of our site, you would probably remember that we reviewed it back in November of 2013. However, that test was conducted using our old testbed and testing methodology. And since the RT-AC68U router was one of the faster performing routers we have tested, we have decided to include it in this shootout to act as a reference. Besides, it is still one of the most popular selling routers in our local market. 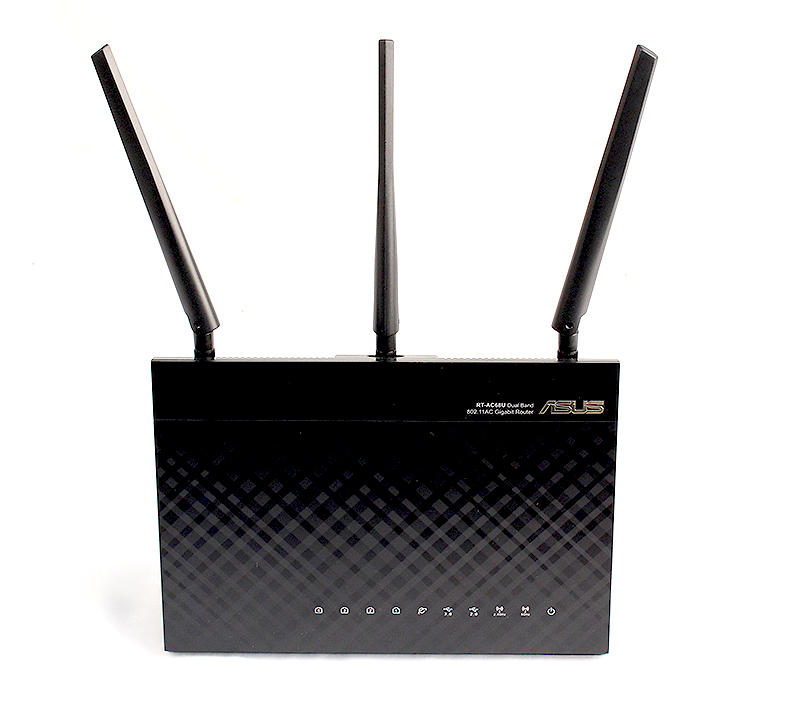 To refresh readers' memory, the ASUS RT-AC68U is powered by a dual-core Broadcom BCM4708A SoC running at 800MHz and paired with 256MB of RAM and 128MB of flash memory. Radio duties are handled by the Broadcom BCM4360 chipset, which supports 3x3 streams and offers up to 1.3Gbps of throughput on its 5GHz band. And since it supports Broadcom’s proprietary TurboQAM technology, it can also offer up to 600Mbps of throughput on its 2.4GHz band, but only if paired with a compatible Broadcom client - otherwise data transfer rates on its 2.4GHz will remain at 450Mbps.

The RT-AC68U shares many of the design elements of other ASUS flagship routers. It is highly angular and has a front-facing panel that is decorated with a checkered-style motif. It looks fresh and futuristic even today, almost 1.5 years after its launch. The front-facing panel also features a row of LED indicators, which allows users to quickly check on the router to know if everything is working properly. There is also a button behind the router that lets users turn off these lights, should they be too distracting. A point to note is that unlike the model it replaces - the RT-AC66U - the RT-AC68U router features a built-in stand and so can only be positioned vertically. This, coupled with its massive antennas, means that users must ensure there is enough headroom to position the router. 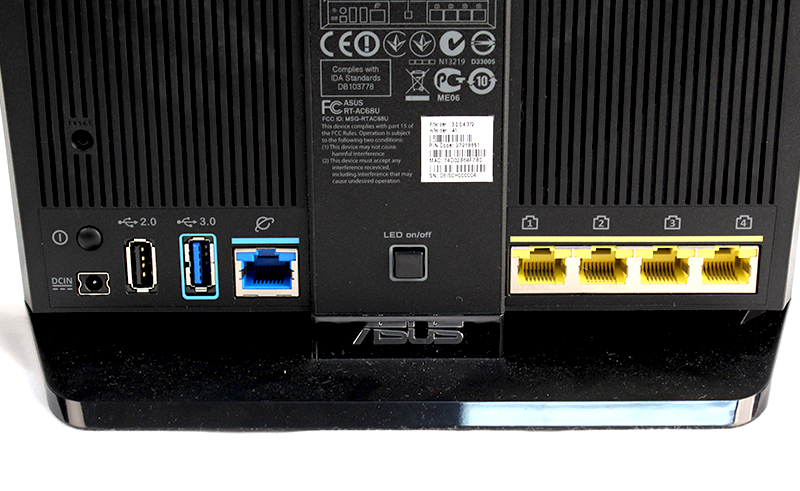 Other things to note include the two buttons to the side of the router. One of them is for WPS setup, while the other instantly turns off the wireless network. Behind the router, users can find the usual assortment of Gigabit Ethernet ports and more. There are the usual four Gigabit Ethernet LAN ports and a single Gigabit Ethernet WAN port, and a single USB 3.0 port and another USB 2.0 port. The USB ports can be used to connect to printers for wireless printing or external storage devices for file sharing or for cloud storage via ASUS' AiCloud 2.0 feature. 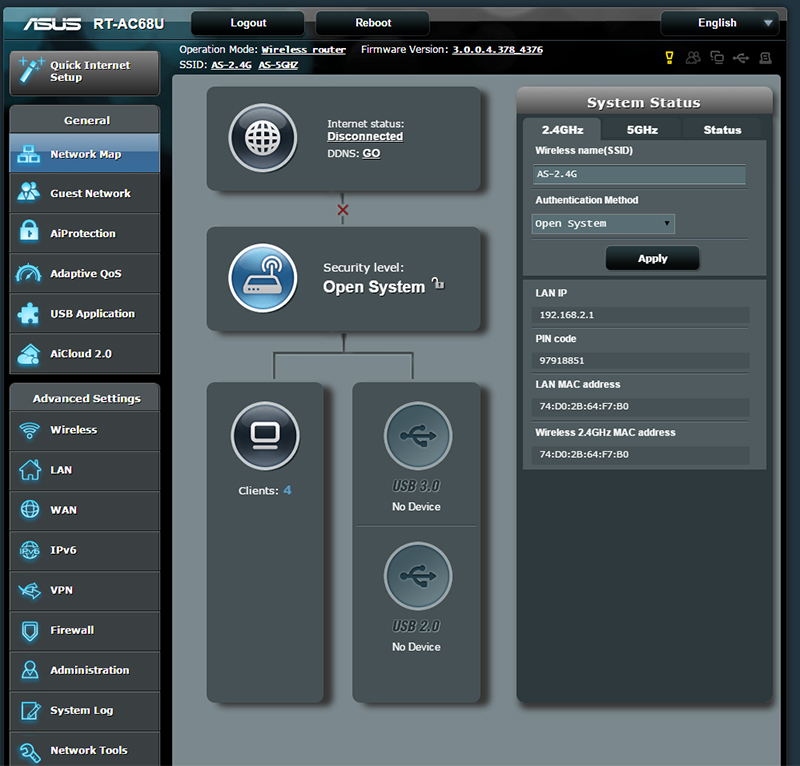 Setting up the router is done using the familiar ASUSWRT interface, which has been consistently improved and refined over the years. It’s one of the most straightforward, easy-to-use and comprehensive setup interfaces around, though not the prettiest. Furthermore, a recent firmware update has enabled new features such as Adaptive QoS and Ai Protection, which debuted on the newer AC2400 RT-AC87U router, on the RT-AC68U. It also has features such as real-time traffic monitoring, VPN support, parental controls, and cloud storage functionality via ASUS’ own AiCloud utility.

Amongst all the routers here, the D-Link DIR-880L was the latest to the game and was only released in October last year - more than six months after the other routers. Like ASUS, D-Link’s roots are in Taiwan, but unlike ASUS, the company is focused solely on networking products. And while they may not be first to the market with the latest technology, they have a reputation amongst consumers for offering decently priced routers with good performance. Routers aside, D-Link is a leader in the field of IP cameras and has recently expanded it product portfolio to include smart home devices. 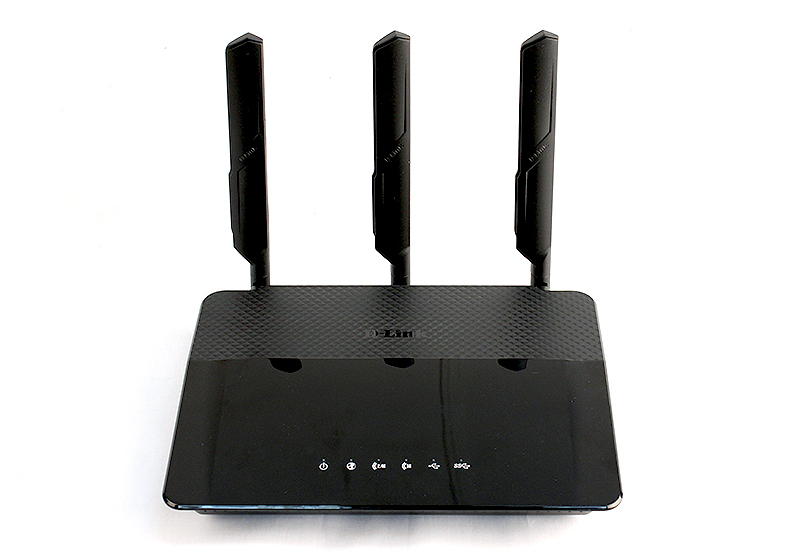 Internally, the D-Link DIR-880L router shares the same components as the ASUS RT-AC68U. This means it is also powered by a dual-core Broadcom BCM4708A SoC running at 800MHz, and has 256MB of RAM and 128MB of flash. 2.4GHz and 5GHz radio duties are taken care of by the Broadcom BCM4360. What all of this translates to is a maximum data transfer rate of 1.3Gbps on the 5GHz band and 600Mbps on the 2.4GHz band - the same for all AC1900 class routers.

If you have been following D-Link, you might realize that its new DIR-880L router eschews the cylindrical design of its predecessors and instead opts for a more conventional flat-piece design with external antennas. Like its rivals, the DIR-880L has three external antennas and they are the largest we have seen, resembling miniature oars. While the cylindrical design of older routers were more aesthetically pleasing and compact, this new design gives users more flexibility with placement. It can be placed horizontally on surfaces or it can be wall-mounted (the DIR-880L comes with wall-mounting accessories). However, strong double-sided tape is definitely required for wall-mounting since the router weighs quite a fair bit at 745g. 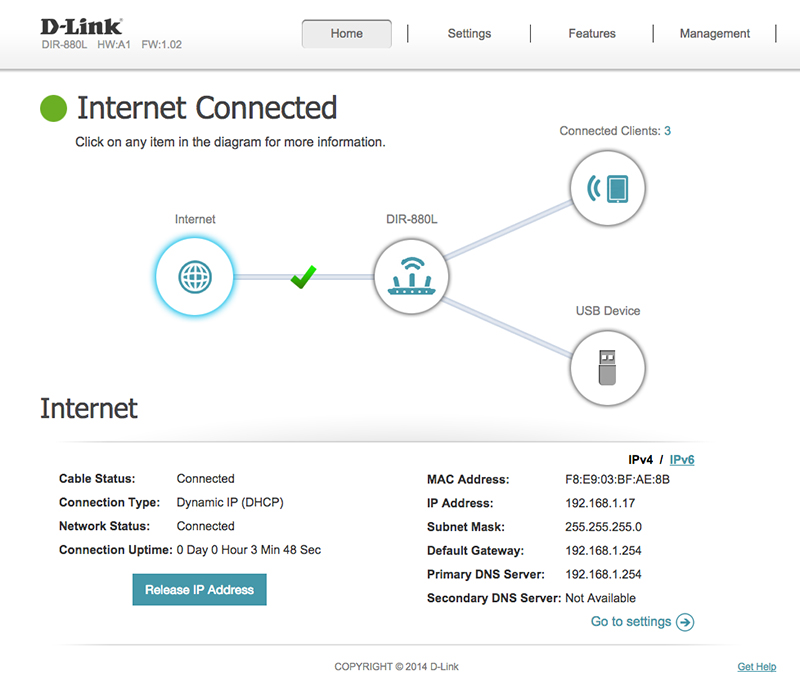 Setting up the router was a pain-free process since D-Link’s setup user interface was easy to navigate and speedy too. Users can also downlink the mydlink Cloud app (free for iOS and Android devices) to remotely control and manage their routers. However, like its competitors, the implementation of such apps still leaves much to be desired since some features are missing from the app. D-Link also offers another app called SharePort that lets users access files on external storage devices connected to the router using their iOS or Android device.

Apps aside, the user interface has features that one would expect from a high-end router including real-time traffic monitoring, port forwarding, VPN support, and QoS. We especially like D-Link’s QoS implementation, which is similar to Linksys’ in that it lets users prioritize connections based on devices as opposed to application, service types or ports. This makes QoS much easier to setup and arguably more useful.