We'll be using Netgear's A6200 802.11ac USB adapter for our throughput tests to reduce the number of variables involved. The Netgear A6200 USB adapter supports up to two spatial streams for a maximum data transfer rate of 866Mbps - the maximum for USB adapters currently. Hence, if your system has a more advanced wireless chipset that supports three spatial streams, you can expect even higher speeds.

Here is a graphical representation of our network test setup.

To evaluate, we will be using a mix of synthetic benchmarks and real-world testing. The synthetic benchmark we are using is called Lan Speed Test. As for real-world testing, we will be measuring the routers’ speeds in transferring a 1GB zip file. We will do multiple tests at difference distances to simulate use around a typical home. For the 5GHz band, we also measured how performance is affected if two clients are connected and uploading and downloading data at the same time. Here are the test distances we used and what they represent.

We begin our performance analysis by looking at both routers’ performance on the 2.4GHz band using Lan Speed Test and the difference was quite stunning. The ASUS RT-AC87U was clearly the faster router as its uplink and download transfer rates were consistently twice as fast or more than the Linksys E8350 across all distances.

This was confirmed in our real world test scenario too, where the ASUS RT-AC87U could be almost as much as three times faster than the Linksys E8350. For example, during the file transfer test and at a distance of 5 meters, the RT-AC87U managed 44.20Mbps whereas the E8350 could only muster 15.84 Mbps. Additionally, the E8350 could not complete the file transfer at a range of 17m.

As for file transfer, the ASUS RT-AC87U offered extremely good downlink speeds too at close ranges, achieving 205.13Mbps at two meters and 173.91 Mbps at five meters, whereas the Linksys E8350 managed 142.86Mbps and 150.94Mbps at the same respective ranges. Additionally, we also noticed that the E8350 suffered a noticeable drop in performance at 17m - nearly 40% drop going from 13m to 17m.

As for our performance load test, the Linksys E8350 managed a consolation win even if the difference was very minute. In this test, the E8350 recorded 76.19 Mbps, whereas the ASUS RT-AC87U did 72.73 Mbps.

Before we offer our concluding thoughts to the routers, we need to clarify something with regards to these AC-2400 class routers. Firstly, AC-2400 routers are arguably the fastest routers available today with support for up to 1733Mbps on its 5GHz band. AC-3200 routers, despite the higher speed rating, will only manage a maximum of 1300Mbps, since its two 5GHz bands are independent and do not combine for higher throughputs.

Secondly, while AC-2400 do theoretically offer up to 1733Mbps data transfer rates, one thing to note is that there is currently no device in the market that can support it. This is because most Wireless-AC compatible devices in the market right now support mostly only two or three spatial streams - 1733Mbps can only be achieved with a compatible device that supports four spatial streams. That said, we are expecting compatible devices to be available in the near future. ASUS, for example, already has a compatible adapter in the works called the EA-AC87 that we will be looking to test in the near future. 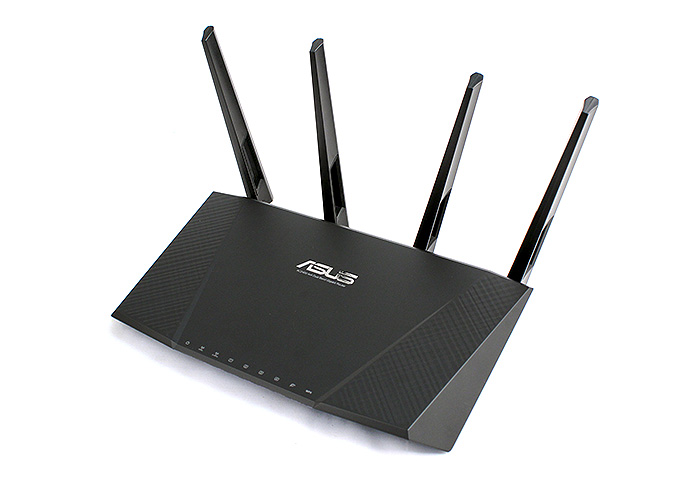 Looking at the two routers at hand, the ASUS RT-AC87U is the clear leader in terms of performance. The RT-AC87U consistently outperformed the Linksys E8350 in both uplink and downlink tests and across both our synthetic and real-world test benchmarks. Furthermore, the Linksys E8350’s performance on the 2.4GHz band was particularly disappointing and trailed the RT-AC87U by a considerable margin.

Performance aside, the Linksys E8350’s feature set is also weaker than the ASUS RT-AC87U. The lack of some sort of cloud functionality is quite glaring, as is the ability to monitor real-time traffic usage. And this is especially exasperating considering such features were available on the older Linksys EA6900 router. There is no such issues with the ASUS RT-AC87U, which has all this and more, including a new integrated protection utility called AiProtection and improved cloud storage functionality via AiCloud 2.0.

But what really lets the Linksys E8350 down is its asking price of S$399, which is identical to the ASUS RT-AC87U. Considering their performance and features, we can think of no reason why one should pick the E8350 over the RT-AC87U. In fact, if you are an enthusiast who demands the latest and greatest in technology and want a router that will remain relevant for the foreseeable future, the RT-AC87U is a fine pick and has set a very high mark of other routers in this class to beat.