A new wave of Wireless-AC

First things first, the new breed of AC-2400 routers that you see coming into the market are actually the first to support what is unofficially known as 802.11ac Wave 2. The AC-2400 speed rating is derived from the combination of its maximum data transfer rates of its dual 802.11ac and 802.11n bands and some generous rounding up. The numbers you are interested in are 1733Mbps on Wireless AC and 600Mbps on Wireless N. Explaining the differences between these routers and existing Wireless AC routers will take an entire feature - which will happen at a later time, so stay tuned - but in a nutshell, 802.11ac Wave 2 routers will offer support for up to four spatial streams and will also support MU-MIMO (Multiple-user Multiple Input Multiple Output).

Current Wireless-AC routers support only three spatial streams, it is the additional fourth stream that lets these AC-2400 routers attain its maximum data transfer rate of 1733Mbps on the 5GHz band. Each stream still supports a maximum data transfer rate of 433Mbps. On the other hand, MU-MIMO will allow the router to deliver data to multiple devices at once. Unknown to many, most routers in the market right now can only send data to one device at any one time. In theory, MU-MIO can help reduce the “waiting time” if you have multiple devices connected to the router. We will expand on this in a more fleshed-out feature in future, but for the time being, known that these AC-2400 routers are the first 802.11ac Wave 2 products to hit the markets and they do offer some important performance enhancing features.

And with that we will turn our attention to the two routers we have on hand today, the ASUS RT-AC87U and Linksys E8350. Both tout maximum data transfer rates of up to 2400Mbps and are their respective companies’ newest and fastest routers. We begin with the ASUS RT-AC87U. 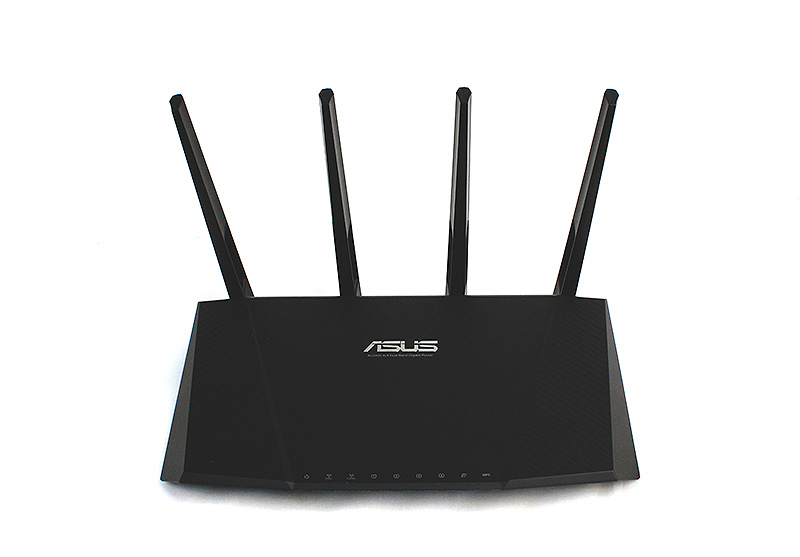 ASUS’ has become one of the most successful names in home networking and has released a string of hits beginning with the revered RT-AC56U router from 2010. That router was followed by the equally stunning RT-N66U, RT-AC66U and last year’s RT-AC68U. Each of these were amongst the fastest routers in the market and we were intrigued to see what they could up with next.

Earlier this year in August, ASUS finally released the successor to the RT-AC68U, the RT-AC87U. This new router is part of the first wave of 802.11ac Wave 2 products and supports up to 2400Mbps on both its 2.4GHz and 5GHz bands.

Inside, the ASUS RT-AC87U employs a 1GHz Broadcom BCM4709A SoC that features two ARM Cortex-A9 cores. The Broadcom BCM4709A is actually very closely related to the BCM4708A found in the older RT-AC68U. And like its predecessor, it also has 256MB of RAM. However, the key component in this router is arguably the Quantenna QSR1000 chipset that powers the 5GHz radio, which enables up to four streams for a maximum data transfer rate of 1733Mbps. 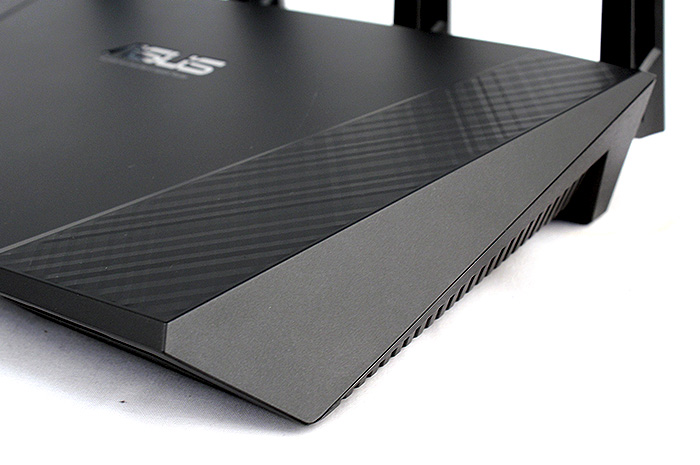 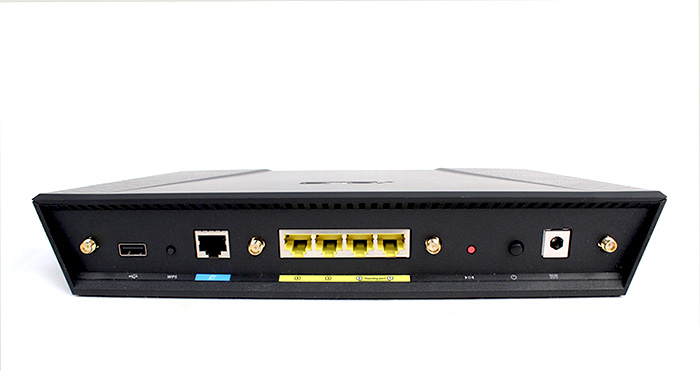 ASUS’ routers have typically been aesthetically exciting and the new RT-AC87U is no different. It is very angular and looks thoroughly futuristic. While it looks undeniably cool, there is no escaping the fact that it is also a very big and wide router - it measures around 30cm in width. Furthermore, its design necessitates a horizontal placement and we also think that it will look a bit odd if mounted on walls. Adding to its already large footprint are its humongous antennas, each of which is around 16cm long. This can make placement tricky, especially if you are short on space. 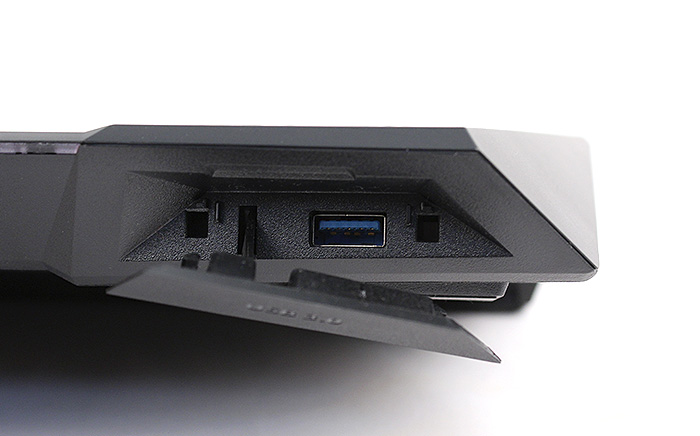 Round the back, users can find the usual single Gigabit WAN port and four Gigabit LAN ports for wired connections. There is also a USB 2.0 port, WPS setup button, reset button and power button. If you are wondering where the USB 3.0 port, it is actually up front, which is an odd place to put it because we think it will break up the router’s good looks if you decide to connect an external storage device. Hidden in front on the opposite side are also buttons to instantly turn off the LED status indicators and Wi-Fi. 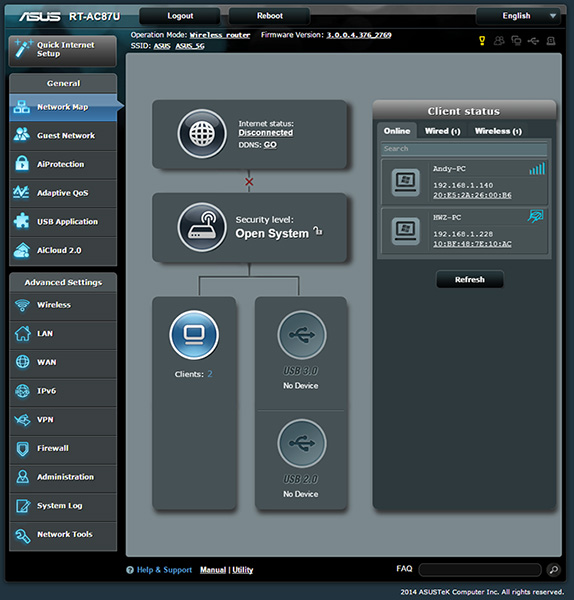 As for setup, ASUS’ uses its familiar ASUSWRT interface, which has been consistently upgraded and improved over the years. The current iteration is straightforward to use and also speedy and responsive. Most users would be able to setup the router and have everything running in just minutes. Additionally, as befits ASUS’ flagship router, the RT-AC87U comes choke full with useful features, but the two most interesting are AiCloud 2.0 and AiProtection. AiCloud 2.0 is ASUS’ updated cloud storage manager that allows users to access external storage devices connected to the RT-AC87U from anywhere in the world using an accompanying app that is available for free on both the App Store and Google Play. AiProtection is a new security feature that actively scans data coming into the router for malware and viruses. 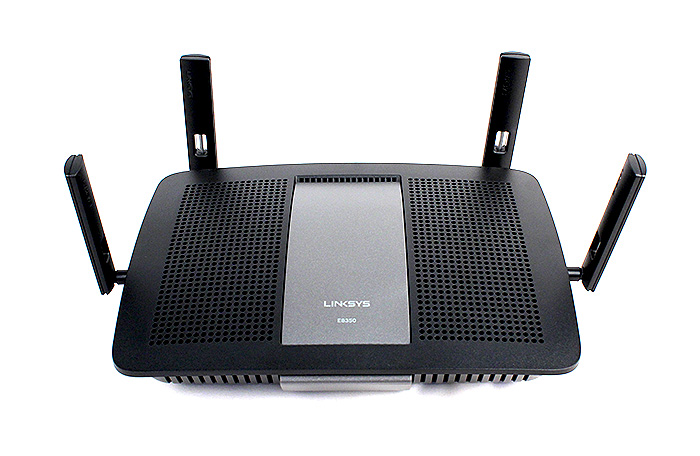 As one of the most storied names in networking, it is only fitting that Linksys was one of the first few brands to release an AC-2400 class router. In fact, a year on from its acquisition by Belkin, 2014 can be said to have been a fruitful year for the brand, who, earlier this year released the WRT1900 AC router.

The E8350 was actually part of a double whammy that also saw Linksys launch its new EA9200 AC-3200 router. And the two routers are a clear signal of intent from Linksys that it wants a piece of the high-end consumer networking pie. In terms of outright performance, the E8350 is king because its maximum data transfer rate on the 5GHz band is 1733Mbps - the EA9200 has to 'make do' with 1300Mbps.

Inside, the Linksys E8350 is powered by a 1.4GHz dual-core Qualcomm IPQ8064 processor. And like the ASUS RT-AC87U, the E8350 also makes use of Quantenna’s new QSR1000 chipset on its 5GHz radio enabling support for up to four spatial streams, allowing the E8350 to attain a maximum data transfer rate of 1733Mbps on its 5GHz band. 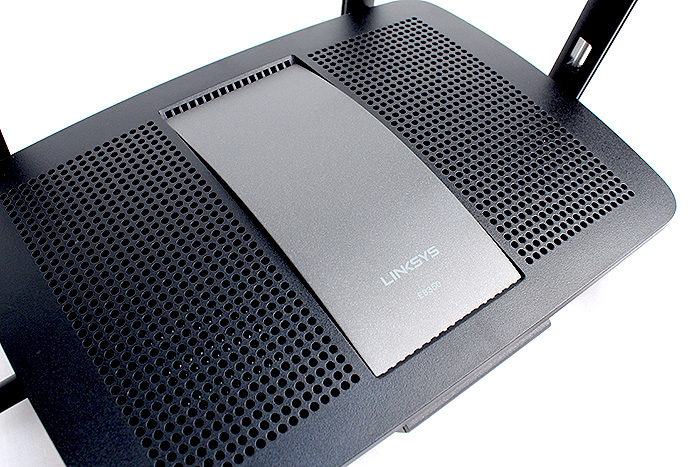 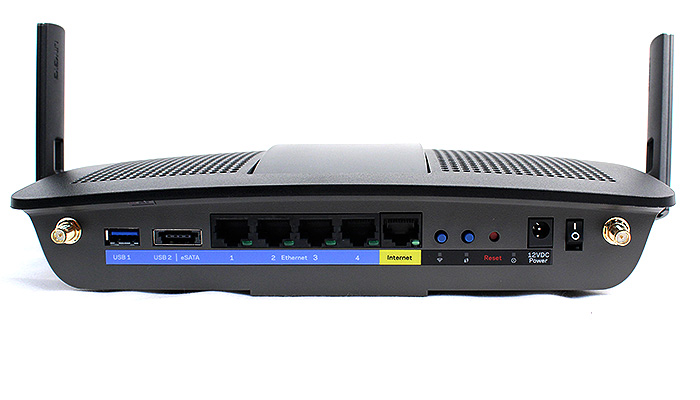 The design of the Linksys E8350 can be described as simple, if a little dull, especially when compared to the ASUS RT-AC87U. On the flip side, it is considerably more compact and does not look out of place even if users should decide to mount it on walls. It has four antennas that broadcasts four individual streams and the antennas are moderately sized. All in all, the E8350 has a more reserved look when compared to the RT-AC87U. In terms of connectivity options, the Linksys E8350 offers the usual suspects of a single Gigabit WAN port, four Gigabit Ethernet LAN ports, a USB 3.0 port, an eSATA and USB 2.0 combo port. 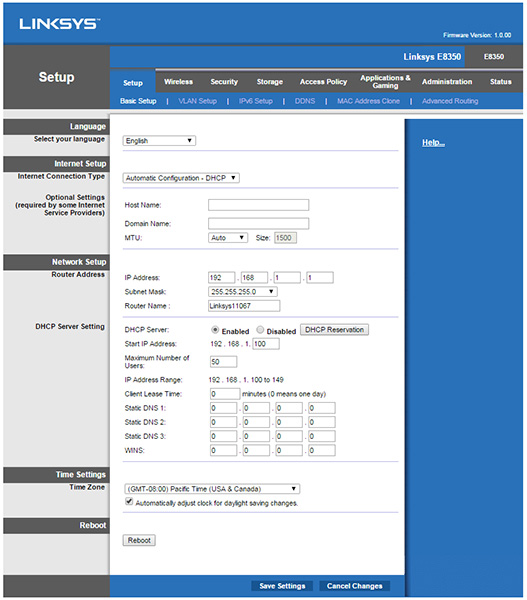 Apart from using your browser to access the Linksys E8350’s setup menu, less savvy users can also opt to install the Linksys Connect utility to help configure the router. The E8350’s setup menu is pretty nondescript and standard fare, and since it is not one of Linksys’ "Smart Wi-Fi" router, this means that E8350 does not come with some features that are more commonly found on other high-end routers such as cloud storage functionality, dynamic QoS, bandwidth monitor and automatic firmware updating. On the flip side, navigation is straightforward and users should have no trouble setting up the router, and it does have other features such as port fowarding, DMZ and media server functionality, which should serve the needs of more basic and less fussy users well.