A Case of the DDR3-2133 Memory Kits Shootout

Upgrading the system memory capacity of your PC is usually a case of determining the total required capacity based on the kind of applications you run (especially concurrently), figure out the preferred memory configuration, order the respective memory modules or upgrade kit(s) and plonk those sticks into the DIMM slots of PC’s motherboard. It's not often that we need to make a case for memory modules for higher clock frequencies if mainstream DDR3 (Double Data Rate Type three) memory kits rated at DDR3-1333 do the job reasonably well (and more so if they are low latency parts).

However, with the launch of new processors from Intel and AMD, with their corresponding hardware platforms that feature support for higher-rated memory modules, the justification for speedier memory is sound. For example, the server-grade Sandy Bridge-E processor, which was launched in early 2012, is compatible with DDR3-1600 memory modules in quad-channel configuration. 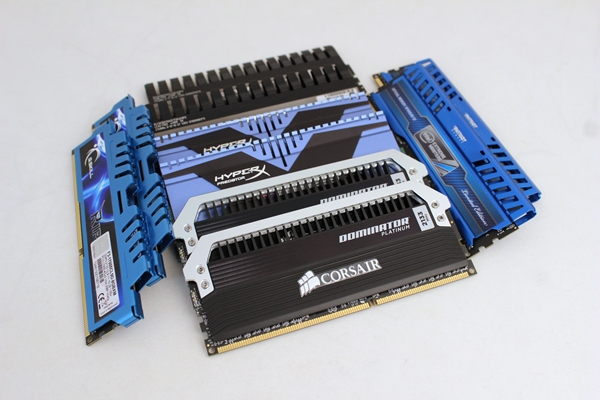 The Case for Higher Clock Rates

With the advent of integrated graphics engine cores on both Intel and AMD processors, there is a need for these graphics cores to be fed data from the system memory at a speedier rate in order for them to realize their true potential. The integrated graphics processors on the current generation of Intel Core CPUs as well as AMD’s Trinity Accelerated Processing Units (APU) have demonstrated their ability to scale accordingly to system memory data rates. Such hardware development drives the need for higher-end memory modules for mainstream user hoping to get the best out of their system.

Not forgetting overclockers and power users, such memory modules will offer them another avenue to push their rigs to higher performance levels by increasing the base clock frequencies of their motherboards. Generally, the DRAM frequency is obtained by multiplying the base clock frequency with the system's memory multiplier; hence, as an overclocker attempts to increase the base clock in an attempt to fine tune his overclocked rig, the extra headroom provided by the higher clock rates of these memory modules will come in handy. At the time of writing, we understand that there are already DDR3-2800 memory modules on the market that are sure to satisfy even the most ardent overclockers on the scene.

A Short Refresher on Latency Timings

However due to latency timings, two memory modules with the same theoretical maximum transfer rate can achieve different performance levels. When both modules are operating at the same clock rate, i.e., DDR3-2133, their memory timings will make a difference. This is because memory timings define how fast certain internal memory operations can take place and are measured in clock cycles. For example, one of the prominent parameters called CAS Latency (or CL for short) indicates the number of clock cycles the memory module will take before returning data requested by the processor. A CL-9 memory module will have a delay interval of nine clock cycles to deliver a requested data, whereas a memory module with a CAS Latency 7 will complete the same task in just seven clock cycles. While both modules may run at the same clock rate of DDR3-2133, the second memory module will be faster, as it would have delivered data sooner.

From our experience, and based on current RAM prices, we would recommend 8GB of DDR3-2133 matched pair kits as a starting point for those venturing into the realms of overclocking but don't really have heavy computing requirements. The higher rated frequency of these memory modules are compatible with both the latest Intel and AMD platforms and aren't over-the-top in requirements that may drastically reduce compatibility with processors and motherboards.

These kits have two memory modules, each of 4GB capacity, that are ideal for anyone who is building a mainstream desktop system or a HTPC for the den. Those who've higher requirements can easily consider getting an extra kit for double the capacity or opt for a higher density kit to conserve DIMM slot usage for future upgrading needs. Furthermore, despite the increase in the rated operating frequency than the official platform specs, all the memory module kits that we've gathered in this shootout managed to stick to the Intel-recommended 1.65V standard. We rounded up five such pairs from Crucial, Corsair, G.Skill, Kingston and Patriot Memory to put them through their paces and we'll detail them on the following page.