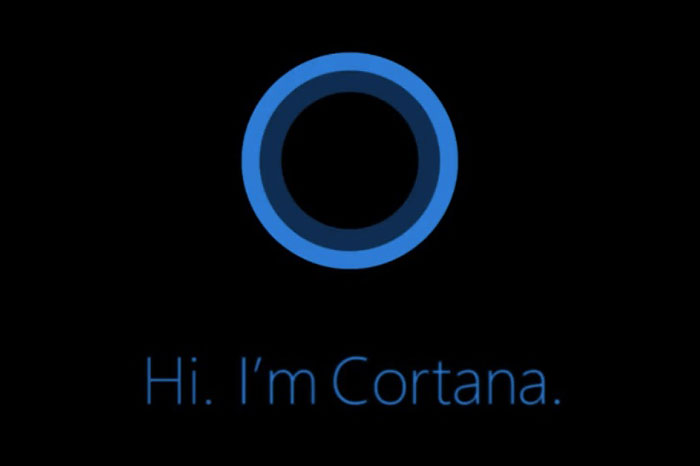 Windows 8.1 isn’t the only one getting some love from Microsoft on the first day of the Build 2014 developer conference. The ‘mobile first, cloud first’ company has also taken the opportunity to unveil the next edition of its Windows Phone 8 mobile operating system: Windows Phone 8.1 (codenamed ‘Blue’).

So what’s new in Windows Phone 8.1? There are literally hundreds of new features (remember Windows Phone 7.5?), but here’s our top eight.

Widely known by its ‘Cortana’ codename before this, the final name of Windows Phone 8.1’s digital personal assistant is…still Cortana, which is brilliant. (Background: Cortana is the name of the AI character in the Halo video game series, which is owned by Microsoft. And Cortana in Windows Phone 8.1 is also voiced by the same actress, Jen Taylor.) Powered by the vast knowledge vault that is Bing (and other data sources, of course), and the speech recognition capabilities of TellMe, it’s an intelligent personal assistant in the same vein of Apple’s Siri and Google’s Google Now. It’s activated by either a Live Tile on the Start screen or by a press on the Search button.

Through interaction and your permission to have your data (which happens the very first moment you use it), Cortana’s usefulness will become more and more obvious with each passing day. As Microsoft puts it: “She detects and monitors the stuff you care about, looks out for you throughout the day, and helps filter out the noise so you can focus on what matters to you.” And what Cortana knows about you is stored in a virtual ‘Notebook’ that’s stored in the cloud, one you can easily revoke access to. You can input text or just speak to communicate with Cortana. In short, Cortana is a digital personal assistant that tries to act like a real human being. It's extensibility (there are APIs, so third-party app integration is possible) also sets it apart from Siri.

But there’s a slight crease to Cortana’s skirt: When it’s launched (as a beta) in Windows Phone 8.1 this year, only a few regions will get it. They are: the U.S., the U.K., and China. For us in Asia Pacific, we’ll have to wait till 2015.

(To know about Cortana, we recommend that you check out this blog post from Microsoft or this detailed piece by The Verge.) 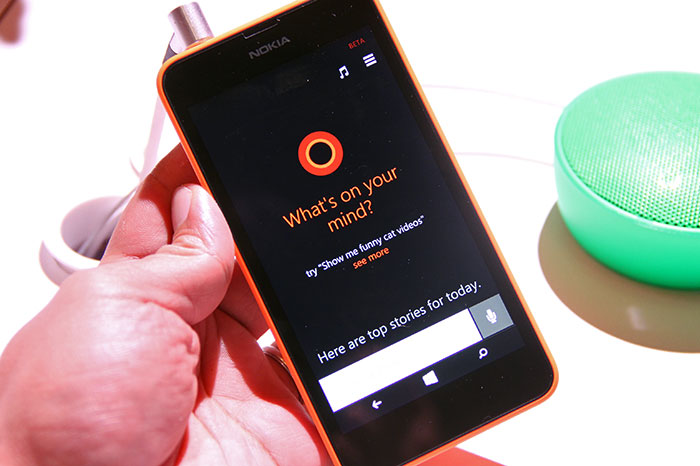 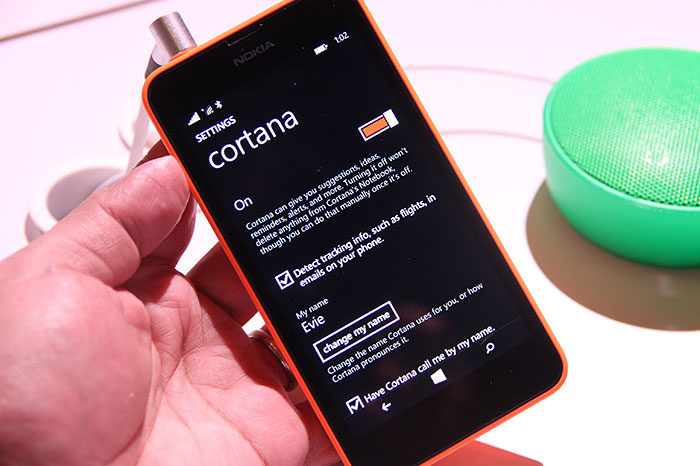 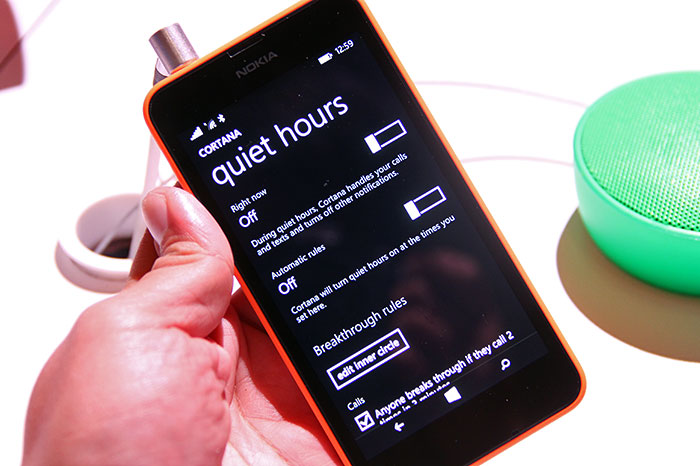 Another big feature is Action Center, which is a swipe-down-from-the-top panel that houses notifications for apps and settings (yes, something like Android’s notification shade and iOS’ Notification Center). Notifications can be silently added updated, and deleted in Action Center, and they’re viewable even when the phone is locked. Above the collection of toast and app notifications is a bar with four user-configurable ‘quick actions’ (i.e., shortcuts) for easy turning on and off of system settings like Wi-Fi, Bluetooth, Camera, Flight Mode, Internet Sharing, Location, Rotation Lock, and more.

As they say, it’s better late than never. 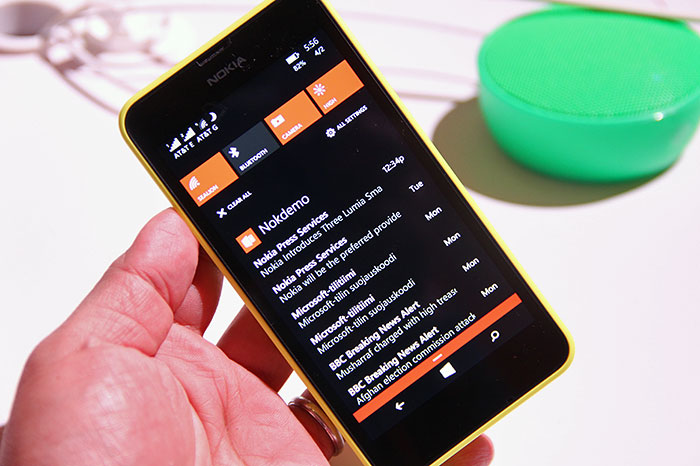 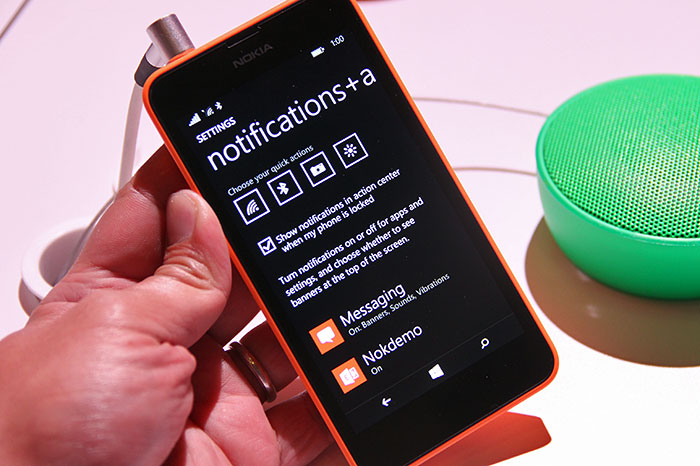 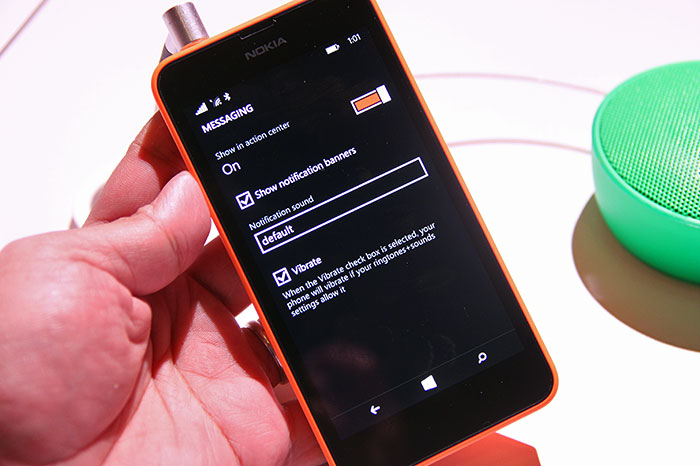 We don’t know about you, but the new built-in swipe-based keyboard in Windows Phone 8.1 is a major productivity feature in our opinion. Similar to the Google Keyboard, or the Swype/SwiftKey third-party virtual keyboards on Android, this stock keyboard lets you enter a word by sliding your finger from one letter to the next, complete with a prediction system that suggests alternative words (emoticons too!) to speed up typing. Microsoft even claims that a ‘kid’ was able to break the world record for fastest typing previously held by the Swype keyboard on the Galaxy S4 using the Word Flow Keyboard (Update: Video below!).

For once, Windows Phone has one-upped both Android and iOS. 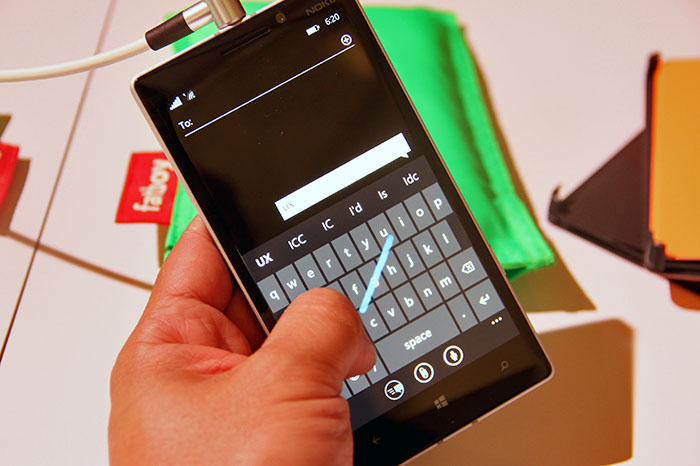 The Modern design language places a lot of emphasis on readability, achieved through large text and minimizing UI chrome and graphics. While you can ‘dress up’ the Start screen on Windows Phone 8 with Live Tiles and select from a pre-determined set of accent hues, the lack of wallpaper customization does make it look boring after a while.

With Windows Phone 8.1, you can now use a photo for the Start screen background. But since there’s significantly less space in between tiles and around them on the phone (unlike the desktop), it doesn’t make sense to put an image underneath all the tiles (else, the tiles would simply obscure the image). The implementation on Windows Phone 8.1 is actually very clever: by toggling the transparency of the tiles, the image appears in them, with the end result resembling somewhat like a mosaic. And as you scroll, there’s a pretty cool parallax effect, where it looks like the background image is also moving.

Also, Windows Phone 8.1 now enables three columns of tiles for all screen sizes. Previously, only screens 5 inches or larger can do that. 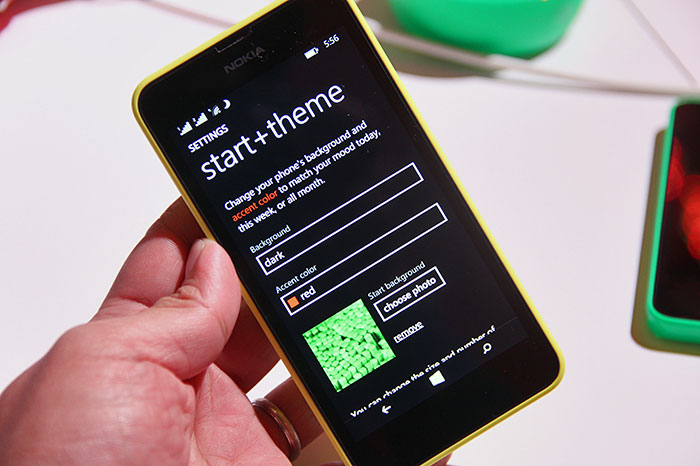 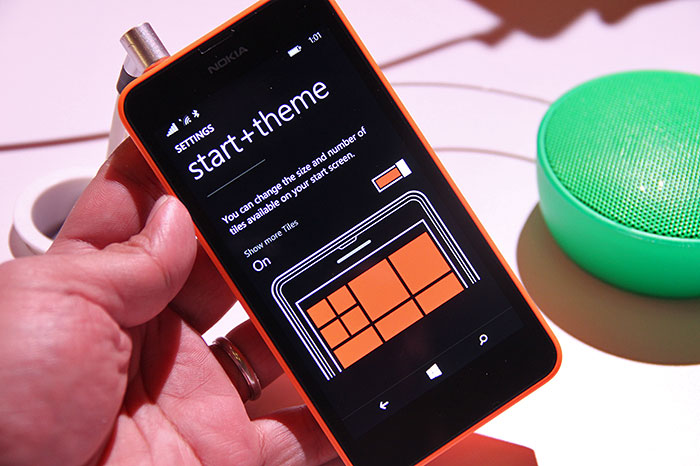 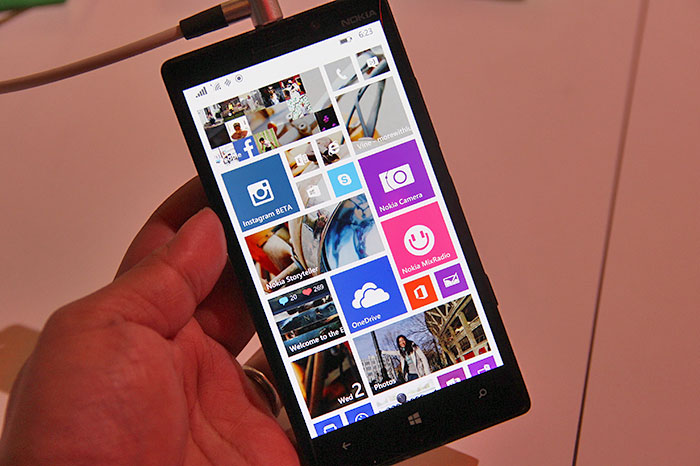 At long last, VPN support is coming to Windows Phone. While this is often viewed as an enterprise feature, we bet that this will also make a lot of consumers (who subscribe to a VPN service to get region-specific content, like Netflix) very happy. Many protocols are supported, and it’s possible to define when a VPN connection is automatically triggered, if it’s not already connected.

Of course, VPN support isn’t the only new enterprise feature in an update as huge as Windows Phone 8.1. There’s also S/MIME (Secure/Multipurpose Internet Mail Extensions) support for encryption and signing of emails, enhanced MDM (Mobile Device Management) policies, support for the EAP-TLS (EAP-Transport Layer Security) standard, and password-protected document support for Office, among others. For more details on enterprise features in Windows Phone 8.1, check out this blog post from Microsoft. 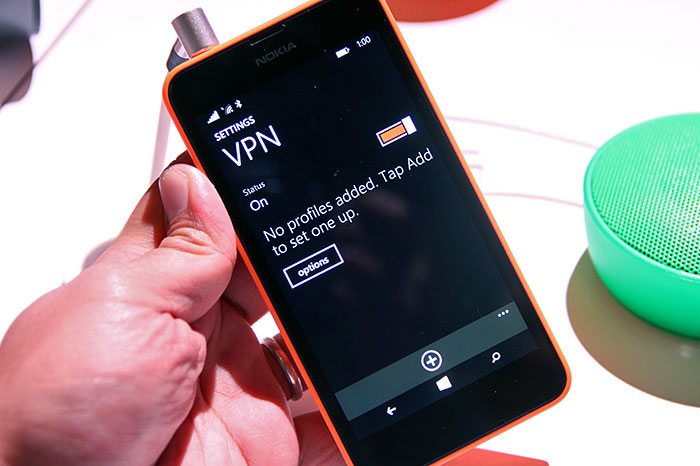 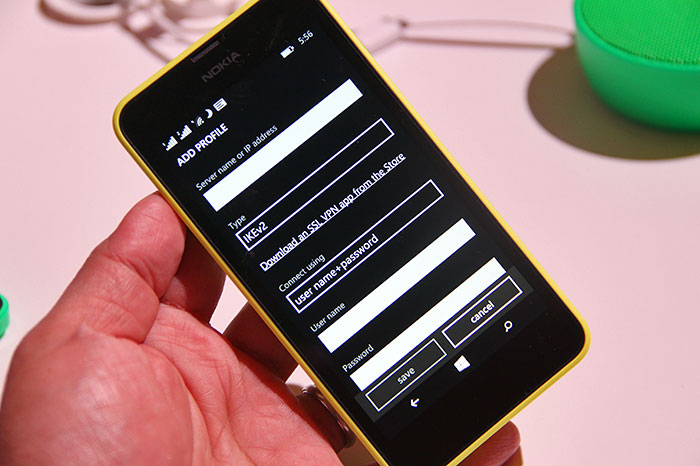 Windows Phone 8.1 also brings an overhauled Windows Phone Store, which unsurprisingly draws design inspiration from the Store on Windows 8.1. In a nutshell, most of the layout changes are made to improve app discoverability (e.g. quick links to featured, top, and trending apps sections) and to help users make better informed decisions (e.g. the ability to sort reviews, app suggestions based on location). We also like the higher info density, because we (and we believe many others, too) like to skim through catalogs, so showing more things at once is preferred.

The option to allow apps to update automatically is also present on Windows Phone 8.1 (don’t worry, you can set it to happen only when there’s a Wi-Fi connection). For phones with an SD card, it’s now possible to store app and game data on it. And speaking of SD card, besides apps, you can now store music, photos, and movies on it. Hooray! 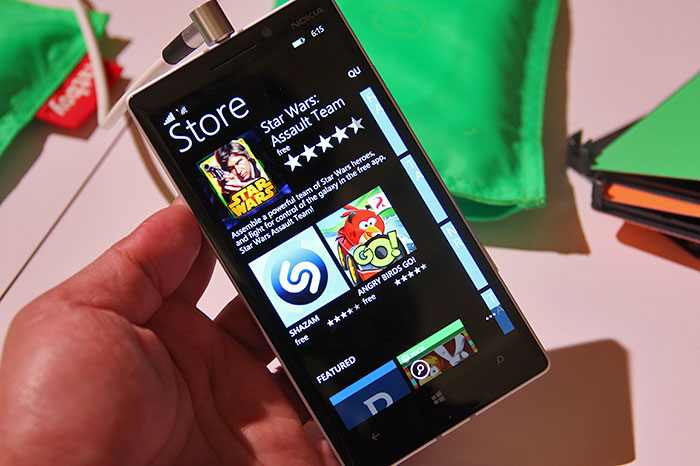 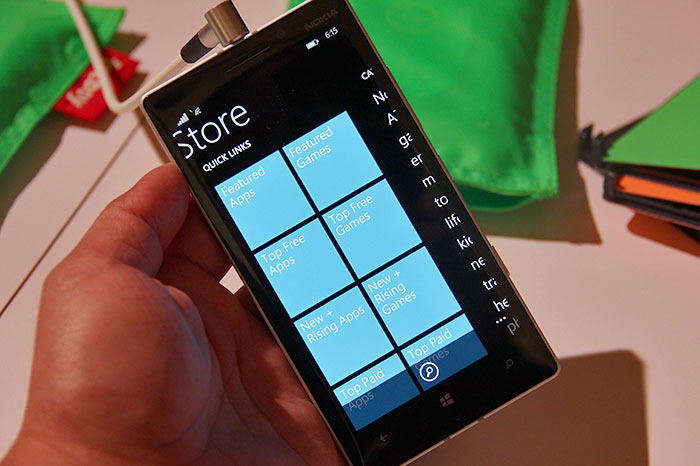 When Windows 8.1 was released last year, Internet Explorer 11 was a major new feature. The mobile version has now made its way to Windows Phone 8.1, and as you may have expected from the version number, it sports many features we first saw on its desktop counterpart, such as support for password saving, Reading View mode (that strips out ads and reformats the text for easier reading), and WebGL (including a new HTML5 video UI for inline video playback). There’s also inPrivate Browsing (whereby the phone doesn’t keep data, such as cookies, temporary Internet files, history, of your browsing session), removal of the silly 6-tab limit, as well as syncing of tabs across devices (finally!). 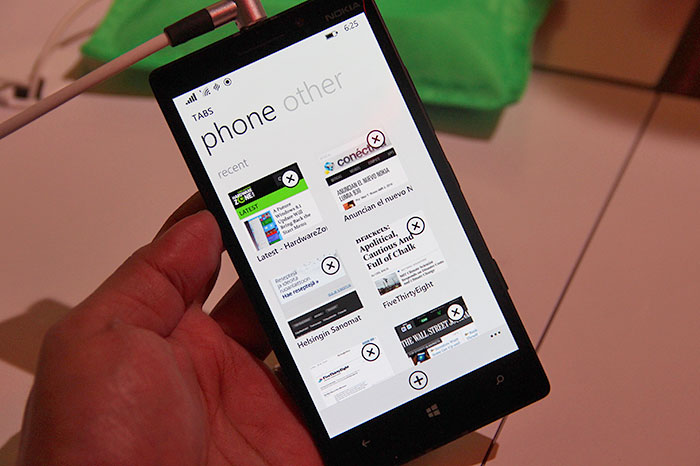 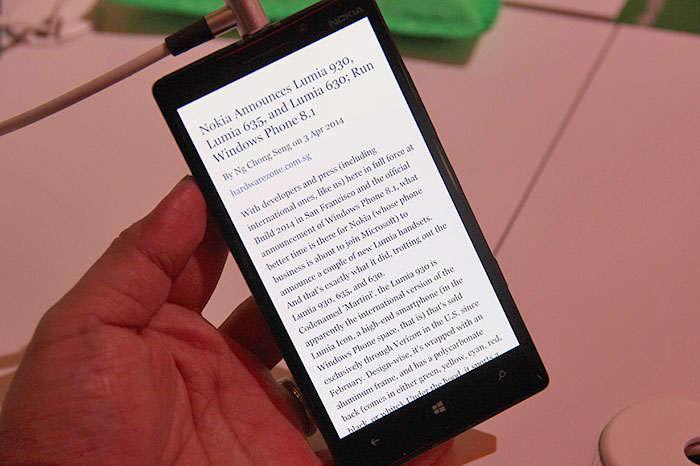 There are many other great features in Windows Phone 8.1, like Wi-Fi Sense, the themable lockscreen, the new Skype app (that’s integrated with the dialer and works with Cortana), the updated Calendar app (that now gains a new week view and panning right to get to the next day, week, or month), and the new Photos UI, among others - but we chose Windows Phone 8.1’s support for Qualcomm’s Snapdragon 200, 400, and 400 LTE chips and dual SIM cards to roundup this article because we believe these (and the free Windows scheme for devices with screens smaller than 9 inches) will enable OEMs/ODMs to bring even more affordable (and yet high-quality) smartphones to the market. This can only be good news for consumers, especially cost-conscious ones in markets like Asia, Africa, India, Middle East, and Latin America.

Nokia’s Lumia 630 and 635 are prime examples. Powered by a quad-core Snapdragon 400 processor clocked at 1.2GHz and sporting a 4.5-inch IPS LCD display, the single-SIM, 3G-only version of the 630 is going for just US$159. If you need dual-SIM support, the Lumia 630 Dual Sim (yes, that’s the name) costs only US$10 more. And for US$189, you can get the Lumia 635 that supports 4G LTE for faster cellular data connections. The Lumia 520 is the best-selling Windows Phone handset; the Lumia 630 is likely to follow its footsteps. 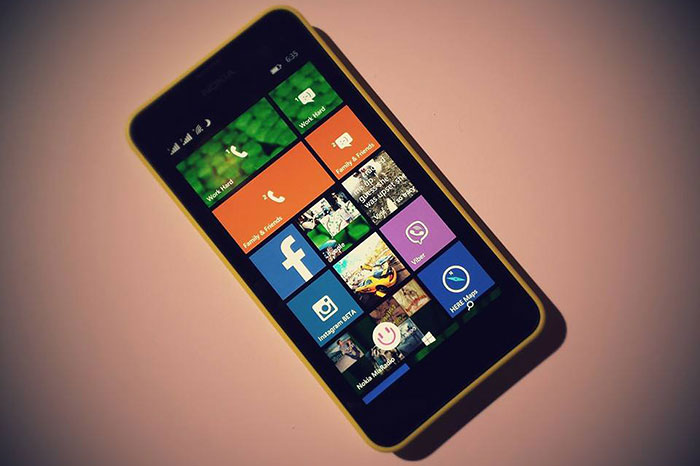