The 8 coolest and most important new gadgets from IFA 2015

The 8 coolest and most important new gadgets from IFA 2015

The Internaionale Funkausstellung is Europe's biggest tech show and it takes place every year in the capital city of Germany, Berlin. Brands from around the world show up every year and take the opportunity to showcase their latest and greatest products, and 2015 was no different. There were tons of new gadgets and devices being showcased and introduced, and here are some of the highlights of the show. But if you are really strapped for time, here are the eight coolest and must-know gadgets from this year's show. 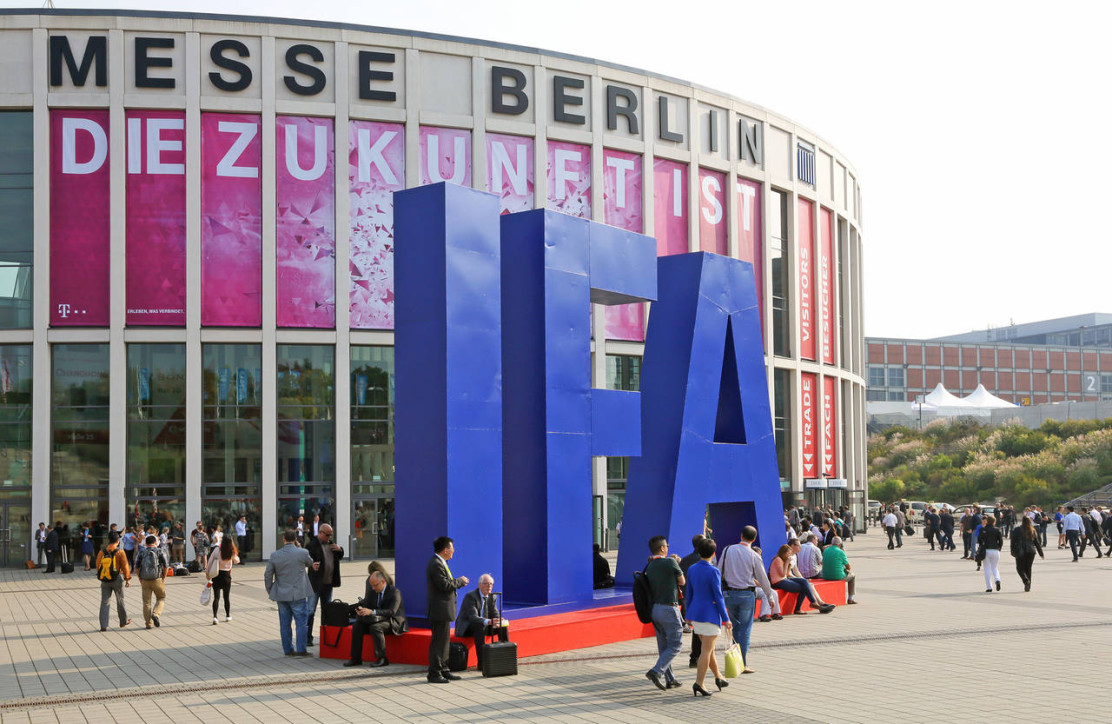 Not keen to let perennial rivals Apple have all the smartwatch limelight, Samsung took the chance at IFA 2015 to launch their latest and possibly greatest ever smartwatch, the new Gear S2.

The new Gear S2 is a far cry from Samsung’s previous, clunky smartwatches. It is a sleek, round smartwatch with a 1.2-inch AMOLED display, a stainless steel case and a ceramic bezel. That bezel is the best thing about the watch. It’s the way you interact with it, rotating left or right with a light click, letting you navigate from app to app, or scrolling up and down when you're inside an app itself. Once you've scrolled to the app you want, you just tap the screen. It’s such a simple and intuitive design for a watch, it’s amazing no-one has thought of it before. We should know, because we were there in person to see it.

Like most of Samsung's recent smartwatches, the Gear S2 runs on Tizen OS, however, it will be compatible with any Android smartphone running Android 4.4 or later, with at least 1.5GB RAM. To find out more about this new watch, head over here to our hands-on article. While camera manufacturers duke out over sensor sizes and megapixels counts, router manufacturers are trying to outdo each other with more external antennas. And the router that is currently sitting on the throne of antennas is the new RT-AC5300 Wireless-AC5300 tri-band router from ASUS. It has eight antennas. Soak that in for a while. The eight antennas aside, it also has a body that looks more like a spaceship. Taken as a whole, the new RT-AC5300 router does look like some piece of weird alien technology.

However, what the RT-AC5300 router really is is a tri-band router that supports a maximum combined data transfer rate of 5300Mbps. How is this number derived? Thanks to Broadcom’s new NitroQAM technology, total throughput on the single 2.4GHz band is now 1000Mbps, whereas each 5GHz band can support up to 2167Mbps. Add it all up and you get 5334Mbps. 4K is the latest buzzword insofar as displays are concerned and Sony decided to squeeze a 4K display with a resolution of 3,840 x 2,160 pixels into their 5.5-inch flagship-level smartphone. Topping it off is a premium chrome finish that’s reflective enough to be a mirror, and a power button that doubles as a fingerprint sensor. It does seem intimidating to the naked eye and to our wallets, even if a 4K screen in your pocket is not practical – yet. If the Z5 Premium too over-the-top for your taste, Sony also has the Z5 and Z5 Compact – with 5.2 Full HD and 4.6 HD screens respectively. Just like the Xperia Z smartphones that precede this lineup, the Z5 devices promise waterproofing capabilities and powerful camerawork with brand new large 1/2.3-inch Exmor RSTM for mobile sensor with 23-megapixel resolution and f/2.0 G Lens. The new second generation Moto 360 watch will come in three sizes and can be customized with a variety of case materials, bezels, finishing and watch bands. There will be 46mm case that was designed specifically for men and two 42mm cases for men and women. The men’s version of the 42mm case will feature 20mm wide lugs, whereas the ladies version will have smaller 16mm wide lugs. All models will have displays protected by Gorilla Glass 3 and all models will also be roughly 11.4mm thick, so it should fit comfortably under shirt cuffs.

Underneath, the new Moto 360 will be powered a quad-core Qualcomm Snapdragon 400 processor with an Adreno 305 GPU and 512MB of RAM. It will also have 4GB of internal storage. A sports model, called the Moto 360 Sport will be available later this year. That model will have built-in GPS functionality for tracking runs. A cult favorite makes a return with the 2015 edition of the classic Razer Diamondback. First released back in 2004 – yes, it has been over 10 years! – the Diamondback has been nigh impossible to find for quite a number of years now. So imagine our excitement when we learned that Razer was resurrecting the mouse, complete with innards updated for 2015. It now features a 16,000 DPI 5G laser sensor, and because Razer is on a mission to ensure you have color-coordinated hardware in all colors of the rainbow, the side rails and scroll wheel now come with Chroma lighting. It retains its long, slim ambidextrous form factor, with two programmable side buttons on both sides of the mouse. Rubber grips have also been added to the sides, which mean a better grip and less build-up of dirt and grime. For many content and TV makers, the next big thing after 4K is HDR (high dynamic range). At IFA 2015, Samsung and Sony have committed to bring HDR support to all their 2015 4K LCD models through upcoming firmware updates. But HDR will truly shine on OLED TVs, as OLED technology has the capability to render the required HDR light range better than LCD. LG's EF9500 and EG9200 are the company's first 4K OLED TVs to support HDR right out of the box. These TVs are able to render HDR content from streaming services (e.g. Amazon Prime Video) as well as external sources (e.g. UHD Blu-ray players). The only non-LG 4K HDR-enabled OLED TV on the horizon is Panasonic's CZ950. It’s not often that we see something completely new and bonkers, so imagine our excitement when ASUS’ new ROG GX700 notebook rolled up at IFA 2015. ASUS’ ROG line is all about the absolute cutting-edge of technology and the new ROG GX700 lives up its name because it is the world’s first liquid-cooled notebook.

The liquid-cooling module is detachable, so you do not need it to work. And when detached, the ROG GX700 becomes a somewhat portable 17-inch gaming notebook. However, hardcore gamers would certainly want that liquid-cooling module because ASUS claims that it can boost performance by as much as 80%.

Other details that we know now is the 17-inch display will support 4K resolution and that the machine is powered by a high-end Intel Core i7-6820HK (Skylake) processor and a new yet to be announced mobile GPU by NVIDIA that features 2,048 compute cores. By comparison, the current flagship mobile GPU from NVIDIA, the GeForce GTX 980M, has 1,536 cores. Looks like the ROG GX700 will be an absolute beast. Huawei beat Apple to the punch by announcing their 5.5-inch smartphone with Smart-pressure Sensitive Screen before Apple did with their latest iPhone 6s' 3D Touch. This means that the Huawei Mate S is the only other smartphone out there with a pressure-sensitive touchscreen that delivers different functions with different taps and presses. You can experience it's fairly intuitive Emotion UI 3.1 – effectively a re-skin of the Android 5.1 OS (Lollipop) - via their Full HD (1,920 x 1,080 pixels) AMOLED screen. It also comes with Fingerprint Sense 2.0, which is twice the speed of the previous version, and the Knuckle Sense 2.0, which is effectively smartphone control via gestures and drawing on the phone. 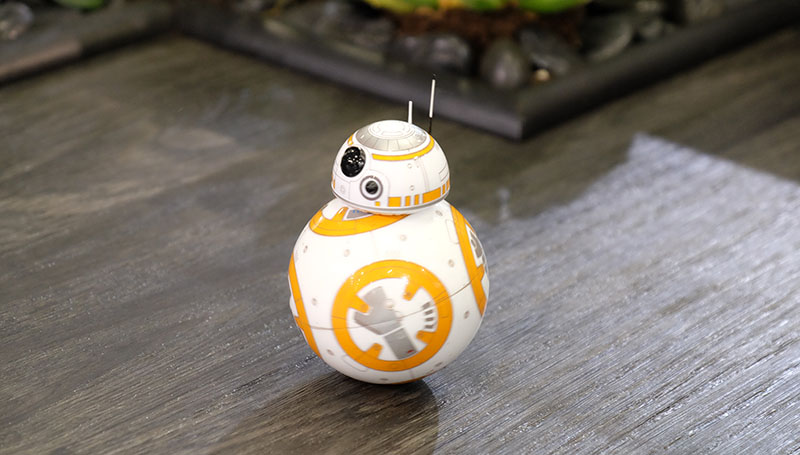 Star Wars fans, here’s something to tie you over till the December 17 release of Episode VII: The Force Awakens. First spotted in Disney’s first trailer for The Force Awakens, BB-8 is a rotund, rolling droid that resembles that other fan favorite droid with a dome-shaped head – R2-D2. The Sphero BB-8 is a miniaturized version of the adorable ball-shaped droid, and it’s more than just a prop. At its core is the Sphero robot ball, a self-balancing ball driven by an internal gyroscope. Without going into the details, the head interfaces with the body with the help of magnets, and it’s designed such that the droid always knows which way is forward. The droid can even recognize and respond to your voice, and you can control it remotely via a smartphone app or even program a route for it! It’s also capable of autonomous behavior, so you can explore the universe together with a ball-shaped buddy. How can fans of Star Wars resist this cute little droid?