At this year's 3rd annual BlackBerry Developers Conference, held from 27-30 September in San Francisco, Research in Motion (RIM) has expanded on some of the key announcements made in last year's conference. If you recall, last year, RIM announced its location-aware API, advertising service, in-app carrier-billing payment services, integration with Adobe, OpenGL ES for games, Theme Builder and Push integration into BB functions after launching BlackBerry App World on 1 April 2009 and the Bold 9700.

As promised, here's a video summary of the General Keynote Session at the BlackBerry Developers Conference: 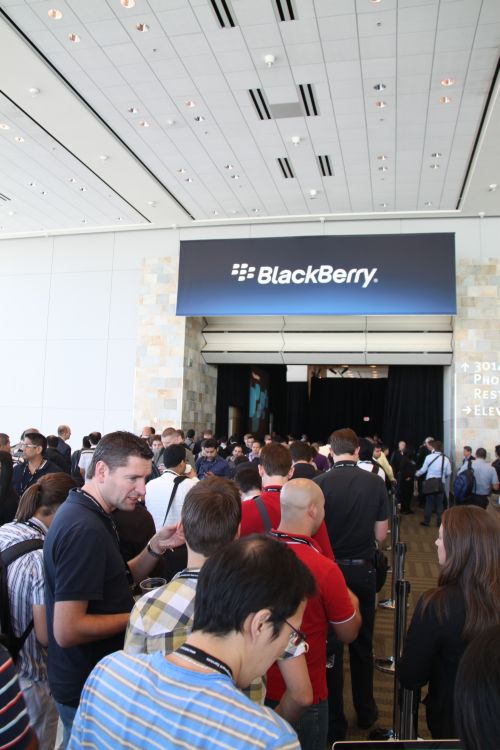 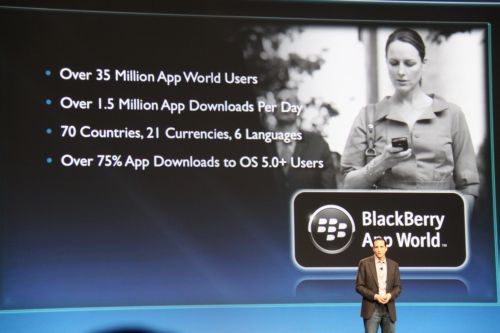 This year, shortly after announcing new smartphones like the Curve 3G and touch-screen keyboard slider Torch 9800, and a touchscreen-friendlier BlackBerry OS 6, RIM is now going back to what they are primarily known for -- their BB Messenger and enterprise level integration (analytics and location-aware functionality). Besides that, they're expanding on their commercialization services and taking their Widgets & Services platform announced from last year into a fully expanded HTML5, CSS and JavaScript-friendly WebWorks developers platform.

Oh did we also mention that there's a tablet called the BlackBerry PlayBook?

A 7-inch PlayBook that Works with Your BlackBerry Smartphone

The PlayBook is a 7-inch 1024 x 600 WSVGA touch-screen tablet with a BlackBerry Tablet OS. It has a 1GHz dual-core processor and dual HD cameras (3-Megapixel in front, and 5-Megapixel in the rear), supporting1080p HD video recording. 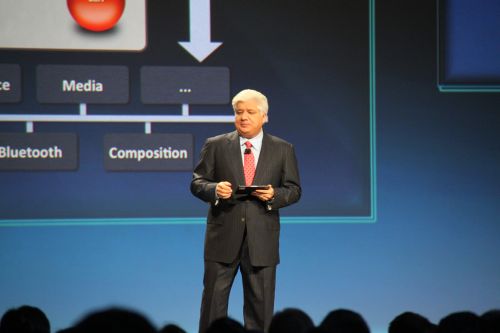 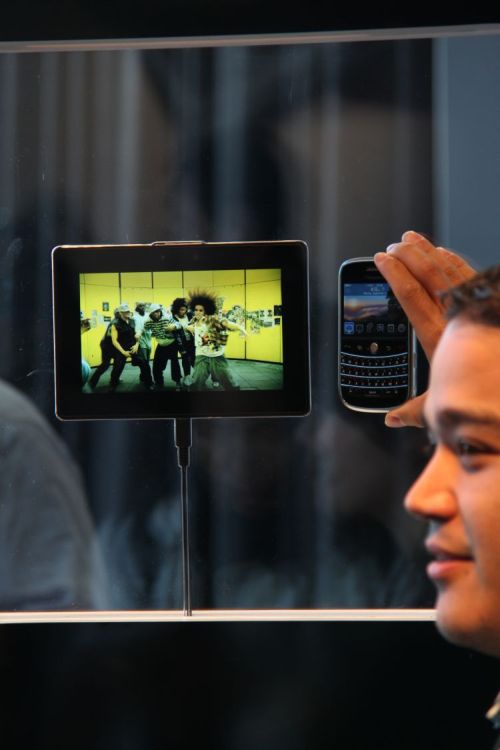 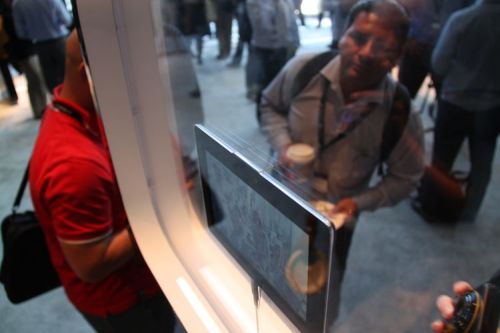 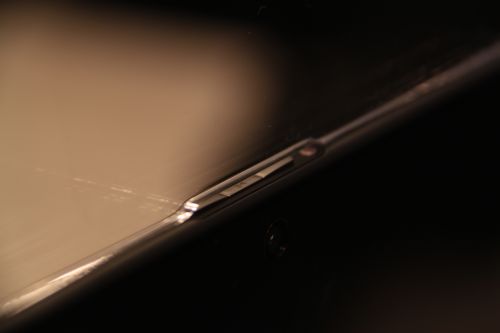 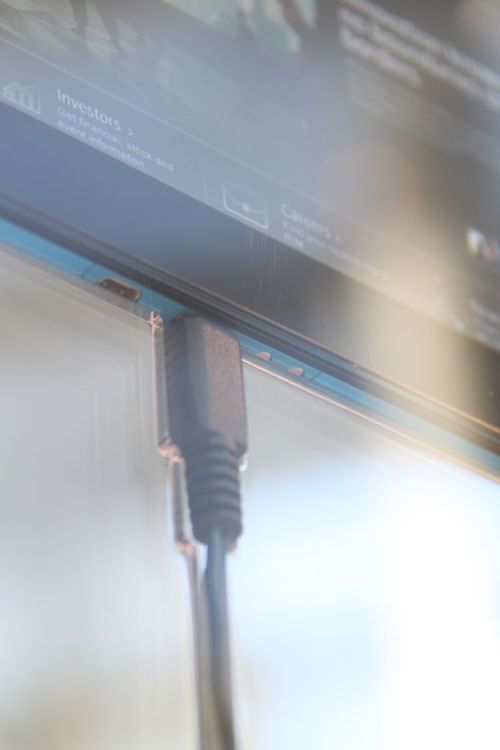 In summary, the PlayBook's specs are: 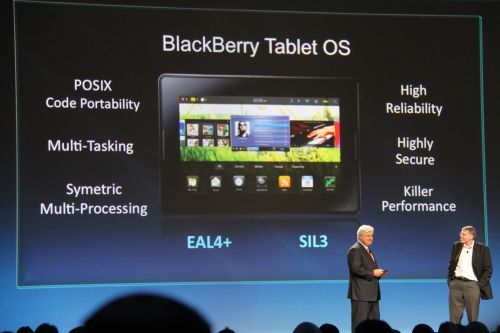 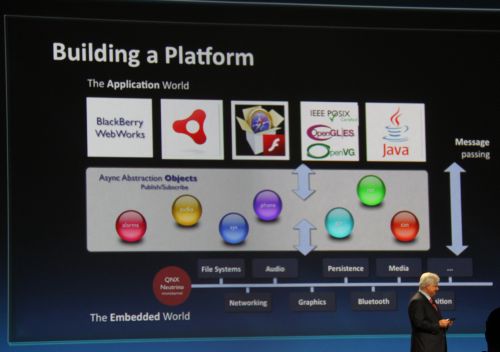 The PlayBook BlackBerry Tablet OS is based on the QNX Neutrino microkernel architecture, used to support many mission-critical apps in enterprise level fields like planes, automobiles, medical equipment and largest core routers. Also, from the specs, it's mighty clear that the PlayBook doesn't support 3G (RIM says that's being planned though). To enjoy BlackBerry services like Push services, calendar and BBM, the PlayBook can be paired with a BlackBerry device via Bluetooth. So the PlayBook actually caches information from the smartphone and lets you view and interact with your services via a larger screen. This is part of a security initiative to ensure no data is duplicated on multiple devices, a major concern among enterprises.

While there is no pricing information at the moment, expect the PlayBook in North America by early 2011 via retail and other channels, and internationally by Q2 of next year.

For example, a poker card game developer can allow a BB user to invite other BB users on his BBM to play the game and chat with them through the BBM platform in-game. 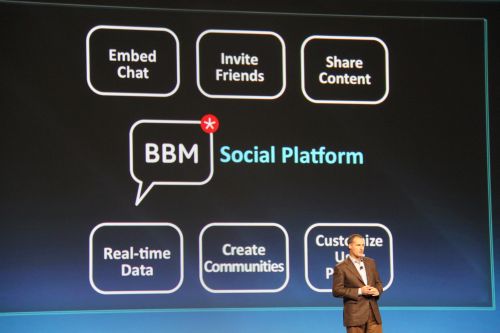 Besides that, developers can also create apps that allow functions normally native to just the BBM app itself, such as updating the BBM status profile, friend grouping, invitations to BBM and data transfer among BBM users within the app itself.

At the keynote, features like embed chat appears on an app like Telmap and ScoreMobile, while apps like Kik Music and Magmic THK let users share content and real-time data, as well as create communities using their BBM channels. Other apps like Word Mole, Magmic THK and ScoreMobile allow users to customize their user profiles. 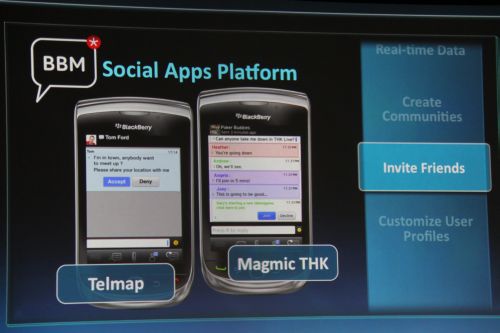 The platform is expected to be available in the Spring of 2011.

Besides BBM Social Platform, RIM has also expanded on the various commercialization services it unveiled at last year's Developers Conference. These include the In-App Advertising Service, carrier billing payment service and analytics.

The Advertising Service has made it easier for developers to embed advertising into their apps with just three lines of code. Besides the SDK, there's a mediation platform and the support of several ad networks, ranging from Amobee, Jumptap, Lat49, MillenialMedia and Mojiva. It is expected that other ad channel networks like Medialets, Buzzcity, Navteq, Placecast, Sympathico and others will likely join the service as well. 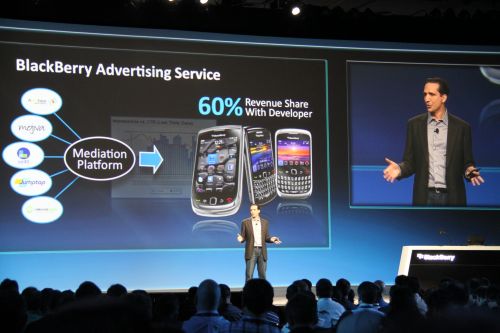 RIM has made a commitment to encourage more developers to come on-board by granting 60% of revenue earned from every downloaded app to developers. In fact, for a limited time, RIM is making registration and app upload to the BlackBerry App World free-of-charge for developers. 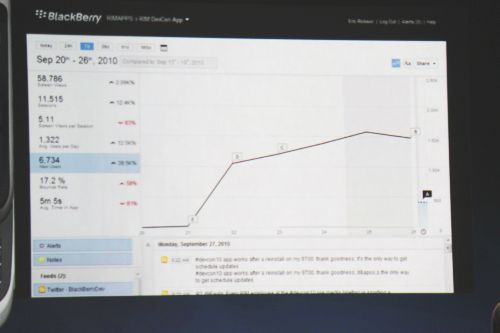 Developers can soon integrate analytics into their apps. The Analytics Service is a collaboration between RIM and WebTrends, and will allow developers the opportunity to track frequency, loyalty, the screens being accessed, features used and so on, with just a few lines of code in the app.

The good part is that the service will be freely available to developers by early 2011.

Finally, RIM has also unveiled WebWorks, an app development platform that simplifies the use of HTML5 with BlackBerry Push services, multi-tasking and so on. Basically, developers can now create full-featured apps on HTML5, CSS and JavaScript and leverage on all of BlackBerry's integrated feature-sets and push-related, or location-aware functionality. 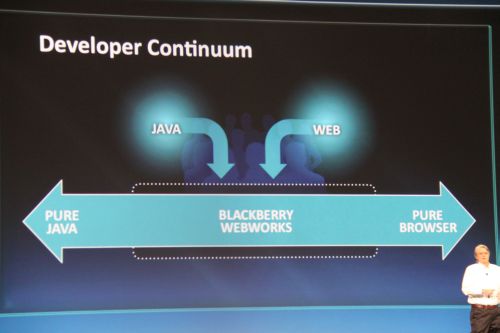 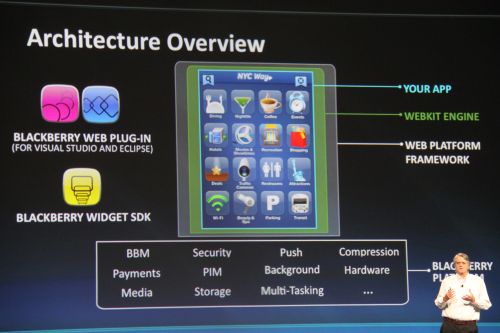 What's even better is that RIM is going open source and giving developers access and contribute to the BlackBerry open web application platform. RIM will be working with open source JavaScript framework companies like Sencha, GitHub, DoJo, JQuery and Nitobi.