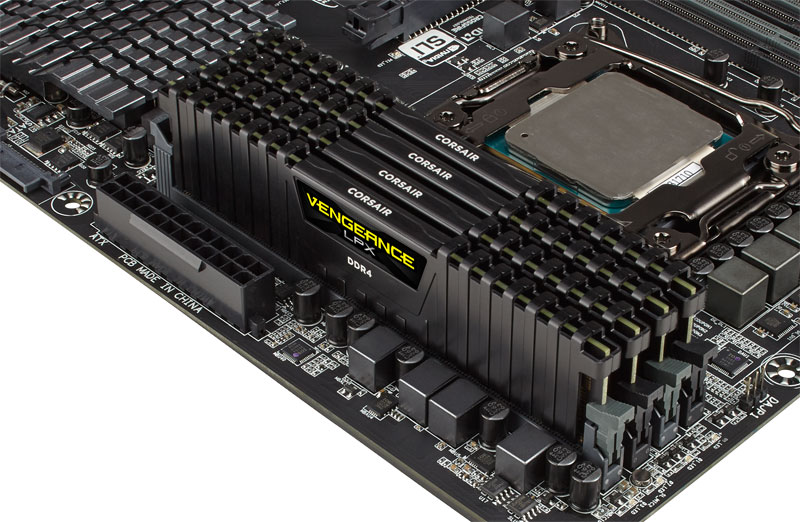 Now that we’ve had a preliminary look at Intel’s new Z170 chipset through an entirely new slate of motherboards from manufacturers, it’s time to examine another key component of your potential new build – RAM. This is especially significant for Z170 and Skylake, because DDR4 memory support is finally coming to something that isn’t the ultra-enthusiast Intel X99 chipset.

Furthermore, Intel Z170 motherboards will no longer support DDR3 RAM. Instead, they’ll support either DDR4 or DDR3L, depending on the motherboard. Because the slots are different for each memory type, your board will only support one of them.

What this means for you, the consumer, is that you’re going to have to get some new DDR4 RAM if you have your eye on a Skylake build. So while you could reuse your LGA 1150 CPU cooler, graphics card, and even storage drive, the DDR3 memory sticks from your old system are not going to be compatible.

But before we dive into some worthy options for your consideration, here’s a brief look at just what benefits DDR4 will bring to your new system:

These advantages aside, do note that DDR4 has slightly higher CAS latency than DDR3 because of the higher memory frequencies. CAS latency is a measure of the time – or more precisely the number of clock cycles – taken by the memory to send data back to the processor when it receives a command. On the other hand, memory frequencies indicate how quickly the system can access data on the RAM. So while it might seem like higher CAS latencies would mean that DDR4 is slower, the outcome isn't always so straightforward because the two work together to influence memory performance.

Memory performance is determined more accurately by the actual latency time, or time to initiate a read, which is measured in nanoseconds (ns). Faster memory clock speeds result in shorter clock cycles between when the memory receives a command and when it actually responds, so even though the CAS latency goes up – more cycles – the actual latency time is only marginally increased, resulting in overall comparable performance. In fact, the higher clock speeds also enable faster transfers and higher bandwidth.

Finally, DDR4 memory also costs quite a bit more than DDR3. Before Intel's Z170 chipset, there wasn't much demand for DDR4 memory because it was only used on the ultra-enthusiast X99 platform. Production supplies are still quite limited, thus prices remain high. However, once Intel's new chipset ushers DDR4 memory into the mainstream,prices will eventually fall as demand, and consequently supply, picks up. In fact, Intel believes that DDR4 memory will achieve price parity with DDR3 memory by the middle of next year.

For the sake of consistency, we’ll be looking at just 8GB (2x4GB) kits, although most of the kits here are also available in larger capacities if you’re of the persuasion that you can never have too much RAM. 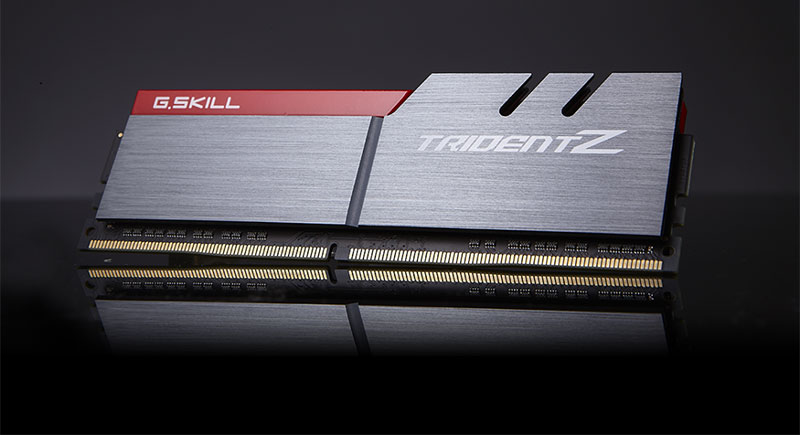 Compared to its Ripjaws V series of memory products, G.Skill’s Trident Z memory kits are considered a more premium product, consisting of kits with frequencies up to 4000MHz. This 3600MHz kit runs at timings of 17-18-18-38 and has an operating voltage of 1.35V.

At 44mm in height, these are not the lowest profile memory modules around, so that’s something you’ll want to consider if you are using a large CPU cooler.

G.Skill has used a single-piece design that allows direct heat dissipation from the heatspreader to the cooling fin, an important feature given the very high frequencies of these modules.

The heatspreaders sport a silver-gray brushed metallic finish, and a couple of notches toward one end help convey a suitably elegant yet sophisticated touch to the modules. If you’re particular about aesthetics, we think the red-and-gray color scheme will go especially well with ASUS’ Z170 ROG and MSI’s Gaming series of boards.

Compared to the 3000MHz G.Skill Trident Z kit, the less aggressive frequencies on this kit from Kingston’s Hyper X division allows for lower latencies and better timings, and it runs at 15-17-17 at 1.2V out of the box.

In addition, it supports a convenient automatic overclocking feature, which enables the memory to boot up at its rated speed – in this case 2666MHz – after installation. Kingston says that there’s no need to enter the BIOS to manually increase it over the default clock.

They also sport a lower profile than the Trident Z sticks to accommodate larger CPU coolers, measuring just 34mm in height. The all-black heatspreaders are adorned with only the Fury and DDR4 branding in white text, alongside a slate-gray HyperX logo. As far as performance-oriented memory modules go, these are fairly plain and should go well with the look of most motherboards. 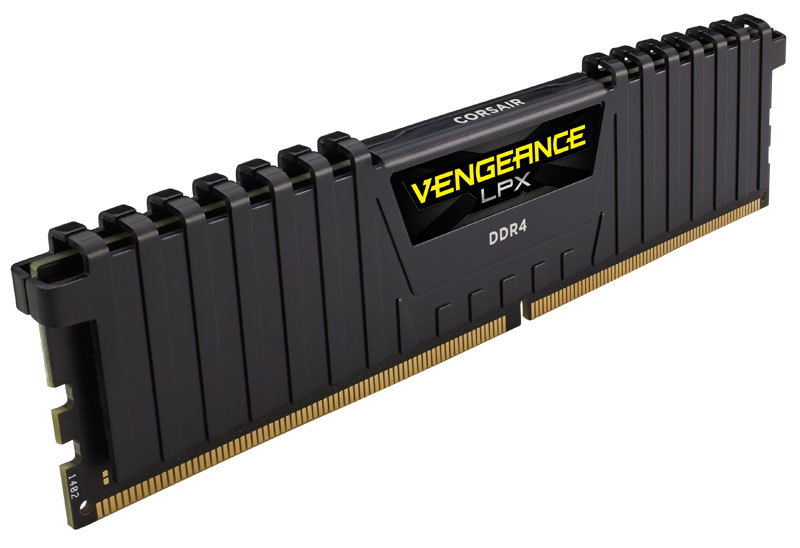 This is another low-profile memory kit (it is just 31mm tall), this time from Corsair. According to Corsair, the Vengeance LPX 8GB (2x4B) 2400MHz kit is designed to be overclocked. The heatspreader is therefore made of pure anodized aluminium for quicker heat dissipation as heat output can increase considerably at higher frequencies. There’s also an eight-layer PCB to further help manage heat and provide improved overclocking headroom.

The modules run at timings of 14-16-16-31 and an operating voltage of 1.2V. Unlike the other kits in this roundup, they’re also available in different colors – black, red and blue – so you can pick the one that best suits your system.

These sticks from Crucial sit between the Ballistix Elite and Sport product line-ups, so they’re a good compromise between price and raw performance. The gunmetal gray heatspreaders are one of the more aggressive designs here, and we can’t help but feel that they belong on a motherboard with a similarly military-esque design. The ASUS Z170 Sabertooth Mark I comes to mind, as do other boards with chunky VRM heatsinks, like the ASRock Z170 Gaming K6+.

It runs at 16-17-17 and an operating voltage of 1.2V as well, and the heatspreaders have been designed for maximum heat dissipation. 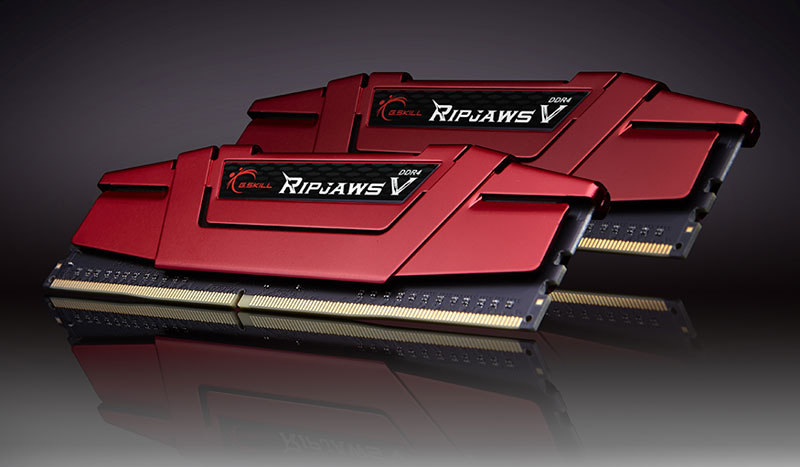 Finally, we’ve decided to include another kit from G.Skill, this time from its Ripjaws V series. G.Skill’s excellent mix of value and performance has consistently made it a popular brand, and we would be remiss if we didn’t pay due attention to its mainstream line-up of DDR4 memory for Intel Z170 and Skylake.

At 42mm in height, you’ll also want to make sure that your CPU cooler doesn’t get in its way. It runs at timings of 15-15-15-35 and the default speed of 2133MHz, so if you aren’t the overclocking type and want a relatively safe and stable kit, this is for you.