You can soon hide your online status on WhatsApp
Tech Guides 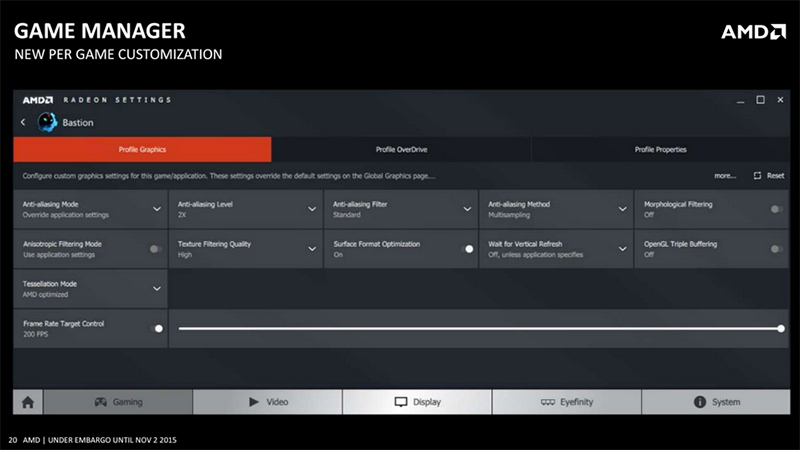 AMD has also worked to bring about significant user experience improvements with a more responsive and intuitive user interface. Compared to the older Catalyst software suite, Radeon Software Crimson Edition can start up under 0.6 seconds, versus an average of 8 seconds for Catalyst. In addition, AMD has made the display initialization time about 3x quicker, which means that you should find that the new Radeon Settings interface – which replaces the Catalyst Control Center – responds to your clicks and commands more quickly because the monitor is now displaying the image faster.

However, the most notable change is probably the completely revamped user interface, which has been built from the ground up with Qt, a software development framework that supports cross-platform work.

But other than additions like Game Manager and a user interface that is easier to navigate, the improvements extend to how users experience their games overall. The improvements take place across the board, encompassing areas including virtual reality, gaming, display, and video.

Crimson is the first publically available driver to enable all of Liquid VR’s features, including affinity multi-GPU, which makes use of multiple GPUs to render each eye in a VR headset in parallel. Then there’s the use of asynchronous shaders on GCN-based graphics cards, which in a nutshell, enables parallel computing workloads, brings about lower latency, and a consequently more responsive VR experience. 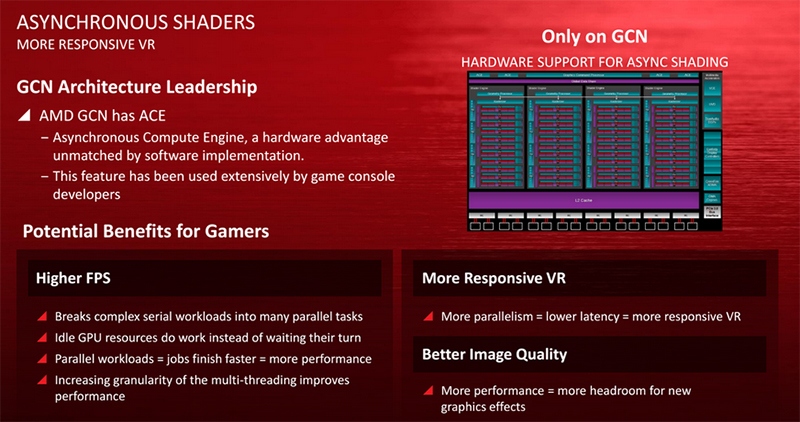 On top of that, Liquid VR also includes technologies for implementing efficient time warping (generating intermediate frames in low framerate scenarios to reduce judder) to further reduce latency, and features a series of OS and driver optimizations that allow VR games to bypass parts of the OS to cut down rendering time.

The immediate consequences of this are small, but the hope is that this will help enable a more seamless adoption of VR as headsets make their way onto the market over the course of the year.

If some of these enhcancements sound familiar, it's because NVIDIA first addressed these concerns and more with the their suite of VR improvement dubbed NVIDIA VR Direct.

More importantly, AMD has worked to address some limitations of FreeSync compared to NVIDIA’s G-Sync, where the former would sometimes display tearing or stuttering when the graphics card fails to push out frame rates above the minimum refresh rate, depending on whether V-Sync was on or not. It has introduced something called low framerate compensation (LFC), which automatically adjusts the GPU’s output and the panel’s refresh rate to provide smoother gameplay when frame rates fall below the minimum refresh rate. 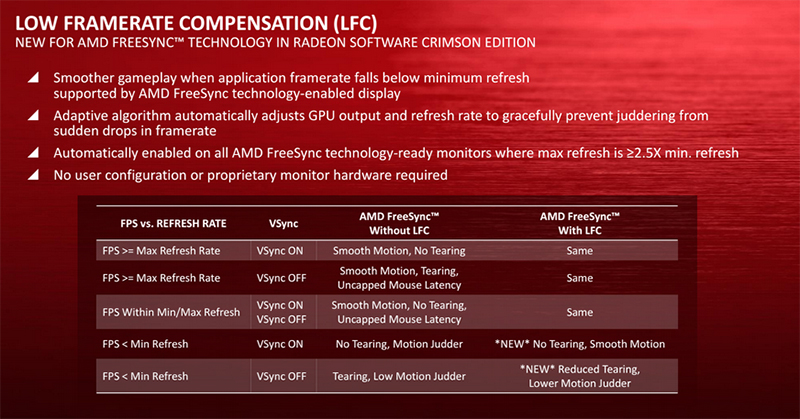 Like NVIDIA, AMD has not disclosed the details behind the “adaptive algorithm” it is using, but it is likely that it is employing some sort of frame repeating to keep gameplay fluid. For instance, if frame rates fall to 25fps, each frame would be repeated twice to feed 50fps to the display. There’s just one caveat – you’ll need a monitor which has a maximum refresh rate that is at least 2.5x greater than the minimum refresh rate to take advantage of LFC. That is, a monitor with a range of 30Hz to 75Hz will work fine, but one with a range of 48Hz to 75Hz will not. The greater range is probably required because AMD needs a large enough refresh range to run at a multiple of the lower framerates.

Moving on, Crimson also now supports frame pacing for DirectX 9, a feature that was previously introduced for DirectX 10 and 11 in Catalyst Omega. Frame pacing does pretty much what its name suggests, ensuring that frames are put out at a steady rate for a more consistent gaming experience. 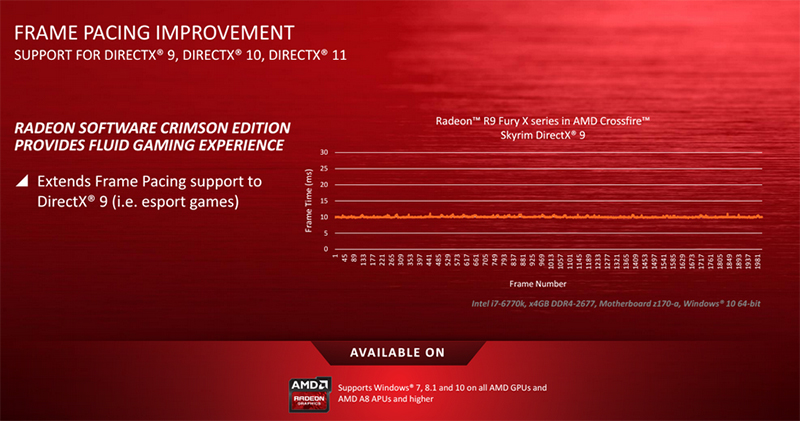 On top of that, users gain greater control over their display settings with the ability to create custom display resolutions and set the timings, refresh rates and pixel clock for their monitor. This finally puts it on par with NVIDIA, which has had the ability to set custom resolutions for years now.

Users can even use virtual super resolution (VSR) to take advantage of Windows 10’s support for higher DPI display panels. This means that VSR now has applications outside of games and can be used to create higher resolution desktops and workspaces for greater productivity. 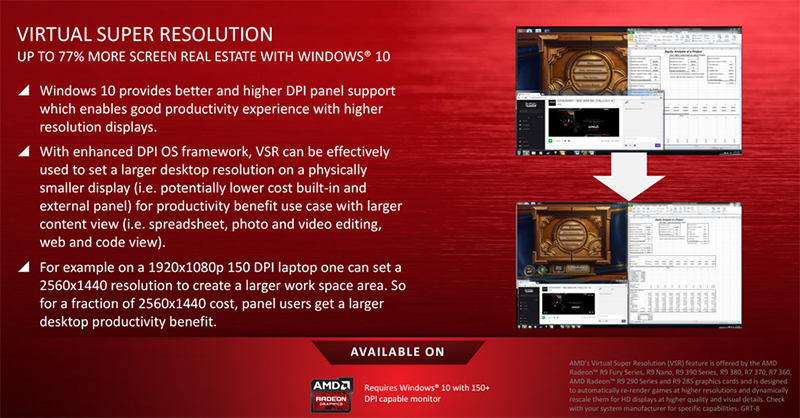 On top of that, Crimson introduces something called directional scaling, which is essentially anti-aliasing for video content. A new adaptive directional filtering algorithm helps improve the scaling of 1080p content to 4K resolutions, reducing the appearance of jagged edges and lines. This is no doubt in response to the trend toward high-resolution displays, and the glaring lack of corresponding high-resolution content. However, this feature is only supported on AMD's Fiji-based GPUs, which includes the Radeon R9 Nano, Fury, and Fury X cards. 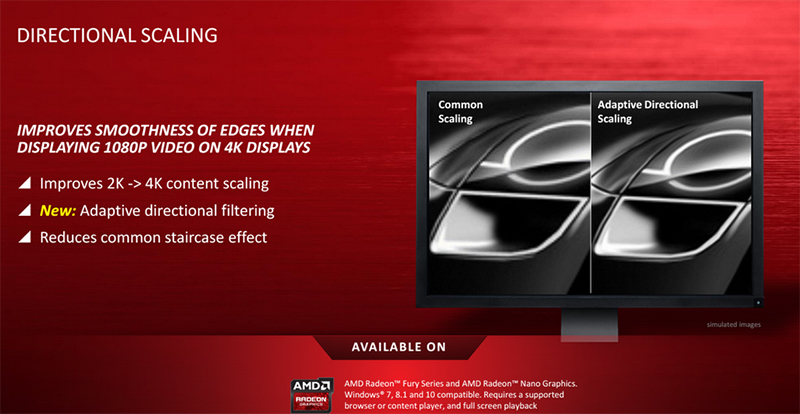 AMD has also updated Crimson's dynamic contrast algorithm. It can now adjust the contrast on a per-video basis for the best experience with individual videos. Because different clips likely have vastly different contrast ratios, the new algorithm's ability to adapt can help to better maintain the contrast between light and dark areas of the scene and preserve detail.