Note: This article was first published on 19th February 2016. All of the drives compared are still the best available from each brand at the time of re-publication.

We have said it many times before, but it bears mentioning it again. If you are still using a mechanical hard disk drive as your primary drive, upgrading to an SSD will net you the biggest performance gains. The reason is because even the slowest SSD will run rings around the fastest 10,000rpm hard disk drives. For proof, check out our review of the Western Digital VelociRaptor drive. Furthermore, SSD prices are at an all-time low, so there really is no reason for anyone to still be dawdling along with a mechanical hard disk drive.

That said, even SSDs todays are hampered by the limiting SATA interface. The current iteration of the SATA interface, known as SATA III or SATA 6Gbps, offers, as its name suggests, 6Gbps of bandwidth. After taking encoding inefficiencies into account, this works out to around 4.8Gbps or 600MB/s. Now if you look at the sequential read and write speeds of SATA-based SSDs, you’ll find that a great number of them top out at these speeds, clearly showing that the interface is the limiting factor. 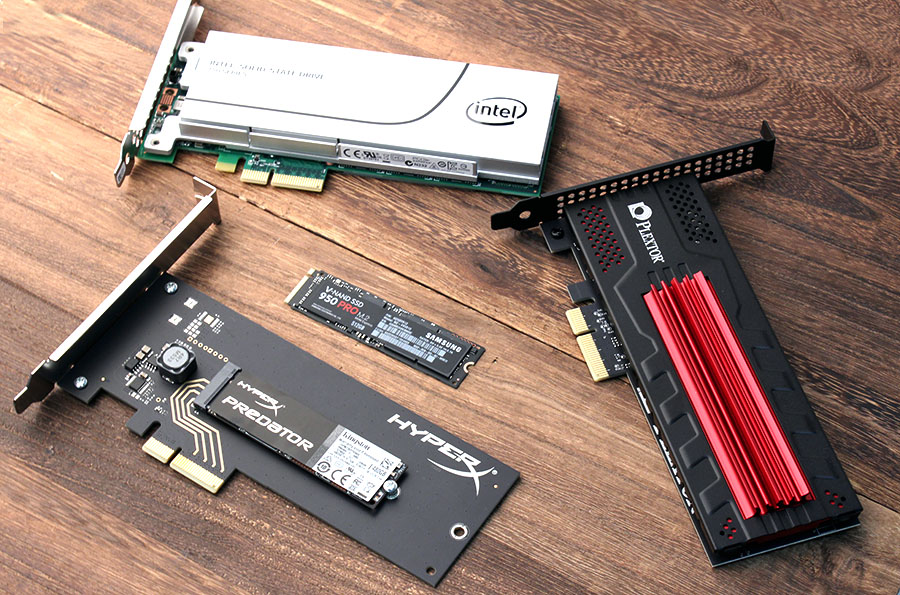 What next then? The answer is obviously the PCIe interface. The PCIe interface, now into its third revision, offers 8 GT/s or roughly 984MB/s of bandwidth per lane. What this means is that the latest consumer PCIe-based SSDs that support PCIe 3.0 x4 would be able to enjoy a maximum bandwidth of a whopping 32GT/s or just about 4GB/s - 6 times greater than that of SATA 6Gbps.

But PCIe aside, the other improvement that’s allowing SSD’s to perform at their maximum potential is the new NVMe protocol. NVMe or Non-Volatile Memory Express was developed expressly for PCIe-based SSDs, and supersedes the old AHCI protocol that was optimized for HDDs, with the goal of improving storage performance. To do so, NVMe allows for more commands per queue and also more queues, to take advantage of the extremely low latency of flash-based storage.

So today, we are going to explore the PCIe-based SSDs that are available right in the market right now. 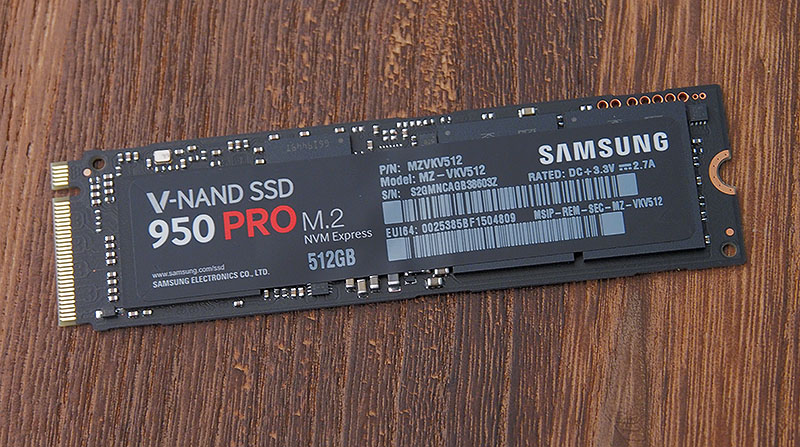 We begin with a familiar figure, the Samsung SSD 950 Pro, the reigning SSD speed king in our labs. We first tested it here and then explored its performance further by unleashing its full potential using a PCIe 3.0 x4 to M.2 adapter.

We urge you to read these two features first to better understand the drive. But the gist is this, the SSD 950 Pro is Samsung’s fastest consumer drive yet. Thanks to the speedy PCIe 3.0 x4 interface, support for the new NVMe protocol that was developed expressly for fast flash drives, and Samsung’s own V-NAND, the SSD 950 Pro racked up the highest performance figures we have ever seen in our history of testing SSDs.

Performance aside, it also comes with a high endurance rating, support for hardware encryption, and Samsung’s easy-to-use Magician software for monitoring and maintaining the drive. Overall, it’s an easy drive to recommend to serious enthusiast because of its blend of performance, endurance, and features. But how would it fare when pitted against other PCIe-based SSDs? Well, that’s what we are here to find out.