Running the New 3DMark on Notebooks

Concluding our review of 3DMark (2013)'s cross-platform benchmark, today we'll be taking a look at the Cloud Gate benchmark, which is designed for integrated graphics processors and mobile discrete GPUs. We'll also be seeing how some of our notebooks fare on Fire Strike and Fire Strike Extreme.

Here's a look at how our machines compare: Fire Strike is designed for enthusiast-level graphics cards and dual-GPU setups and is Futuremark's most ambitious and technical benchmark to date.

It serves as a showcase for DirectX 11 features, utilizing a grueling two-part test with extreme levels of tessellation and volumetric illumination, as well as complex smoke simulation using compute shaders and dynamic particle illumination.

As such, it is not really designed with mobile GPUs in mind, however, we wanted to see how our notebooks fared and how they compared against their desktop equivalents.

The AMD Radeon HD 7970M fared much, much better at Fire Strike and FireStrike Extreme which makes us suspect that its poor score on Cloud Gate is more to do with bad optimization with AMD drivers - we will look into this and update with future driver versions.

In fact, the Radeon HD 7970M was the top performer on Fire Strike, outscoring even the GTX 680M by 3%. This result is actually consistent with the pattern we saw in the desktop graphics cards, where the Radeon HD 7970 GHz Edition managed to outperform NVIDIA's GeForce GTX 680. For modern day games, this benchmark is much more reflective of the notebook and it's graphics subsystem's capabilities.

Moving down the list, the 2-way SLI GTX 650M configuration was again very impressive, outperforming the GTX 670M by about 30% on Fire Strike and by 35% on Fire Strike Extreme. 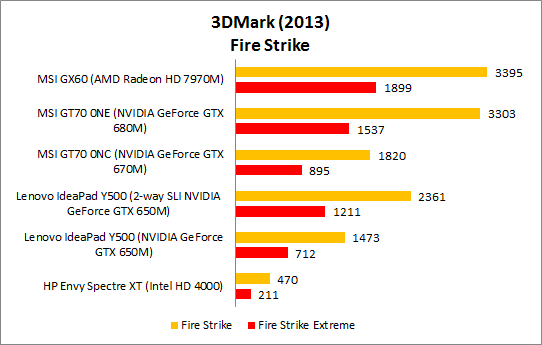 If we compare our mobile GPU results (above graph) to our previous desktop GPU scores (below graph), we can see that mobile GPUs are still quite far behind their desktop counterparts. The highest scoring mobile GPU, AMD's Radeon HD 7970M is only about half as good as its desktop equivalent, and overall is more akin to the mid-range NVIDIA GeForce GTX 660 - which still outperforms it by some 20%. From a technical standpoint, this is accurate because the GPU configuration of the desktop Radeon HD 7970 is quite different from the mobile version. However, from a marketing standpoint, it could be a cause for mismatched expectations, which has probably always been the case. Discrete mobile GPUs are fairly powerful these days and almost all of our notebook units seemed to handle the Cloud Gate benchmark with ease (with the exception of the AMD Radeon HD 7970M - which is likely due to driver issues). Cloud Gate has a number of feature limitations due to its DirectX 10 emulated engine, which makes it somewhat unreliable as a benchmark for modern games as most new releases utilize DirectX 11 engines.

While the benchmark itself looks quite good, it is probably only useful as a representation of older games or easier to run titles such as MMORPGs like World of Warcraft. As such, Cloud Gate is probably best reserved for testing integrated graphics processors or entry-level discrete GPUs such as NVIDIA's GeForce GT 620M.

Fire Strike and Fire Strike Extreme on the other hand, are more representative of modern FPS titles utilizing a number of extremely taxing DirectX 11 features. Our high-end discrete mobile GPUs performed as expected here, scoring roughly equal to a same-generation, mid-range desktop graphics card. As such, we would recommend that gamers with powerful, desktop replacement notebooks skip Cloud Gate and use this benchmark instead.