Decathlon Singapore is going all out on data
Shootouts

Battle of the 27-inch gaming monitors 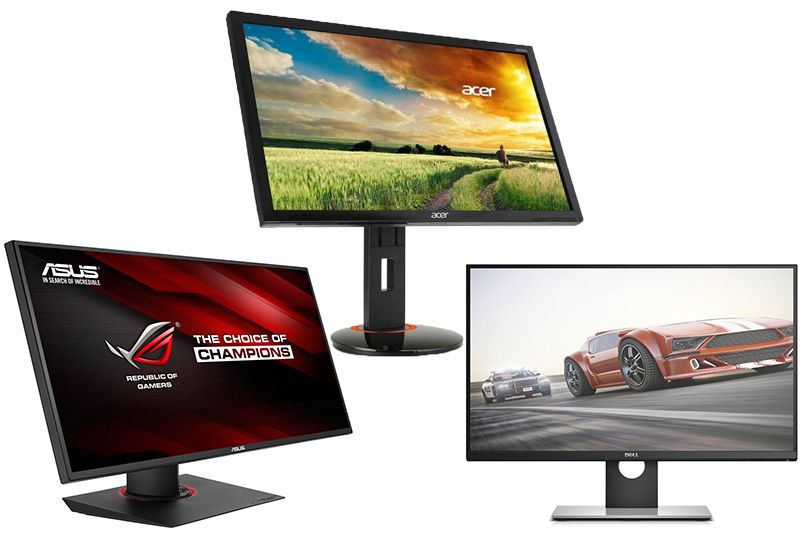 In the past, choosing a gaming monitor was relatively easy.

Due to the advantages TN displays had over IPS panels, it was an easy choice to pick the TN displays over the IPS ones. Sure, the colors weren't as good as those on an IPS display, but the refresh rate and response time advantage made that a worthwhile trade-off.

In recent times though, IPS displays have steadily been getting better.

Where they once had 8ms or higher response times, today's IPS monitors can boast a relatively speedy 4ms response time, almost catching up with the 1 to 2ms response time of some TN displays. With the narrowing response time between both display types, it's getting harder for gamers to pick a good gaming display.

That's where we come in. We've corralled three worthy displays for our gaming monitor shootout. Two have IPS displays, one has a TN panel.

To fit into our criteria for selection, the monitors have to have fast refresh rates, at least 1080p resolution and come with NVIDIA's G-Sync tech built-in. G-Sync synchronizes the refresh rate of the monitor to match those of the GPU's frame draw output. Doing so eliminates screen tearing, while also reducing input lag and stuttering. All this means is that you can have a better experience on an older system, without changing any hardware other than the monitor (and a compatible graphics card).

NVIDIA's G-Sync requires NVIDIA's G-Sync hardware module to be used in the monitor, and the screen will also need to undergo qualifications by the green camp. All this drives up the cost of an NVIDIA G-Sync qualified screen. AMD's FreeSync however doesn't require dedicated hardware to be implemented in the monitors other than adhering to the Displyport 1.2a specs (more specifically, DisplayPort Adaptive Sync, which is based on AMD FreeSync) as adopted by the open VESA standards authority. So as long as monitors are able to engineer their monitors to adhere to these specs, a monitor technically meets the AMD FreeSync standard, without any testing and qualification by a third party. This is the reason why an AMD FreeSync monitor is vastly cheaper than an NVIDIA G-Sync monitor, despite both trying to achieve the same thing - bringing about a synced screen refresh that adjusts in real-time to match the GPU's output capability for a stutter-free and tear-free gaming experience.

As a result, both standards have become a requirement for a monitor to have to be considered a worthy gaming monitor. G-Sync monitors however are far more widespread (at this point in time), which is why all of our finalists are G-Sync qualified monitors.

So without further ado, let's take a look at the contenders.

Now that you've seen a rundown of the contenders, head on to the next page and see how they stack up.