Note: This article was first published on 11th February 2017 and republished as it's still relevant.

The rise of 2-in-1 notebooks

2-in-1 notebooks are becoming increasingly popular with consumers, especially in today’s mobile-centric world. Consumers want mobility and flexibility, and 2-in-1 notebooks provide just that. Today, just about every major notebook manufacturer has a 2-in-1 notebook in their lineup. 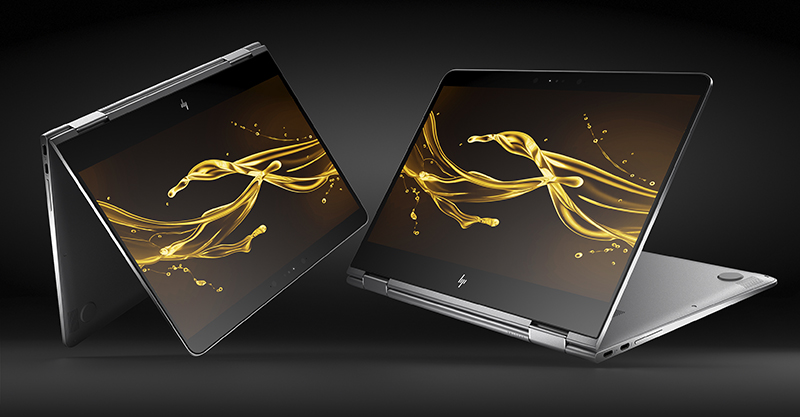 As a rule, convertible notebooks are more convenient, because they are usually larger and have more connectivity options. But because of this, they are usually less portable and more unwieldy when used as a tablet. On the other hand, detachable notebooks tend to function as tablets better, but they usually have lesser ports and can suffer from cooling issues because of their smaller form factor. Both types of notebooks have their pros and cons and it isn’t a simple matter of which one is better than the other. It is very much dependent on individual preferences and usage scenarios.

So in this shootout, we have rounded up four of the newest 2-in-1 notebooks in both convertible and detachable forms and from the biggest names in the business. Read on to find out who will emerge triumphant. 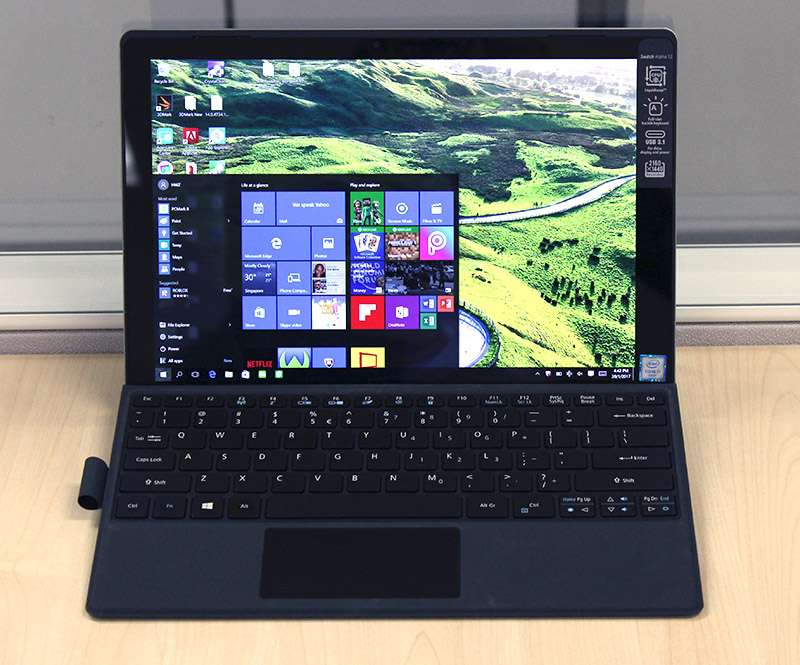 Microsoft’s earlier Surface Pro 3 nailed down the formula for detachable notebooks and Acer’s new Switch Alpha 12 does not deviate far from this winning formula. However, it does have a few tricks up its sleeves to keep it fresh and to distinguish itself from the competition.

Let’s start with the display and design. The Switch Alpha 12 has a 12-inch large IPS touchscreen display that outputs a resolution of 2,160 x 1,440 pixels. It is glossy and that means reflections and glare can be problematic, especially under harsh light sources, but at least it is sharp and colors are sufficiently vivid and vibrant. Behind the display is an integrated kickstand that can adjust for angles of up to 165 degrees. It also has an anti-slip rubber strip, which is helpful. 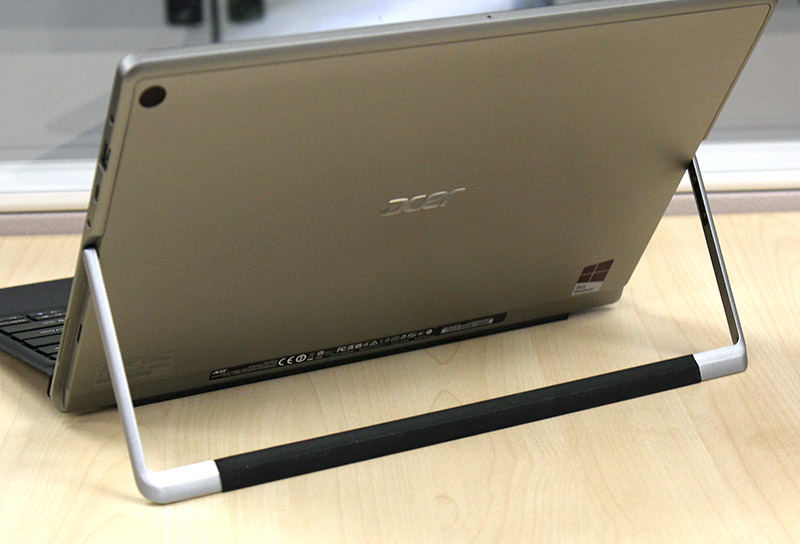 The tablet portion is actually pretty hefty, measuring 11mm thick and weighs around 920g. For comparison, the Surface Pro 4 is 8.5mm thick and just 789g. In the hand, there’s a palpable difference between the two. And once you add the magnetic keyboard dock, the Acer Switch Alpha 12 becomes even bulkier, ballooning to 15mm thick and weighing 1.25kg. But we are nitpicking, because in the grand scheme of things, the Switch Alpha 12 still remains to be a very portable device.

Things get more interesting on the hardware side of things. Inside, the Switch Alpha 12 is powered by a dual-core Intel Core i7-6500U processor (2.5GHz, 4MB L3 cache) and gets 8GB of LPDDR3 RAM and a 512GB SSD. Graphics duties are handled by the integrated Intel HD Graphics 520 integrated GPU. These specifications are decent and more than powerful enough for everyday computing tasks like web browsing, emails, photo editing and even the occasional light video editing. There’s also a less powerful configuration that is equipped with the Intel Core i5-6200U (2.3GHz, 3MB L3 cache) processor. 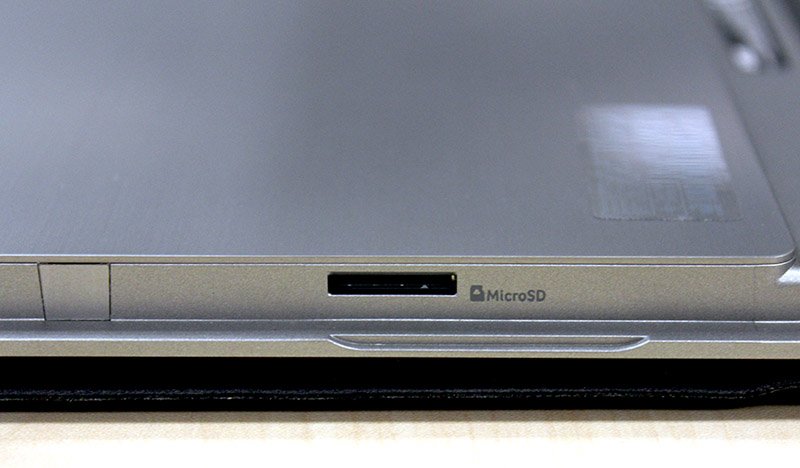 What’s really interesting, however, is that the Switch Alpha 12 employs a liquid-cooling system called Acer LiquidLoop. It is a proprietary closed loop liquid cooling solution that is powered by heat generated by the device when it is in operation. The coolant passes through the loop over the processor, and the gas within the loop expands as it absorbs the heat produced by the chip. This expansion propels the coolant through the circuit, where heat is radiated before it circles back into the CPU. There’s no fan involved and so the Switch Alpha 12 is eerily quiet even when under heavy loads. Not only is it quiet, it runs pretty cool too and the Switch Alpha 12 doesn’t get too hot and never becomes uncomfortable to hold in the hand. 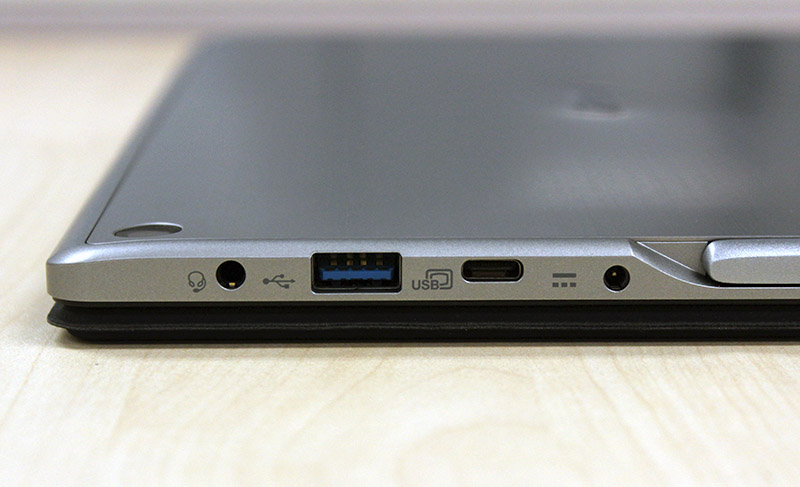 The keyboard and Acer Active Pen comes bundled as standard. The keyboard attaches to the display using magnets and can be laid flat or propped up by attaching to the bottom of the display for a more comfy typing angle. The keys even have backlights and are quite pleasant to use. The trackpad, however, is small and is prone to episodes of unresponsiveness. Good thing the touchscreen doesn’t suffer from the same issues and has accurate and responsive tracking. 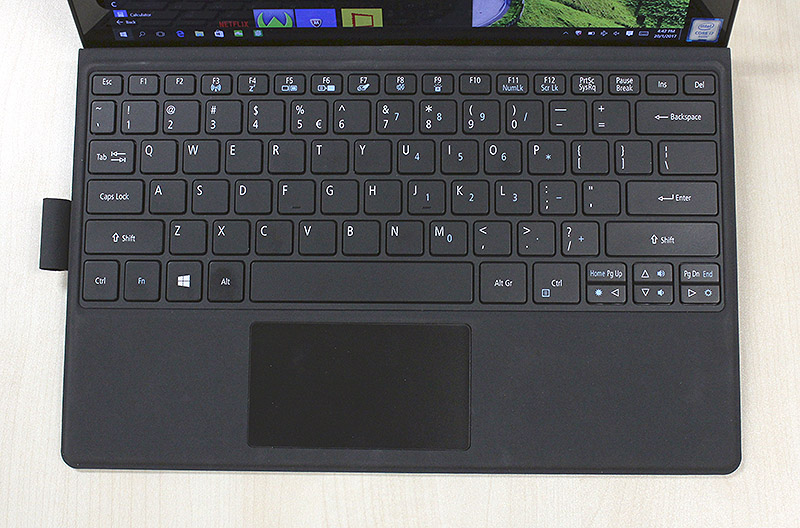 The Acer Active Pen requires a single AAA battery for power and feels quite good in the hand. However, it isn’t quite as sensitive as Microsoft’s and only has 256 levels of pressure sensitivity. But the bigger problem here is that it suffers from noticeable lag and therefore isn’t quite as intuitive and natural to use.

The Acer Switch Alpha 12 has everything one would expect from a detachable notebook. It isn’t quite as polished as Microsoft’s Surface Pro 4, but it comes very close. The liquid-cooling system is certainly cool, and we like that the keyboard and stylus comes bundled as standard with the device. All things considered, it is a very decent attempt at a Surface Pro 4 rival.