Here’s a full list of the notebooks we’ll be looking at:

Note: Aftershock has since informed us that our unit was an engineering sample, and that the performance discrepancies compared to other GeForce GTX 1060 notebooks was due to the CPU not being fully utilized. As a result, you should expect retail units to perform better and more in line with other similar equipped laptops.

PCMark 8 attempts to measure the real-world performance of various test systems by putting them through real-world programs and productivity applications. However, because it is reflective of the average workload of a typical user, it does not really highlight the strengths of the respective gaming systems.

That being said, the Aorus X5 v6 powered ahead anyway, on the back of its more powerful Intel Core i7-6820HK processor. The only time it fell behind was in the Work benchmark, perhaps due to its higher resolution 2,880 x 1,620-pixel display.

The Aorus had an especially strong lead in the Adobe benchmark, where it was a good 26 per cent ahead of the next closest contender, the MSI GS63VR 6RF Stealth Pro. Given that the MSI has an NVIDIA GeForce GTX 1060 and still beat the other notebooks equipped with a more powerful GPU, graphics horsepower isn’t the main consideration here, and the Aorus’ faster processor likely helped it take the lead. 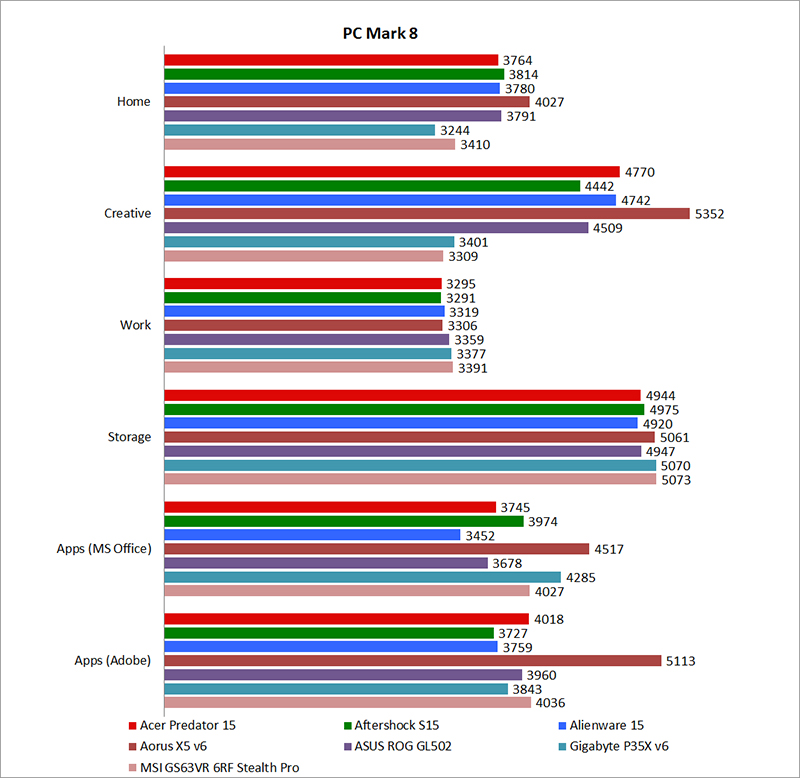 3DMark is far more relevant in assessing gaming performance, and it puts the system through a range of graphics and computational performance tests at different resolutions, starting at 1080p and going all the way up to 4K.

There’s a clear performance divide between the GeForce GTX 1060 and 1070 notebooks. All similarly configured laptops performed rather close to each other, and it’s clear that the GeForce GTX 1070 actually adds quite a bit of graphics horsepower – as much as 34 per cent in some cases. Naturally, the Aorus X5 v6 took the lead in every single benchmark, thanks to its overclockable Intel Core i7-6820HK processor. 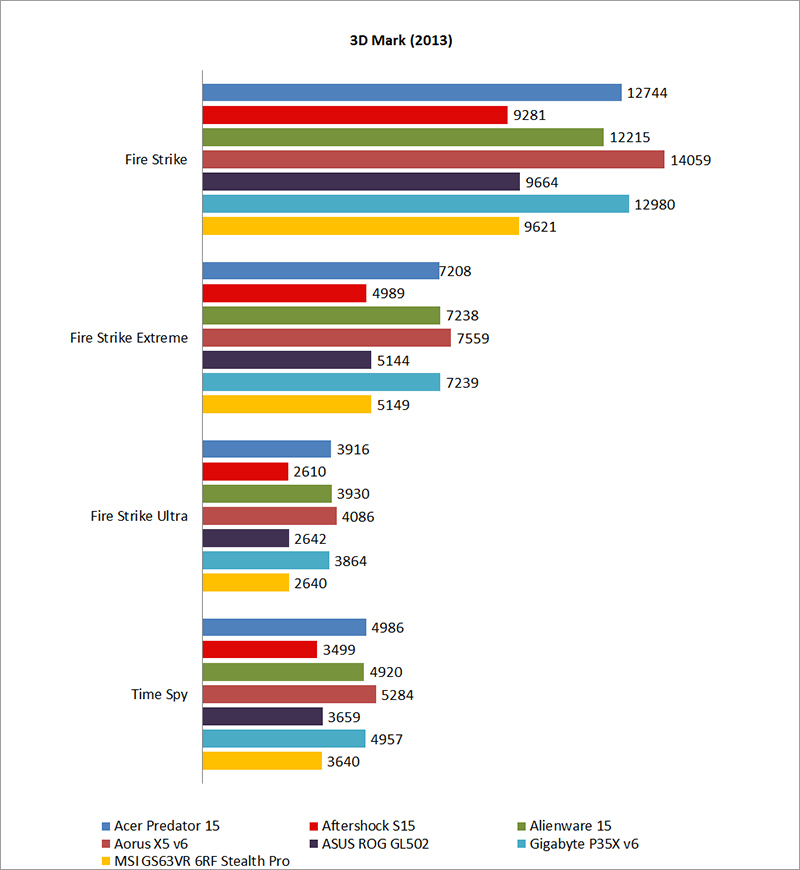 Futuremark’s new VRMark benchmark is designed to assess a PC’s ability to handle high-performance headsets like the HTC Vive and Oculus Rift. If a PC passes the Orange Room test, it is ready for the latter two systems.

That said, all the notebooks passed the Orange Room benchmark, so all the machines reviewed here are in theory ready for VR. 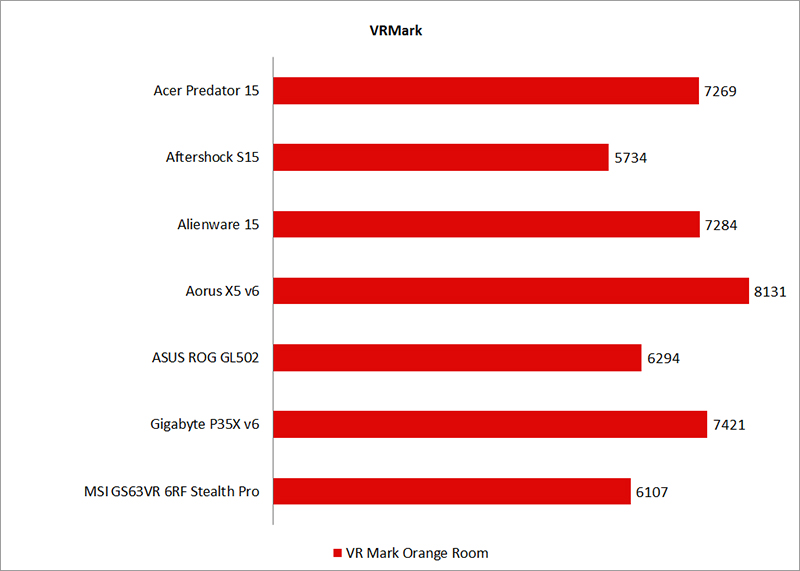 The same was observed in Ashes of the Singularity as well, where the Aorus powered ahead on thanks to its more capable CPU, which comes overclocked to 4.0GHz out of the box as well.

It’s clear here that the CPU is the limiting factor at High settings, as there’s less of a difference between the GeForce GTX 1060 and 1070 notebooks as you would expect. On the other hand, the Aorus notebook managed to leave its competitors in the dust as it wasn’t held back by the same Intel Core i7-6700HQ CPU.

The Aftershock S-15 also falls even further behind its counterparts here, perhaps due to the lack of optimizations at the firmware level.

At Crazy settings however, GPU horsepower becomes more important, and the GeForce GTX 1070 laptops reestablished their lead by as much 28 per cent in certain matchups.

More tellingly, the DirectX 12 benchmark appears to have alleviated some of the CPU bottleneck at High settings, perhaps due to the lower CPU overhead involved. 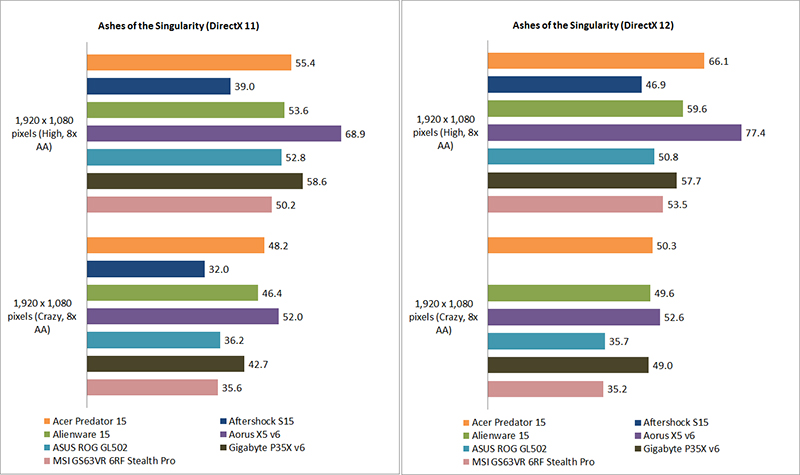 In Middle-earth: Shadow of Mordor, notebooks with the GeForce GTX 1070 were quicker by as much as 36 per cent at Ultra settings. Clearly, the performance differential between the GeForce GTX 1060 and 1070 is not insubstantial, and that’s exactly what you’re paying for when you pony up for a 1070.

But oddly enough, the Aorus laptop didn’t do so well here, falling behind its 1070 counterparts with a weaker Intel Core i7-6700HQ processor. 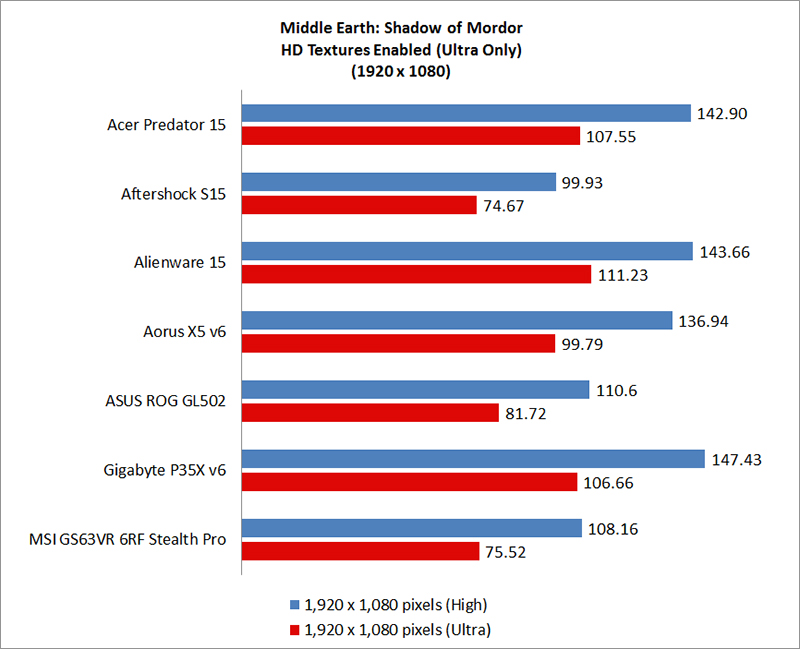 There was a return to normalcy as the Aorus X5 v6 took first place in The Division, although only by a small margin over its fellow GeForce GTX 1070-equipped laptops. For one, it was just 3 per cent faster than the Acer Predator 15, the next best performer, at Ultra settings.

In comparison, the Acer Predator 15 was a whopping 41 per cent faster than the MSI notebook at Ultra settings, reinforcing just how big a gap exists between the two classes of notebooks. 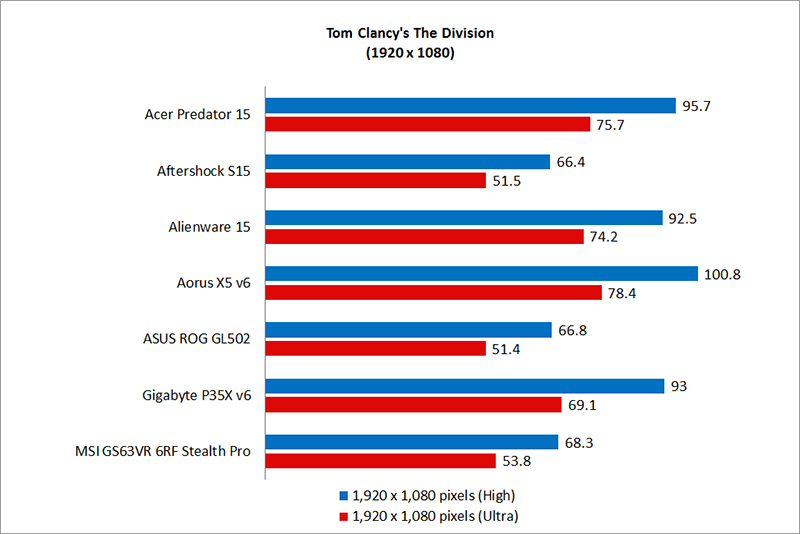