The portability of a 14-inch notebook, but the body of a 15.6-inch laptop. The MSI GS63VR 6RF Stealth Pro is a freakishly thin and light (for a gaming notebook that is) laptop. Its petite dimensions are its strongest selling point, and there are few notebooks out there that rival it if you’re gunning for maximum portability in a gaming machine.

As a result, it’s hardware specifications aren’t the most powerful, and it comes with a GeForce GTX 1060 instead of the beefier 1070. This is enough to run most titles at 1080p today, but it can appear a little underwhelming for the laptop’s stiff S$3,199 price tag. What’s more, the other GeForce GTX 1060-equipped notebooks retail for far less, with the ASUS ROG Strix GL502VM costing just S$2,498 and the Aftershock S-15 going for as low as S$2,158.

MSI also hasn’t included G-Sync support on its 1080p IPS display, which we think to be quite a glaring omission for this price bracket. 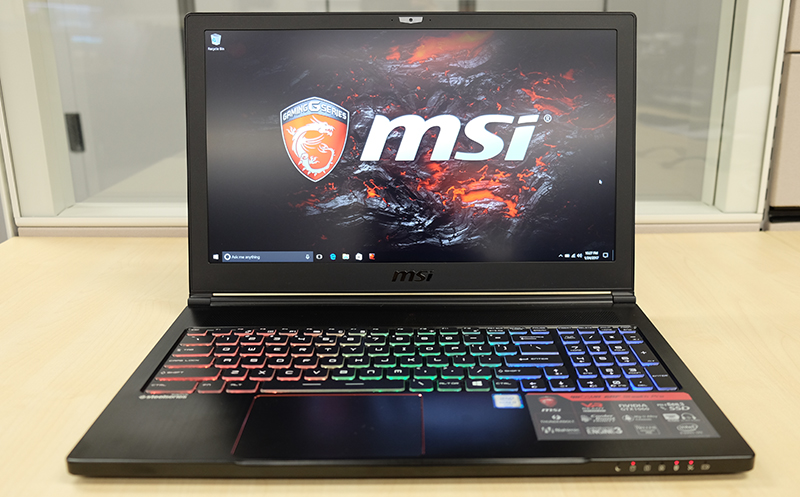 In other words, these are decent specifications, but nothing cutting edge. You’re essentially paying for the premium design, good looks, and class-leading portability (only 17.7mm thick). However, if performance-per-dollar matters more to you, you’re better off looking elsewhere.

Having said that, this is one good-looking and well-built notebook. The magnesium-lithium alloy chassis sports a beautiful brushed metal finish, and the notebook feels quite solid despite weighing only 1.8kg. However, there’s actually considerable flex to the speaker grilles above the keyboard, so the rigid construction doesn’t extend to all parts of the notebook.

To keep everything cool in such a small chassis, MSI has gone with large intake vents that rely on high airflow instead of beefy thermal modules. Air is drawn through vents on the bottom and back and then exhausted out the side, courtesy of a single fan for the CPU and two for the GPU. The bottom of the notebook is also covered with felt, which may allow it to sit more comfortably on your lap. Unlike some of the other notebooks here, the MSI is definitely light enough to be used comfortably this way. There’s also a small design quirk in the form of the power button placement, which sees the button located on the right edge of the notebook. This location is far from ideal, and we often found ourselves accidentally putting the notebook to sleep when we were simply readjusting its position on the desk.

The placement of the charging port could also be better thought out. It sits in the middle of the notebook’s right side, and that wouldn’t actually be a problem if not for the right-angled charging jack, which you may have to rotate to ensure that it doesn’t block the other ports.

Another quirk is the location of the Caps and Scroll Lock indicators on the front edge, alongside the system status and HDD LEDs. This is a strange choice, as you probably won't be peering at the edge of your notebook if you want to find out if you have Caps Lock on. It simply makes much more sense to have the indicators for these functions placed on the keys themselves instead.

Fortunately, the keyboard and trackpad are well implemented, and typing is quite enjoyable despite the notebook’s slim dimensions. The trackpad is responsive and accurate, and the integrated left- and right-click buttons click satisfyingly with pleasant feedback.

The RGB backlit keyboard is divided in three customizable zones, and the backlight shines through the translucent edges around each key and the key legends. There are three levels of LED brightness, and you can customize each zone from up to 16.8 million colors and pick from some of the preset effects like Breathing and Wave. All this is done through the MSI Dragon Center utility, which the notebook comes pre-installed with. The software puts a variety of other tools in your hands as well, including the ability to set custom fan speed curves for the CPU and GPU. 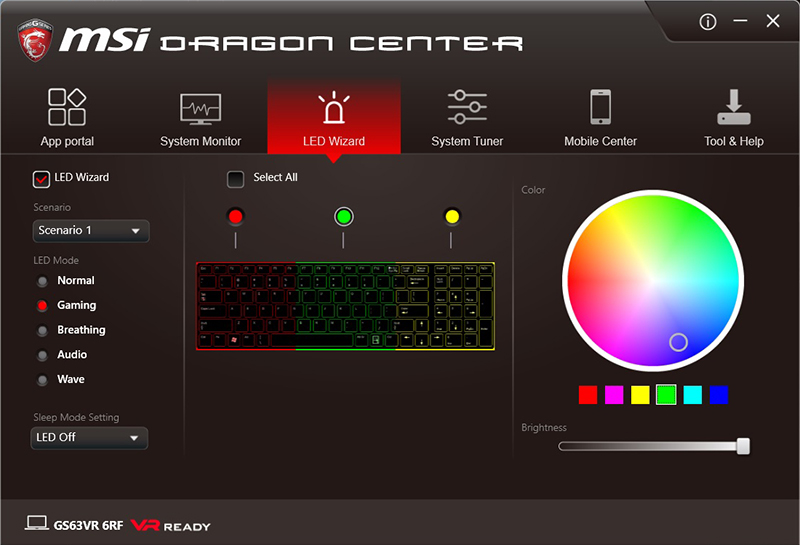 The keyboard itself supports the SteelSeries Engine 3 utility and all the attendant features like GameSense. For now, GameSense support is still limited to three games – Counter-Strike: Global Offensive, Dota 2, and a modded version of Minecraft – but the idea is to allow the RGB keyboard to give you visual cues as to your status in game. You’re in luck if you play one of these three games, but otherwise, this is more a nice-to-have feature rather than one that provides actual utility.

We did encounter some problems with the audio however, as we experienced a ton of crackling and distortion through the speakers and headphone jack until we did a clean install of the audio drivers. That aside, sound from the bottom-firing speakers were unremarkable, although you do get to make various tweaks using the Nahimic 2 audio software. This is a pity, given that MSI has taken pains to emphasize its use of an ESS Sabre Hi-Fi DAC to support up to a 24-bit/192KHz sampling rate.

That aside, one strong point is the Thunderbolt 3 port, which joins three USB 3.0 ports and one USB 3.1 port in providing you with a wide range of connectivity options. There’s also a DisplayPort and HDMI connectors for video output, so you should never find yourself wanting for ports. MSI hasn’t taken its slim profile as an excuse to omit vital ports, and that’s a point definitely worth highlighting.