The Illusion of Choice

The Illusion of Choice

Given that our article today is a blockbuster of a shootout involving up to twelve graphics cards, you may be slightly bemused by our choice of title. Yes, despite the variety of NVIDIA's GeForce 8600 GTS cards we have gathered for this article, ranging from the standard to overclocked versions and featuring disparate cooling solutions (though many are reference models), there's this nagging feeling that there really isn't much of a choice when it comes to mainstream DirectX 10 graphics cards. As most of you are aware, ATI has not yet launched its competing DirectX 10 products, meaning that for the last six months at least, NVIDIA has had virtually no competition when it comes to DirectX 10 compatible graphics cards.

Perhaps this lack of competition explains the less than convincing value that the GeForce 8600 series represents. Our recent performance review of the NVIDIA GeForce 8600 GTS showed the newcomer struggling against older but competitively priced models like the ATI Radeon X1950 PRO. The obvious advantages offered by the GeForce 8600 GTS - its DirectX 10 pedigree and the new HD processing engine - is quickly offset by its limited 128-bit memory bus and predictably unattractive launch prices.

Nevertheless, if you are shopping for a new mainstream graphics card now to tide over the next couple of years and have become impatient with ATI's numerous delays, there are few viable choices besides the GeForce 8600 GTS, but all are from NVIDIA. It also helps that NVIDIA has been excellent at meeting demand for its new graphics cards. GeForce 8600 GTS is another example of a hard launch, with massive quantities of the cards available in retail. Which particular brand/vendor should you go for? That's the question that we hope to answer with our 12 cards shootout today. Starting from the alphabet A, we have Albatron to kick off:

Our first contender from Albatron is your standard GeForce 8600 GTS. NVIDIA's familiar green is preferred for the cooler shroud and the PCB, with Albatron stamping its own brand via a simple cooler decal. Clock speeds too are typical, with the core running at 675MHz and the DDR3 memory at 2000MHz DDR. Finally, the bundle reflects its mainstream segment; there is no game or applications included, though the minimum expected accessories are present. 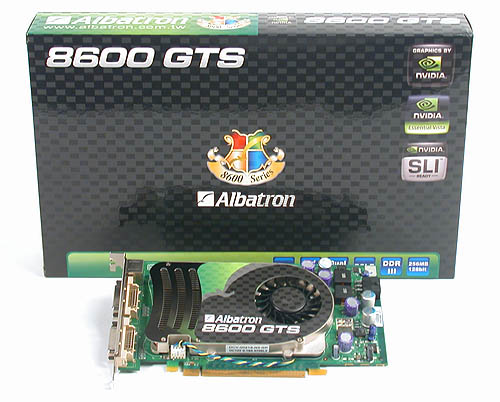 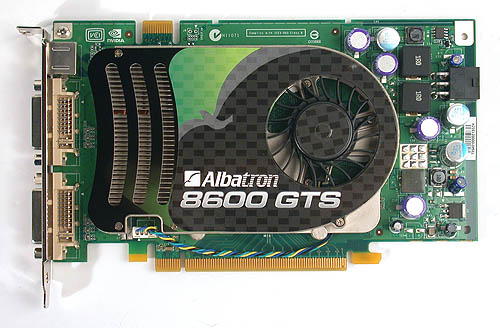