YouTube Kids app delivers worry-free edutainment, for the most part 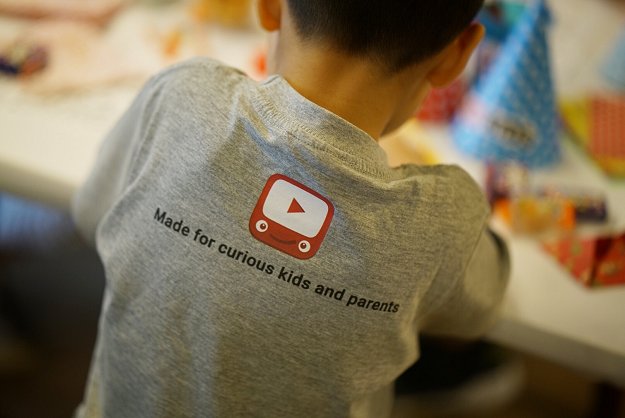 It's not easy being a parent in a world filled with distractions. More so for kids who cultivate further bad habits like the need for instant gratification and getting glued to phones and tablets for their non-stop personal entertainment such as on YouTube.

Remember the recent study published on Straits Times that recommended gadget/TV time for young kids to about an hour a day? It couldn't have come at a better time since it’s all too frequent that I notice parents babysitting and feeding kids by stuffing a phone or tablet in their face and running an endless loop of videos.

But time spent with these devices isn't the only problem - it's the access to unlimited content from all genres and audiences that may not suit a young child. 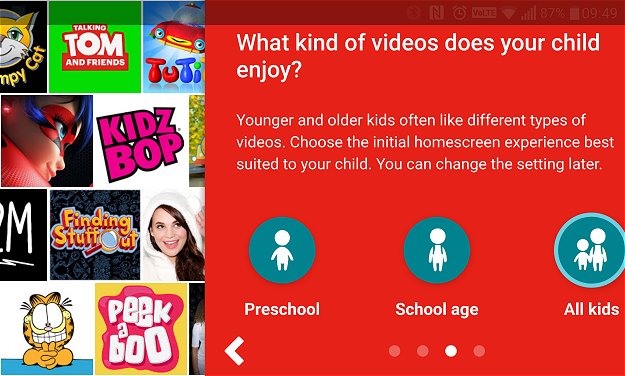 To tackle these issues somewhat, YouTube launched a child-friendly app called YouTube Kids last year and is now finally available in Singapore for both Android and iOS since 12th November! Made for kids aged 2 to 8, this app is designed with these young individuals in mind with a simple and playful interface.

For example, all video loading/waiting phases see floating bubbles that get popped. And should a video fail to load due to unavailability of the content or due to poor internet connection, you might see the app's sad face. Definitely cute. Accompanying the visuals, the navigation and swiping effects have audio cues that are unique to the app and lend an air of zaniness to the app. 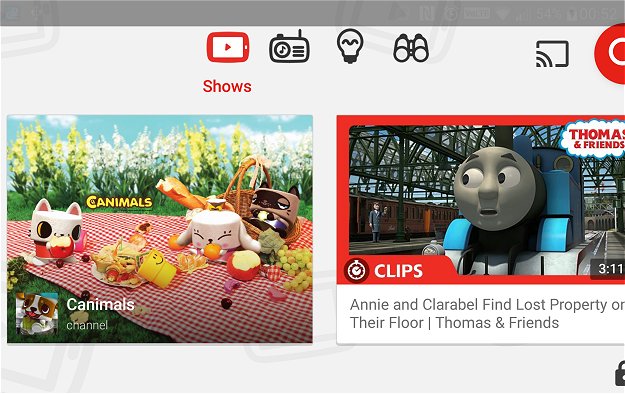 We’ve built the YouTube Kids app to be a more family-friendly version of YouTube, a place for kids to explore their imagination and curiosity. You can browse channels and playlists in four categories: Shows, Music, Learning and Explore. 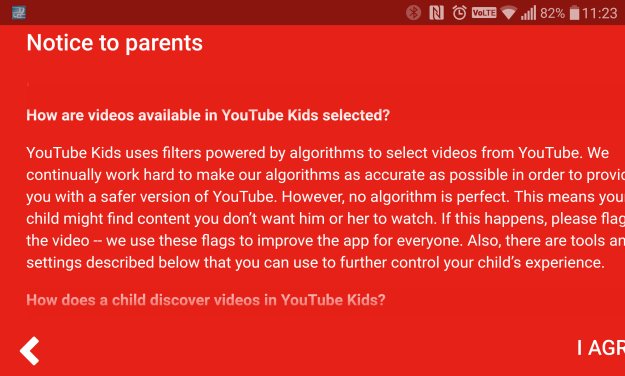 It is important to note that the content on YouTube Kids is not manually reviewed, but algorithms are in place to exclude content that are not appropriate for kids. As with YouTube content itself, anything that you deem inappropriate can be easily flagged to the YouTube team and make the app better for all kids.

While the initial home screen lays out safe content for kids in the specific segments of Shows, Music, Learning and Exploration, where the app really works its charm is by a combination of user consumption behavior and what one has searched for. In fact, a new tab called Recommended, kicked in as soon as I've watched a couple of videos and made a coupe of searches.

The search function opens up a whole new avenue of video content possibilities that's not reflected in the default segmentation. Again, the video search results are not subject to human review and are offered based on an algorithm that's trained to return relevant and appropriate content. Suffice to say, my actual trials returned reasonable age-appropriate content and I don't think parents need to overly worry about the lack of humans vetting content. After all, there are millions of parents out there to also help flag out anything inappropriate in addition to the algorithms put in place for the YouTube Kids app. And that's one of the biggest plus points for using this app - worry-free consumption for the young ones.

One of my earlier searches was on "Fire Engine" in the hopes that the app will pull out the popular Fireman Sam cartoon series. Though it wasn't the first result, a few swipes away, I found what my son would love to watch. 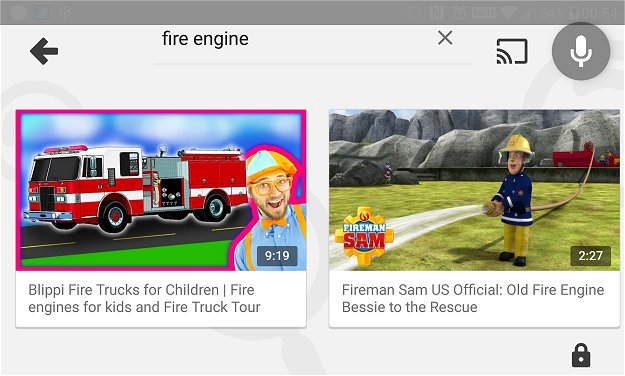 Next up, I searched for "Trucks" and the app pointed out up exactly what I was looking for. 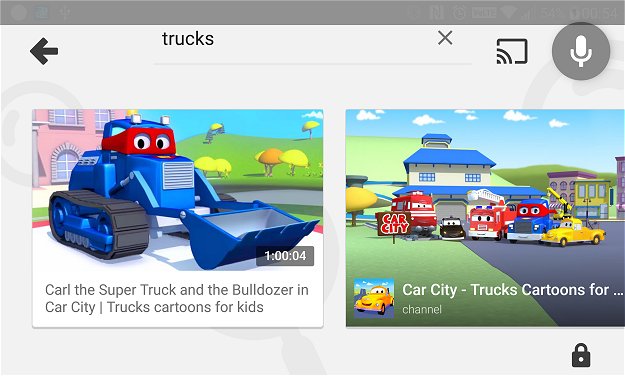 Then I tried something more complex and was pleased to get the desired results. Yes, it's time for me to sketch an Optimus Prime so that my three-year old can color it. Or better yet, for him to give it a shot. 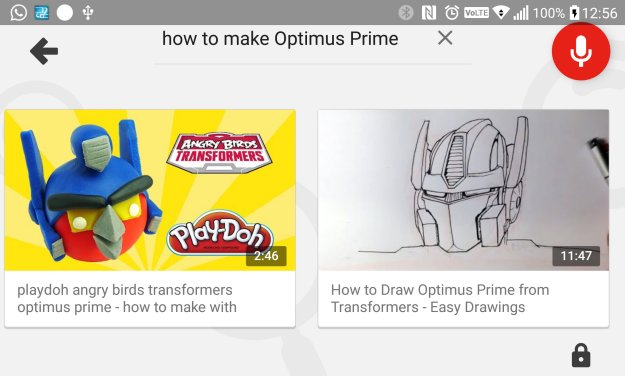 If there's one thing that I wish the search function could improve was the default input method - the default is a text input search, while the voice option is another button away. Perhaps text entries are natural for adults, but for young kids, voice should be the default option since they can't get spelling right till much later, let alone type out what they want. 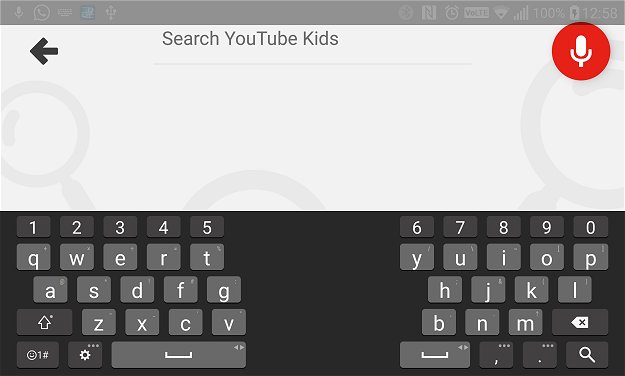 If you do have a particularly tricky child or really wish to limit the options available, you could disable the search function altogether, but that would mean the Recommended tab will only serve out suggestions based on what's viewed while the search is disabled. You can also choose to use this option in conjunction with further parental controls like a timer that would lock the app when the preset time is over. So now the app plays the 'bad guy' while the parent pacifies the kid to move on to other activities - that is until he/she knows how to get around the limitations and use the full YouTube app instead.

As iterated earlier, once you've interacted with the app a little (some searches) and watched a few shows, Google's YouTube platform does its backed magic to start recommending other preferred video content that your kid might like to watch. This is very useful from a content discovery perspective since the default segments are largely pre-curated/flavor of the season listings. Oddly, my first few recommendations turned out to be a Russian animated series called Masha and the Bear! 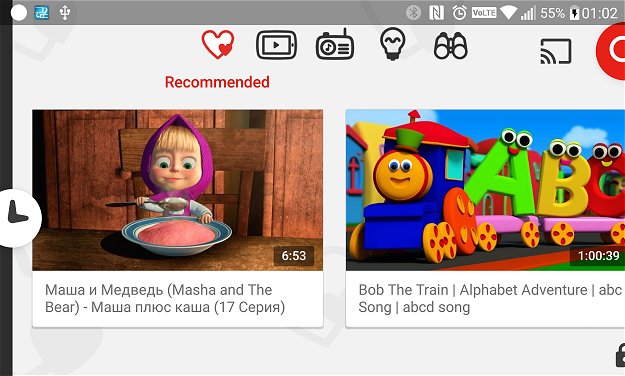 So I was curious and gave it a go. I was pleasantly surprised with the quality of the animation and it was certainly kid friendly, but I guess it's more for toddlers who can relate what's happening on the screen than to understand what's being said. Captions are available, but it's definitely beyond the intended age group to read captions in such short bursts. That said, a few swipes later, I found a bunch of great recommendations that are a perfect shoo-in for what my boy loves to read about and recite his rhymes:- 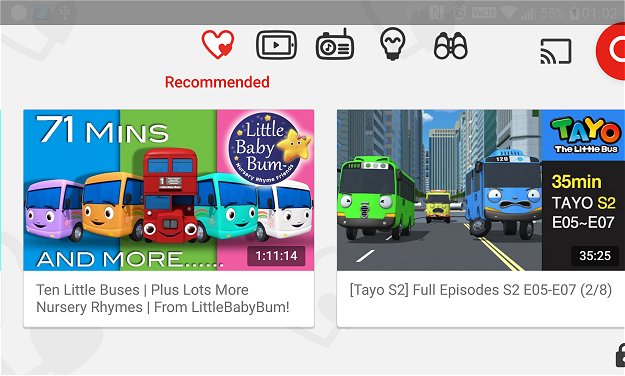 A safe haven of video content for the young ones... well, almost. 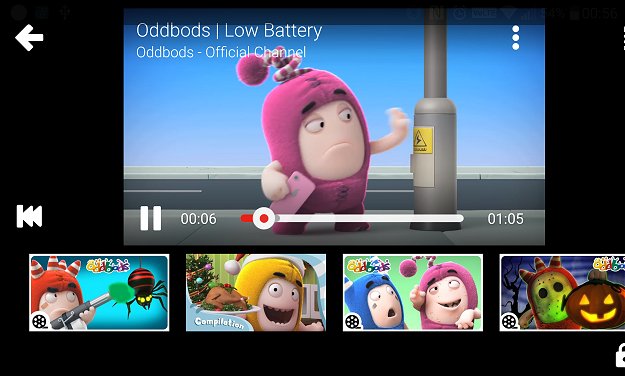 All things considered, I must say that the YouTube Kids app is exactly what many parents need for their young ones - especially in terms of controlling how long they spend time with online video entertainment. This is especially true if your munchkin has already been exposed to videos for some time and you're now trying to control their leash.

However, if your toddler has been strictly trained to not indulge in online video or even use smart devices, then my advice is to keep it that way as long as you can. And if you must start giving them their own screen time, you'll know you can rely upon the YouTube Kids app when you need it - for the most part.

I say most, because there tons of cartoon segments that are more suitable for more knowledgeable kids (usually 6 years and older) as they tend to entertain older kids and all the way to adults. As such, the context of certain scenarios and behaviors, while understandably humorous, might cast the wrong mindset or messaging to much younger toddlers when left unguided. It really depends on each kid's own personal learning curve and an understanding of the real world versus the imaginary world. As such, the onus is still upon parents to guide their little tots when viewing such cartoons.