Weekend Drives: Audi A3 Sportback (2021) - Nothing entry-level about this compact hatchback

Note: This article was first published on 15 December 2021. 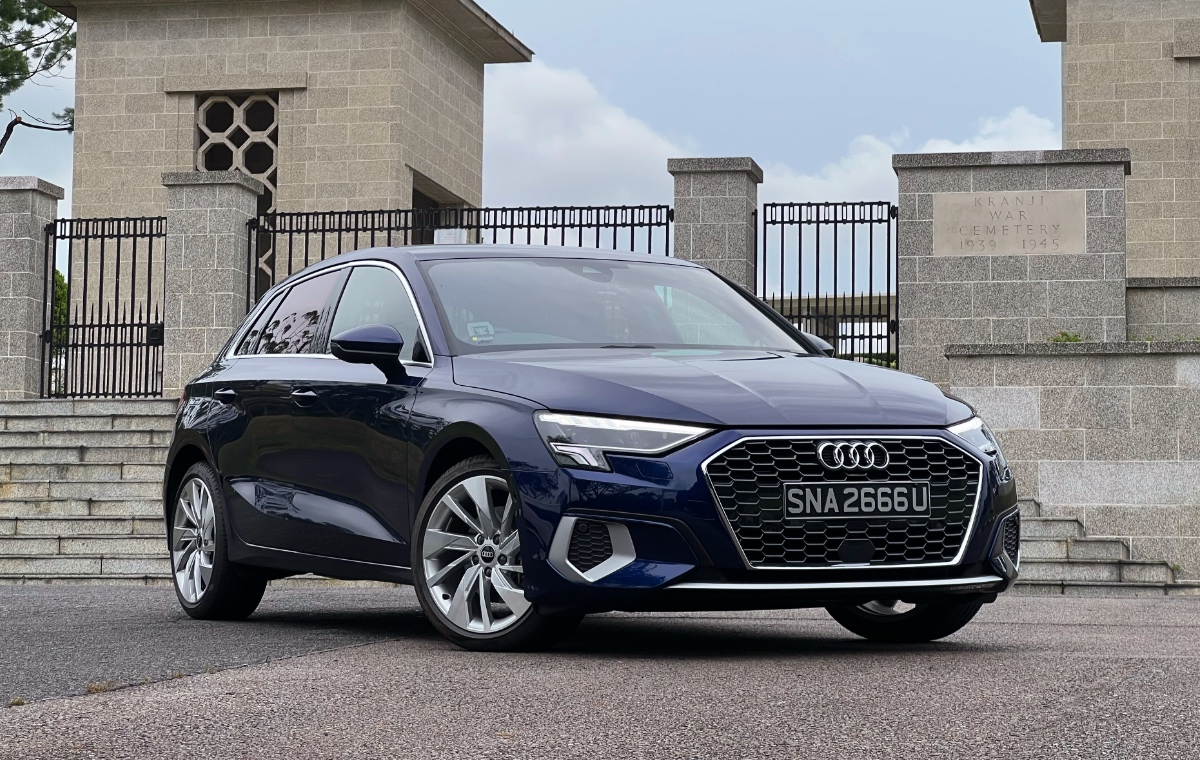 Like any successful long-term relationship, premium compacts require compromise to work. Luxury marques agonise for months over how they can make their cars look and feel expensive without cutting too many corners. Get it right, and you can have a huge hit like the last-generation A3.

Let's get price out of the way first. Because of high COE prices, the A3 Sportback starts at S$192,720, which makes it very premium indeed. It wasn't so long ago that I remembered you could get an A3 for a whole lot less. That's an issue with our COE system that remains to be addressed.

Any any rate, in line with Audi’s new design direction, the A3 has a more bellicose demeanour. The front grille is large and the car is all sharp lines and angles. This extends to the doors and flanks. Sizable wheel arches give real shoulders and hips. The only tell-tale sign that this isn't one of Audi's sportier S or RS model is the vast space between the tyres and fender. Still, my preference is for the more restrained look of older Audis, but as they say, looks are subjective. And annoyingly, the A3 buys into the trend of fake vents and exhausts. The front "intakes" don’t let anything pass them and the twin “exhausts” are purely for show. 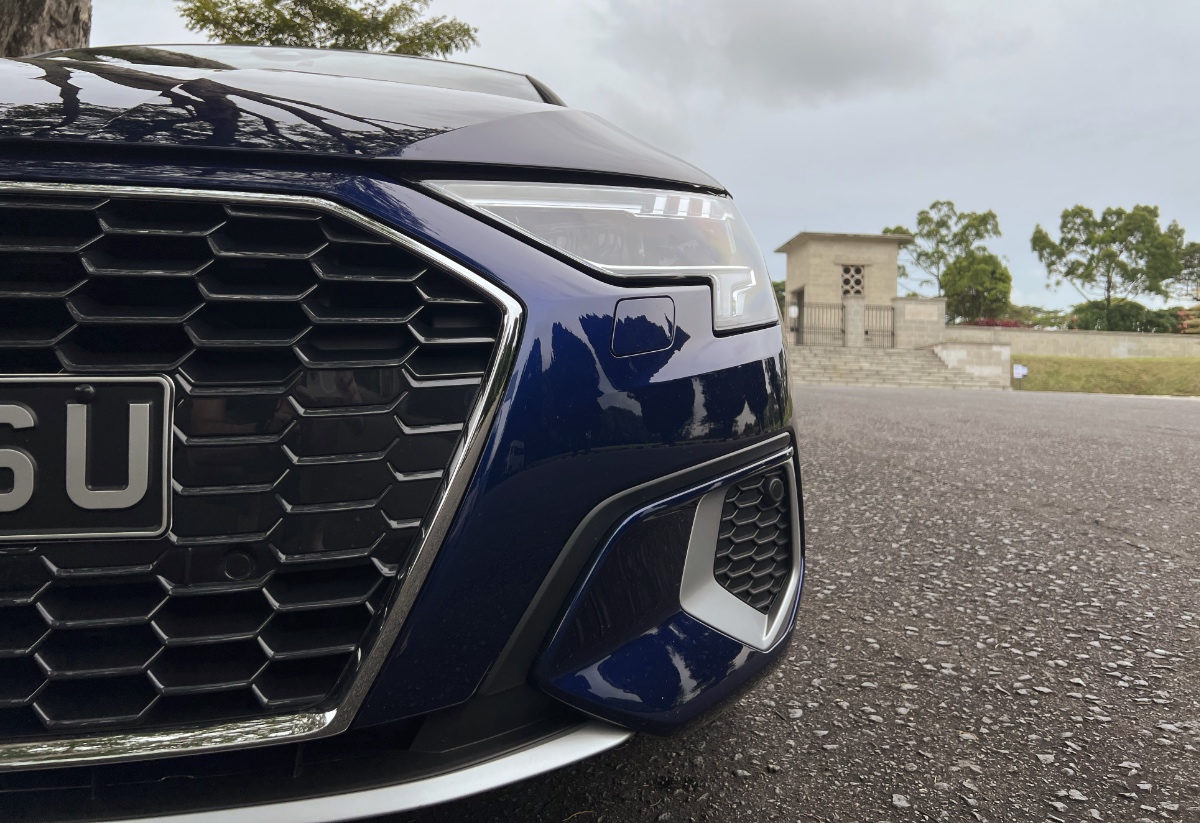 Similar to its predecessor, this latest generation of A3 is available in sedan and hatchback guises. The former has always been more popular but I think the latter looks better and more balanced.

Crucially, most people would be hard-pressed to tell that the newest A3 was the result of any penny-pinching accounting exercise. That’s because, from the moment you open the solid doors, you are greeted by pleasant materials, thoughtful design, and cutting-edge tech. 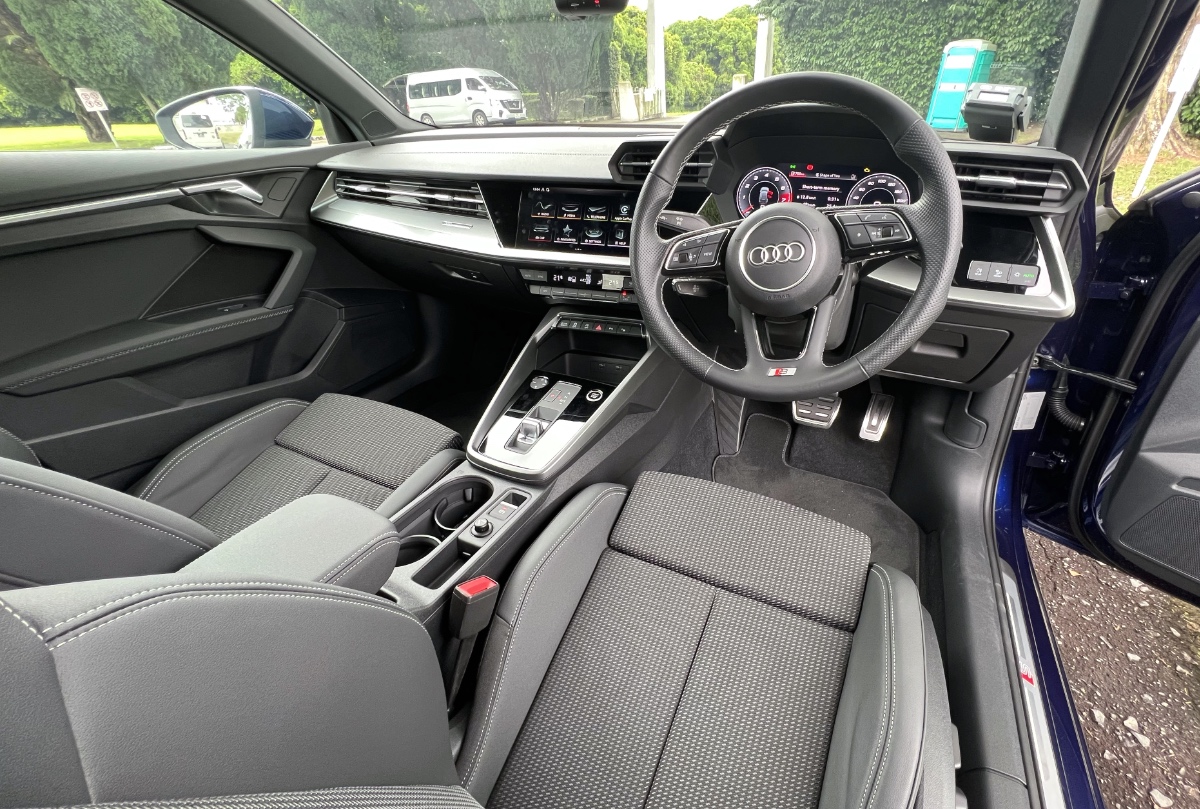 Inside, the driver is greeted by a modern, sporty, and more driver-centric cabin – as evidenced by the sharp-looking dashboard, the Lamborghini-inspired aircon vents, customisable ambient lights, and the fact that the controls are now angled toward the driver. With some imagination, the A3 owner could imagine he or she is in an S3 or RS3. On a more serious note, this new interior allows the A3 to be more competitive against the Mercedes A-Class, which has a stellar interior in this class. 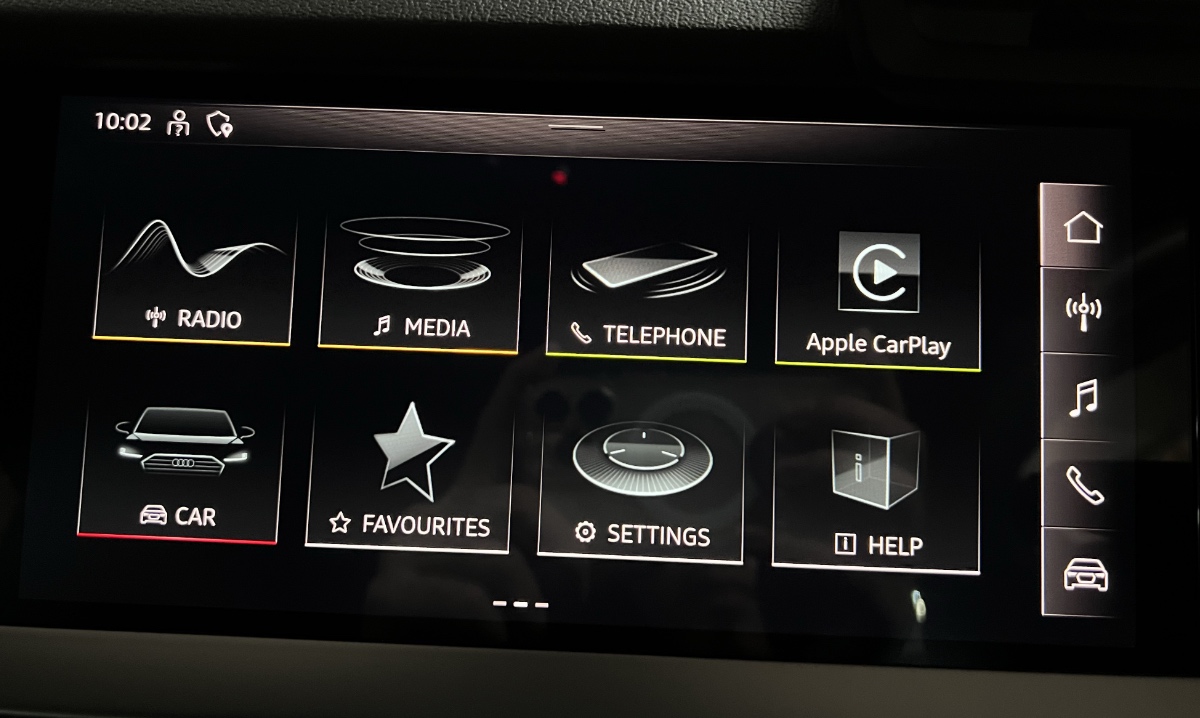 Like any modern Audi, there are no analogue dials to be found, instead, you get Audi’s highly customisable high-definition Virtual Cockpit. The infotainment display is large, sharp, and supports touch inputs. More importantly, the system runs smoothly with no perceptible lag – as it should in any premium marque. And equally important, it supports wireless Apple CarPlay and Android Auto. Below the display in the centre console is a wireless charging pad for your phone. And if your phone doesn't support wireless charging, there's two USB-C ports there too. And speaking of sports, there are another two USB-C ports below the rear air-con vents for passengers sitting in the back.

Audi should also be applauded for sticking with physical controls for commonly-used features like climate controls and drive mode select. And in keeping with other models in the Volkswagen group, the gear selector is now a tiny toggle. Though it looks inadequate at first, it’s pleasant to operate and actually very effective. The weighting, it’s worth pointing out, is very well-judged. Don’t dismiss it until you try it. 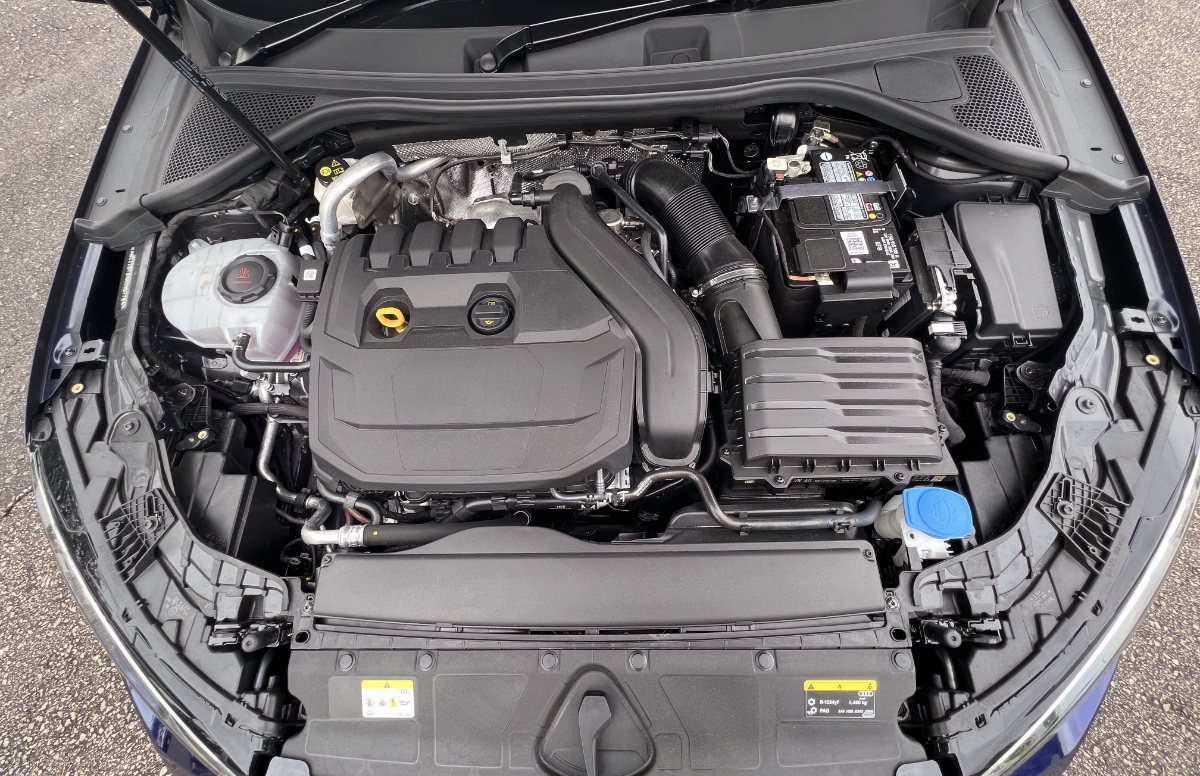 Under the hood is the same turbocharged 4-pot 1.5-litre unit that is found in stablemates like the Golf and Octavia. Peak power and torque are 150hp and 250nm. Because of its higher power output, the new A3 is now a Cat B car. While some will bemoan Audi’s decision not to offer more frugal versions of the A3 here, there are some positives.

To start, this larger unit is punchier and more refined, especially when compared to its predecessors that have the 1-litre 3-pot. Unless you absolutely pin it, it feels and sounds refined. It’s a mild hybrid too so it has batteries to give it a little more shove off the line and to improve fuel consumption. The higher power output also means it accelerates with greater urgency. And despite the increased performance, fuel efficiency doesn’t seem to have suffered greatly. If you are really careful and the traffic gods are kind, you can see 17km/l appearing on the trip computer. But in more normal circumstances and over a weekend with nearly 300km covered, 13.5km/l is a more reasonable target. The ride is good for its class. Mostly it's comfy and cushy, but it's also firm enough to give drivers an idea of what’s happening but not so that it becomes unpleasant. The multi-link suspension in the rear soaks up humps with great competence. Road noise is well-controlled but can be problematic on poorly paved roads. I suspect the culprit is the Pirelli Cinturato P7 tyres that came with the car. 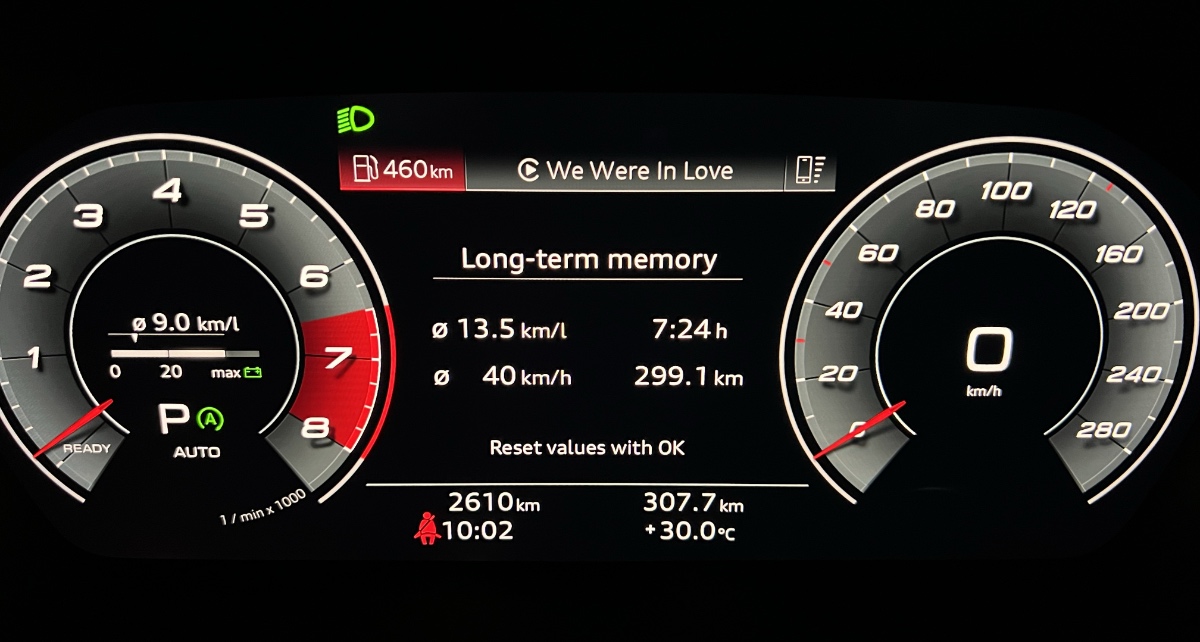 The new A3 will be judged mostly against BMW’s 1 series and Mercedes’ A-Class. The BMW only comes in 116i guise and that three-pot motor can’t compete in the refinement and power stakes. A comparable A200, on the other hand, is 20 to 30 grand more. Audi, it seems, has nailed it again. The new A3 Sportback is a very likeable premium compact.