Waiting for the Right One

I have a confession to make. I'm a Linux dabbler. I don't actually use the many different flavors of Linux floating out there. But I do try them, hoping to find one that I can wholeheartedly recommend to anyone looking for an alternative to Windows. Canonical's Ubuntu has been one of my favorites in recent years. It is polished beyond the typical Linux distro and has a great community behind it if you encounter any problems.

So with the latest version, Ubuntu 10.10 or 'Maverick Meet' as it's dubbed released recently, I decided to give its Netbook edition a spin, since it touts a new netbook-friendly Unity interface optimized for the limited screen real estate on a netbook.

Since my netbook, a Samsung N220 (Intel Atom N450 with 1GB RAM) comes with no CD drive, I used the instructions found here to get the ISO and the utility to create a bootable USB drive so that I can boot up or install Ubuntu with a USB thumb drive. It turned out to be the wrong choice.

First, the Universal USB Installer mentioned apparently hasn't been updated with Ubuntu 10.10 Netbook edition in its dropdown menu. Fine, I selected a general option which allowed me to point to the Ubuntu Netbook ISO I downloaded earlier and it successfully created a bootable USB drive with Ubuntu Netbook Edition. I plugged it into my netbook's USB port and rebooted, choosing USB Boot.

It hung while booting from the USB drive, with a single line telling me nothing useful except that it wasn't my netbook's fault. I tried to boot into Windows and install from inside Windows using Wubi. That was when I encountered a permission denied error statement similar to this. Great, a known issue with the installer.

Determined to get it working, I tried another bootable USB utility, UNetbootin. This time it worked, and I proceeded to install Ubuntu from the USB drive. The process was as smooth as one gets and it came with some very useful features, like enabling my Wi-Fi early during the installation process, so that the installer can download system updates even as it is installing to my hard drive. It certainly saves some time and ensure the system gets updated as soon as possible.

Soon, I had my first experience with Unity, which groups your applications into eight main sections. There's a dock (launcher) at the side which can be customized with your oft-used applications and if you need more desktop space, Workspaces gives you four 'desktops' to work with. 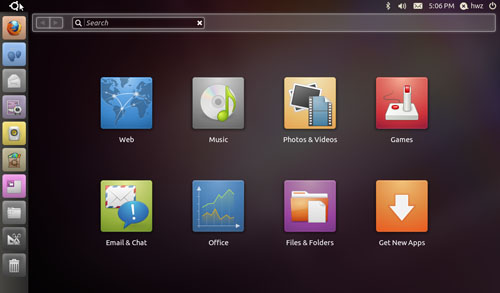 I spent some time trying out the default Firefox browser (which just works, though you'll need to install the Flash plugin), playing music and of course, movies. Unfortunately, the default Movie Player kept giving error messages for the two videos I tried (including a .mkv file).

The good thing is that all the applications you'll ever need is available through Ubuntu Software Center. With just a few clicks, VLC media player was downloaded and voila, it could play my videos perfectly, with hardware GPU acceleration enabled too.

And that to me is the best and worst of Ubuntu and maybe Linux distros in general. Some of the most basic stuff that you'll expect to work, from the Wubi installer to the default movie player had some showstopping bugs. Yet when it works, it surprises with some nice attention to details.

So far, Ubuntu has done a great job at overcoming the initial hiccups I encountered. There are moments when the netbook's basic specs show their limitations, when applications take a bit longer than I expect to start up, but Unity has helped to keep the frustration level down.

Which brings us to the final question - is Ubuntu 10.10 the perfect 10? Well, I don't know...perhaps not until I can play Civ 5 on it without having to jump through numerous hoops. But a Linux notebook for work? I can definitely see that happening.