Televisions, They Are A-Changin' 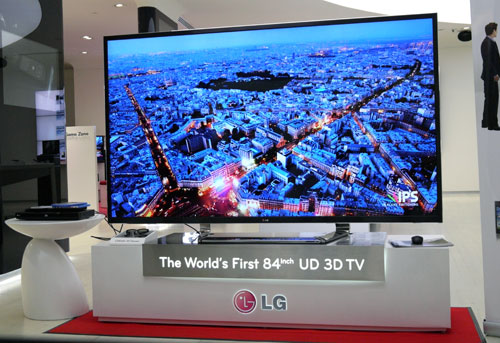 It wasn't too long ago when HD-Ready panels gave way to Full-HD sets. And yes, consumers worldwide have been lapping them up since. For many of the major television brands, their current TV portfolios are typically populated by LED-based LCD displays, while models illuminated by CCFL backlights, and maybe even plasma displays, have been relegated to the backseat. For that matter, Samsung's 2012 release hardly carried a single CCFL entrant if anyone cared to notice. At the higher end of the spectrum lies the 3D contingent, often garnished with Smart TV frills to seduce the buyer. That's pretty much the TV landscape as things stand.

Truth is, the television market is evolving, but it's also entering an awkward phase. With OLED displays hampered by production delays, a handful of TV makers have taken the initiative to cushion this "waiting period" with 4K televisions, or Ultra High-Definition TVs if you will. These screens pack a formidable resolution of 3,840 by 2,160 pixels, or approximately four times the picture resolution of a Full-HD panel. Toshiba, followed by Sony and LG, have already fired their first salvo of 4K displays here, albeit at extravagant prices. The price gap, however, between Toshiba's 55-inch RZ1 and LG's 84-inch Cinema 3D LM9600 is demarcated by a margin of approximately S$5K; a relatively small difference considering the 84-inch LM9600 is 29 inches larger than the RZ1.

There's little doubt 4K sets will withstand the test of time. The evolution of television displays dictates so. However, there are a few things we must take into account. A recent Television Market Tracker Report released by analytics provider IHS iSuppli anticipates worldwide shipments of 4K LCD TVs to grow to 2.1 million units over the next five years. However, they'll only account for 0.8 percent of global LCD TV shipments by 2017. In other words, their numbers would grow, but not by much. The report also suggests that 4K displays are merely "stopgap measures" before the release of OLED TVs. Akin to teething problems suffered by 3D sets when they first arrived, a lack of native 4K content and exorbitant prices will serve as deterrents before 4K TVs enjoy mass adoption status.

Next, there's the OLED vs 4K enigma to consider. Although LG or Samsung have yet to launch their OLED TVs here, there's a likelihood 4K and OLED sets would jostle for shelf space in the midst of 2013. Based on previous announcements made by the South Korean firms, they are likely to release their 55-inch panels with organic LEDs anytime soon. These screens will be prized mostly for their scary thin depths, high contrast ratios, fast response times, and deep black levels. Lovely.

Taking all of these factors into account, there's little doubt that the TV industry is rumbling towards the costlier side of things. Pound for pound, the OLED contenders are probably within reach of consumers with slightly fatter wallets at the onset. A single purchase of an 84-inch 4K display, however, is enough to sap an average Joe's bank account given their exorbitant price tags. Compared to Full-HD LCD screens, on the other hand, the profit margin for each 4K set sold is undoubtedly higher than a conventional model.

But what TV makers really ought to question is this: are the majority of consumers willing to pay such a high premium for enhanced picture quality. For the sake of a working man like me, I am hoping manufacturers wouldn't neglect the less fancy models for now as well as the near future.