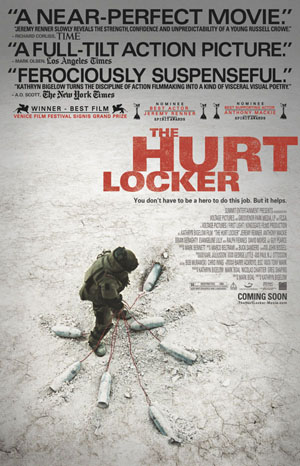 This isn't the first time the Academy snubbed high-tech wizardry for good ol' story-telling. As my Supervising Editor, Terence, points out, they did this in 1992 when they gave the award for Best Picture to The Silence of the Lambs instead of Beauty & The Beast.

They did the exact same thing back in 1977 – the year of Star Wars. With special effects provided by the impressive Industrial Light & Magic, Star Wars was way ahead of its time as far as visual effects were concerned, and not surprisingly, it was up for Best Picture for that year's Oscars. Unfortunately for Star Wars, they didn't win. The award went to Woody Allen's romantic comedy Annie Hall.

As much as I love Star Wars (I'm a big fan of Vader), I concur with the Academy that Annie Hall is more deserving of the win. And not to belittle Star Wars and George Lucas, but I also think that Annie Hall, in its portrayal of human relationships, is more complex.

And it's the same with The Hurt Locker and Avatar. Sure, Avatar is deeply satisfying and an entertaining visual treat, but The Hurt Locker is more intense, multi-layered, dramatic and original. It offers a peek into an aspect of the human psyche in the same way Annie Hall did as it explored human relationships. All in all, it's just more smart.

And consider this, while Avatar was made with a budget of in excess of $200 million, The Hurt Locker was filmed for only a paltry $11 million.

So you see, sometimes, all that matters is the story you are telling.