Apple's Back to School promo is back with discounts on Macs and iPads, free AirPods, and more
Blogs

Originally believed to be just temporarily ceasing operations due to circuit breaker regulations, news of Smove’s liquidation sent shockwaves amongst car-sharing users and car rental companies, myself included. Its closure is unexpected, as Smove was popular amongst car-sharing folks, with their one-way drop-off model being its most attractive point amongst other hourly charging car-sharing operators.

Smove’s closure means only five car-sharing operators remain, namely TribeCar, Car Club, WhizzCar, CarLite, and BlueSG, with BlueSG now being the sole operator offering one-way car-sharing option. In this post, I will touch on some aspects of the car-sharing business model and some learnings that other operators (present and future) should be mindful based on Smove bowing out of the market.

(Caveat: I was only exposed to the car-sharing business in late-2017, as such I am not aware how Smove or other operators operated prior.)

A primer on Smove’s one-way model

If you've rented cars overseas, you would be familiar of the need to pay an additional fee when dropping off the car in a location that differs from your origin. The additional fee is to cover the cost needed to engage services, either in the form of a tow truck, or a driver, to return the car back to its original location. In the same vein, it is also costly for hourly-based car-sharing operators to allow returning the car to a different location. That is why most car-sharing operators shy away from offering one-way car sharing service.

Smove did it differently. When they first started as a mass-market car-sharing operator, while offering the option of a different drop-off location, they imposed a minimum booking duration of 3 hours in the original price plan, which costed $50. It comes with a minimum free mileage of 100km. This move not only ensures that their costs of having to ‘re-balance’ the cars across all their rental locations are better covered, imposing a 3-hour minimum usage period ensures that the frequency of rebalancing is manageable. Moreover, they also had a special plan whereby users can book a car from 9.30pm till 8:30am the next day for $50, further minimizing the need for rebalancing

In October 2018, they came out with a Super Short Rental plan. This plan allowed users to book Smove cars at a cheap rate of $1.25 per 15-minute blocks, for a maximum of 2 hours, with mileage charged separately - as long as the booking was made 3 hours in advance or less. The plan has some caveats though as not all locations can be chosen for drop-off; there are even times when users can only return to the same origin.

In a sense, Super Short Rental can be seen as a way to ‘offload’ some of the fleet rebalancing work to the users. Presumably, they had devised an algorithm that blocks destinations where there are too many cars, while ensuring that users do not take away cars that were already booked way in advance.

However, introducing Super Short Rentals may have inadvertently introduced complexities in the dynamics of Smove’s car-sharing scheme, as we will touch on later.

Costly operations of catering to pre-bookings

Smove’s primary business allows users to book cars many hours or even days in advance. This means that unlike BlueSG, they are committed to rebalance their fleet to ensure that all advanced bookings can be fulfilled.

While Super Short Rental may help to alleviate some of such rebalancing costs, there exists small but significant risks that can contribute to non-fulfillment of rebalancing the fleet. Examples being late returns, damage to cars, and cars returned with low fuel. In such cases, Smove would have to activate their own manpower to recover such non-fulfillments or other costs incurred for compensating these scenarios.

Smove has only 115 parking locations across the island. This is way lesser than BlueSG’s 339, and surprisingly even lesser than Tribecar’s 259 and CarClub’s 128, noting that both TribeCar and CarClub do not offer one-way car sharing service. Looking at the Smove vs. BlueSG coverage map (as shown below), it is clear that there are many areas that Smove did not cover. 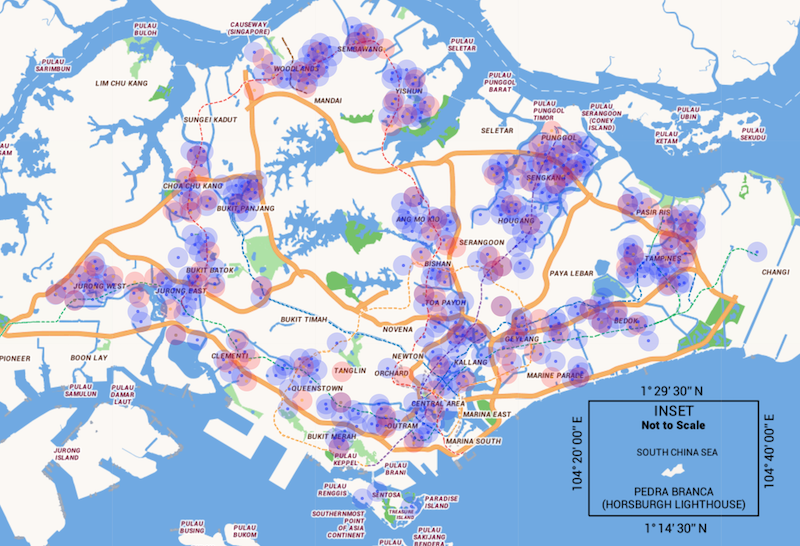 This has various impacts on the different types of customers that Smove caters for. Their original user base would be hard-pressed to find a station near their place, and even so, reachability and access will be a bigger issue; even BlueSG’s much larger portfolio of stations has reachability and access concerns, so Smove's smaller portfolio faces more pressure. The comparison gets worse if users intend to return to the same station, as users can also consider return-only car-sharing competitors within the vicinity. This meant that the potential customers they could capture were lesser than that of their competitors, and those that they could capture, typically have alternatives that they could consider.

The introduction of Super Short Rentals got Smove to capture customers that want to travel from point A to B directly. Catering such point-to-point (P2P) customers would mean that there is a greater need to have stations near offices and shopping districts. Looking at the map again, you can see that Smove has very few locations in such areas, with virtually zero in CBD core. It must be noted that they used to have a location in the then-Tanjong Pagar Center (now called Guoco Tower) - a prime location in the CBD - before Smove closed that parking location months ago.

Together with very limited car availability when booking via Super Short Rental, it is little wonder that even if Smove’s price plan seemed more attractive compared to BlueSG, users intending to commute to and from the office will still likely consider BlueSG. With the absolute number of stations in non-residential areas so low, Super Short Rental might not have been effective in serving as a rebalancing solution for their non-residential stations. 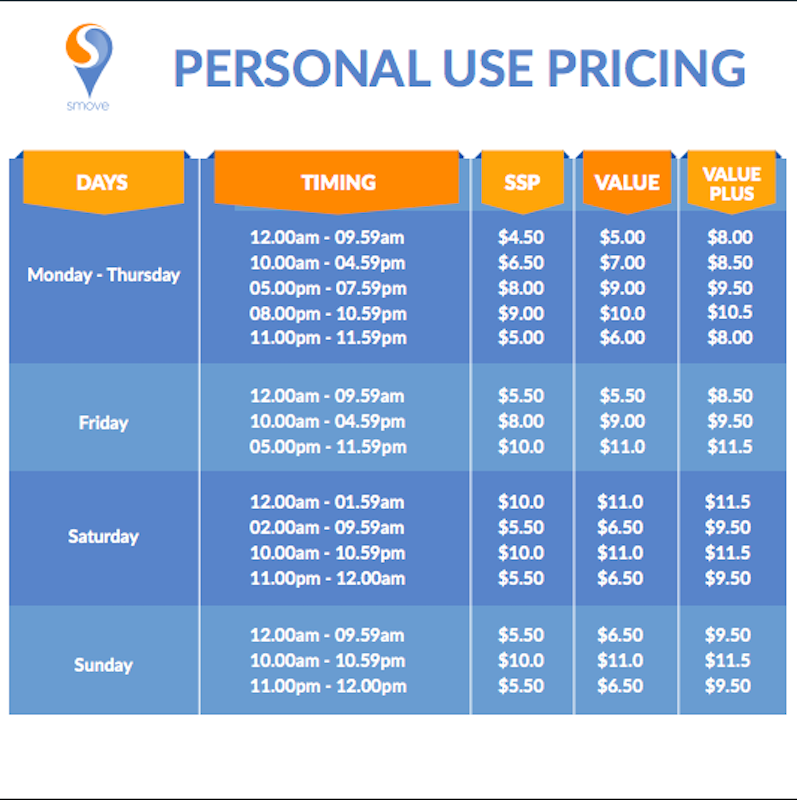 In this new price plan, the cost for rental varies across the time of the day and follows closely to the pricing structure of Tribecar’s Standard fleet. The new pricing structure applied to all bookings, including Super Short Rentals. Base price is amortized in blocks of 15 minutes. However, certain terms still apply: for ordinary bookings made way in advance, the rental duration must still be a minimum of 3 hours, whereas for Super Short Rental bookings made three hours in advance or less, there’s a maximum booking duration of 2 hours.

More importantly, there is no longer any free mileage bundled in any booking. In this new price plan, mileage was charged at $0.21/km for Saver, and $0.22/km for Value.

The implications of this new pricing structure:

Smove, you will be missed

It's a shock to myself and many others that Smove is liquidating. Even more shocking is that Smove seemed to be doing rather well in terms of booking volumes recently, and even more so during the circuit breaker period as I faced immense difficulty booking the car for Super Short Rentals during lunchtime and evenings.

While there is no official word on what exactly caused Smove to close, nevertheless, it can be seen that any operator taking on one-way car-sharing will have to undertake significant costs and operational complexities. While point-to-point car-sharing services have its fair share of success stories elsewhere in the globe (BlueCar in Los Angeles/Bordeaux/Lyon/Tourino, DriveNow in parts of Germany), it has also seen failures and closures (BlueCar in London, Paris, and Indianapolis, DriveNow in London, Brussels, Helsinki, and apparently Smove Sydney).

Meanwhile, I will miss driving the small but quaint Toyota Aqua that was previously part of Smove’s fleet - though there is still a chance of driving them again as some can now be found in Tribecar’s fleet. I will also miss the time whereby Smove offered BMWs for hourly rentals, and that parking in Changi Airport is fully covered when using the BMW. 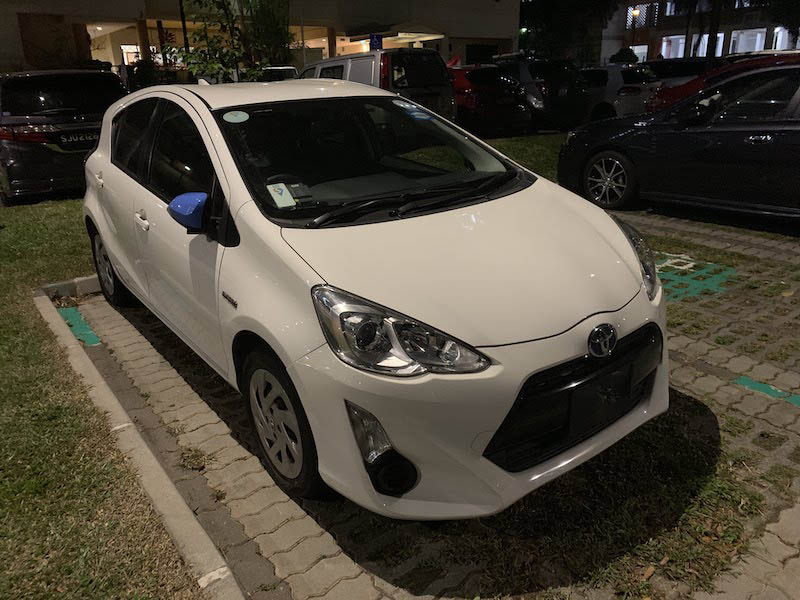