The Search for the One (Social Network)

Here's my confession: I'm a social media addict. At times, it comes close to an obsessive compulsive disorder, where there's an uncontrollable urge to refresh my Facebook and Twitter feeds within every five minutes to check the latest updates. At times, I find myself replying to updates on Twitter more than traditional messaging channels such as SMS.

So imagine what happened when Google+ went live. In no less than two days, invites to the social network created by the search giant was temporarily suspended due to the "insane demand" as quoted by Google's Vic Gundotra. Fortunately, a colleague stumbled upon an unofficial way to join Google+, and within the morning, the whole HardwareZone editorial team got into the action. 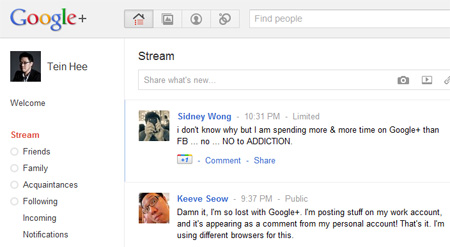 At first glance, Google+ bears a strong resemblance to Facebook. From its layout, to the way updates, photos and videos are posted onto the Google+ network, one wonders if it's a clone of Zuckerberg's social network.

That aside, what got me thinking was this: how am I supposed to manage Google+, on top of Twitter and Facebook. As of now, the sheer volume of updates that originate from the first two networks can be overwhelming. As mentioned previously, the real problem lies not with how many updates that comes in, but how one can post updates effectively, without going through multiple clients.

Even now, there's a need to differentiate your work and personal account. And that goes beyond specific clients or apps for specific social network accounts. To prevent any accidental (and at times embarrassing) updates on work accounts, it's common to adopt one specific web browser for all work-related accounts, while personal accounts are restricted to another account.

Fortunately, there's a wide variety of web browsers to choose from: Google Chrome, Mozilla Firefox, Safari, Opera, Microsoft Internet Explorer and perhaps some other relatively low-profile browsers. The point being: that's just way too many web browsers to be left on the background for too many social networks on different accounts.

And what of the mobility aspect of these social networks? Even now, we have Facebook and Twitter apps for the major mobile OSes such as Google Android, Apple iOS and Windows Phone 7. With the appearance of Google+, it stands to say that Google will attempt to conquer these mobile platforms with its own app. It's no surprise that Google+ has an app for Android devices. Unfortunately, the app is officially available only in the US. Officially, Google+ can still be used via its web app. Unofficially, there are ways to get the Android app (hint: Google for Google+ APK).

If you are going to update your life diligently on the web, it's going to take a lot more effort. And that is most likely what I'll be doing as I get used to Google+ over the weekend.

Till all social networks are one, the only worry I have is the possibility of developing a split personality from managing multiple social networks and accounts with different apps and web browsers.