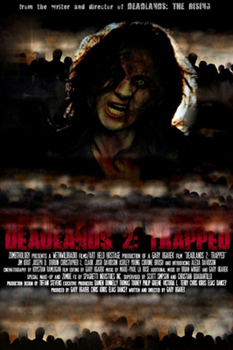 Cadaverous zombies or long-dead video formats. Which would you summon?

Back in March last year, WETNWILDRADIO films and Anthem Pictures issued a press release telling that Gary Ugarek's Deadlands 2: Trapped would soon make its way to the defunct HD-DVD format. Apparently, the zombie flick was scheduled for a HD-DVD release in October 2009 in "limited quantities". Wait, did I just speak of the dead? Why would anyone want to release a film on a redundant standard? Well, here's what the good man has to say.

"Over the last 18 months, since HD-DVD’s demise, I and small group of HD-DVD enthusiasts have scoured every part of the planet trying to obtain the left over releases of HD-DVD material. We were early adopters of the format and still felt to this day the format shouldn’t have been left to die off", says Ugarek.

Early adopter or not, perhaps Ugarek was trying to stay afloat by earning cheap accolades such as "The Last HD-DVD To Be Pressed" in order to sell his thing. Or maybe the fogeyish filmmaker refuses to believe the HD-DVD standard has well and truly departed. Even Toshiba, former champion of the HD-DVD cause, has finally succumbed to the Blu-ray invasion since.

“I know it’s a gamble with HD-DVD having lost out on the format war, but based on feedback from HD-DVD fans we expect this to be a huge moment for them, the film and HD-DVD. Kind of ironic that a zombie film would be helping HD-DVD try to come back from the dead, even if for a short period of time, but who knows, if the program is a success maybe other indie filmmakers and distributors can do something similar for the HD DVD fans and keep it alive for the hard core”, Ugarek declares.

Fast forward to the present, it appears that Mr Ugarek's hard-won resolve has finally caved in. Based on a statement published on ShootForTheHead.com, it is clear Ugarek has little choice but to pull the plug on his HD-DVD fantasies.

"WETNWILDRADIO FILMS is sad to announce that the Deadlands 2: Trapped HD DVD project has come to an end. The project which was passionately pursued for the last 6 months has hit one too many roadblocks, including US stampers backing out of the deal/process at the last minute to poor management of the project at ANTHEM PICTURES, the films US Distributor." - ShootForTheHead.com

What's truth and what's fiction? Anyhow, it's interesting to see Ugarek laying the blame on sticky red tape and his less-than-able distributor. Whatever his case is, I can't help but wonder how many of us actually have HD-DVD decks lying around in this day and age.

Enjoy the trailer, and note that viewer discretion is advised.