Quibi is a new video streaming service that showed up at CES, and I have so many questions 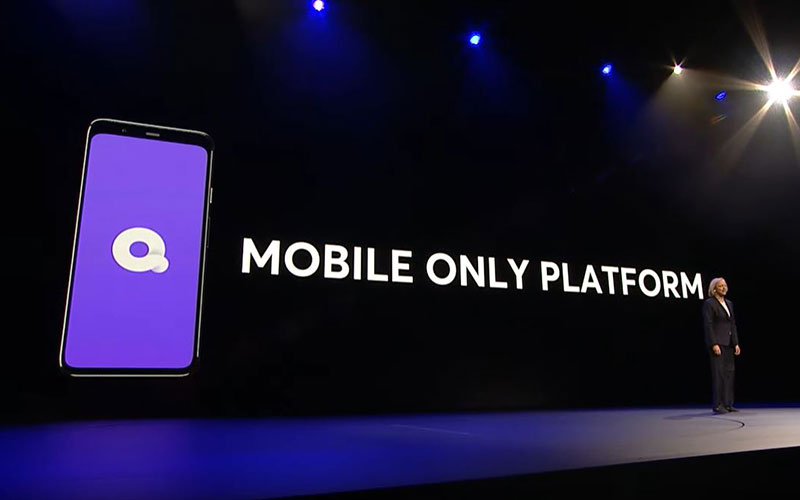 The world needs many things, but if there's one thing it doesn't need more of, it's another video streaming service. There's already Netflix, Disney+, Amazon Prime Video, and HBO Max, but now diving headfirst into the fray is Quibi. Quibi, short for "quick bites", is a mobile streaming service that made its debut at CES last week. It's got one interesting proposition though – while Netflix is trying to put its shows on every single device from your smartphone to TV, Quibi is resolutely focused on mobile. In fact, it revolves entirely around smartphones, hoping to use them to advance a new and novel form of storytelling that's unlike anything we have today.

At least, that's the pitch. At its CES keynote, Quibi presented itself as a unique service situated at the intersection between Silicon Valley and Hollywood, where creativity and technology meet.

Quibi isn't just any random startup though, and it's helmed by a couple of big names with extensive experience and success in their respective industries. Founder Jeffrey Katzenberg is a former Hollywood executive who has served as chairman of Walt Disney Studios. He's also co-founder and former CEO of DreamWorks, where he's the "K" in DreamWorks SKG. Yup, that's some seriously impressive pedigree right there. Meanwhile, CEO Meg Whitman has over 20 years in the tech industry and used to be CEO of HP and eBay.

Whitman represents the technology half of the equation, while Katzenberg brings all his Hollywood experience to the table. But how exactly is Quibi different from watching Netflix on your phone? It all centres around something called Turnstyle, a new engineering technique that allows viewers to switch seamlessly between portrait and landscape modes, each offering a unique perspective. This transition is instantaneous, and you don't get disrupted by things like black borders.

This is where I start to question what exactly Quibi is doing here. The idea behind this is that it gives film makers a lot more room to experiment. They'll upload two separate video files to Quibi, one portrait and one landscape, and viewers can switch between them as they please. Some people have already figured out pretty interesting ways to utilise this – an upcoming Quibi title called Wireless lets you view it normally in landscape mode, but when you switch to portrait, you get to see what the character is doing on their phone.

Then again, there are others that don't seem to do much other than just adjust the perspective for portrait or landscape, which is exactly what's happening in the GIF below. This is pretty lame if you ask me, and while the Wireless example does sound promising, many of Quibi's shows will need to employ similar tricks to make it seem worthwhile.

And then there's the question of how exactly people are going to receive this. Are they going to think it's gimmicky? More importantly, do you actually want to keep switching between portrait and landscape modes when watching a video? Despite successful interactive experiences like Bandersnatch, most people still view video as a mostly passive experience, and it seems a huge ask to expect people to actively work to catch the show in its entirety. Furthermore, if there are two distinct video streams as in the case of Wireless, do I have to watch the entire movie twice to see the whole thing?

Quibi will also be able to leverage more than just the phone's orientation. After Dark, another Quibi show, will use viewer's locations to determine when they can watch the show and only allow it after sunset. Certain video games already do this though, and it doesn't seem like it'll be long before the novelty wears off. At the end of the day, many of Quibi's features, including the potential to use GPS, haptics, or your phone's messaging system, sound like the kind of things that generate a lot of buzz when you first hear about it, but which turn out to be a lot less impressive when real people start using it.

Nevertheless, plenty of Hollywood royalty is getting behind Quibi, enough to make you go starry-eyed. The streaming service has already raised a stunning US$1 billion, thanks to the A-lister roster that will roll out content when it launches on 6 April. Directors like Steven Spielberg, Guillermo del Toro, and Sam Raimi are already onboard, as are actors like Jennifer Lopez, Bill Murray, Emily Mortimer, and Kevin Hart. Here's a funny thought: Katzenberg says Quibi represents the "third generation of film narrative", but it's still tapping established filmmakers who, despite their storied record, are hardly part of a new generation of anything.

The main point seems to be that Quibi is banking on sky high production values and star power to get people to sign up. "[YouTube] is the most ubiquitous, democratised, incredibly creative platform," says Whitman. "But they make content for hundreds of dollars a minute. We make it for $100,000 a minute. It’s a whole different level – it’s Hollywood-quality content." Quibi is drawing a hard line between it and other user-generated video services like YouTube and TikTok, which is fair, but it also seems to be taking it as a given that so-called "Hollywood-quality" content is automatically of a higher calibre. I suppose that will be true in the visual effects department, but there's so much more than that that goes into crafting compelling stories.

As Katzenberg describes it, Quibi is about bringing the traditional ecosystem of broadcast, cable, streaming, television and television storytelling into the new decade. Unfortunately, it doesn't sound quite as cutting-edge when he says it like that. One could even argue that there are fundamental incompatibilities between big budget productions and tiny mobile screens. After all, didn't Martin Scorsese implore audiences not to watch The Irishman on their phones? "I would suggest,” said Scorsese, “if you ever want to see one of my pictures, or most films – please, please don’t look at it on a phone, please. An iPad, a big iPad, maybe."

To be fair, Quibi shows will be produced specifically for mobile, but it remains to be seen how well that will play out in practice.

There will be three types of content on Quibi – Daily Essentials for news summaries, things like documentaries and food shows, and movies. But Quibi doesn't even plan to deliver its movies the way regular people watch them, that is, in a single 2-hour sitting. Instead, it will release them in short minutes-long chapters, each pushed out to consumers every day. I mean, really? Presumably, the narratives will be structured to fit these 10-minute chapters, but it still sounds like a really risky endeavour to me.

Netflix introduced the concept of dropping an entire season at once, and people have gone to town bingeing multiple episodes in a single go. I love not having to wait for the next episode, and I think many others would concur. However, Quibi has decided it's going to give the idea of bingeing the finger and stick to short chapters instead. Imagine this – you'll need to wait 12 days and watch 12 chapters to finish a 2-hour movie.

I could end up eating my words though. Maybe people will love this shorter format. After all, people spend all their time on their phones these days, and given all the talk about short attention spans, maybe 10-minute movie chapters are exactly what our brains want. Or maybe they're not, and people will end up saving the chapters to binge over longer periods.

I guess we'll have to wait till launch day to see how viewers take to it. Quibi will cost US$5/month for the ad-supported version. If you want to go ad-free, the price goes up to US$8. At the very least, Google and T-Mobile have already bought an entire first year's worth of ads, worth US$150 million. Maybe, just maybe, Quibi could be what entertainment will look like as we flip-flop our way into an even more mobile-centric future.