By now, there should be a reasonable number of folks in Singapore whose homes have optical fibre installed for internet and even some lucky folks already enjoying the speedy down/up-links. There are however many more folks like myself who haven't yet had OpenNet install the fibre line and termination box. Finally, my turn came about yesterday.

While I should be happy, I would have been even happier had I gotten an appointment a couple of months earlier so that the fibre optic cable could have been hidden away and integrated within my home renovation work scope.

OpenNet staff who would be installing the line within your home, are trained for only this sole purpose. If you would like to hide the fibre cable away as part of your home's design, you would have to get your own contractor to liaise with OpenNet staff to do it concurrently - this is all mentioned in the guide book of course.

Alas, after several agonizing months of my home renovation that just ended, I was in no mood of neatly concealing the cables. Fortunately, I noticed the trunking that the OpenNet staff brought over was smaller than usual. As such, it would be less obvious and unsightly than you would expect it to be. 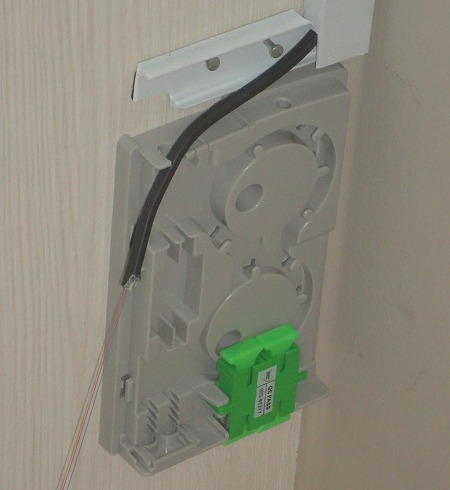 So where's the best spot to keep the fibre optic termination box? This will depend quite a bit from home to home. The guidebook recommends having it in the same spot as your cable TV termination box, which is typically near power points.

Like the cable termination box, the fibre termination box doesn't require any power and it's just place holder within your home where the fibre cable ends with end-user connectivity to your service provider's modem or set-top. While fibre is currently used for internet connectivity only, this doesn't mean the termination box should be located where the study room or wherever your PC/notebook is located. These rooms run deep in your house and can chalk up either more cabling cost or more unsightly trunking. In the worst case - both.

Since the living room is typically the closest to your main door - the entry point where the cable is drilled through - we suggest that the fibre termination box takes a spot closest to a power point in the hall where you would expect your service provider's fibre optic based modem to be located. Here's why:-

It is probably most optimum if you can house the termination box near your TV console area in the hall where you're likely to have more power points, and perhaps even an existing network infrastructure if you had planned such.

Also, internet based services for TVs and set-top boxes are going to spike what with Google TV and other such services and experiences that are being conjured by several big names in the tech and media industry. Fast internet connection is a must if one is interested to dabble in these new services and that's probably what optical fibre will enable in this performance hop.

So I touched upon quite a bit on considerations for placing the termination box and I had mine placed near my TV console; more accurately, behind my home theatre's front left speaker. Why not in my TV console itself? Well, I didn't require more trunking and cable disruptions and hence stopped short at that. It's a reasonable trade-off for me in terms of location vs. appearances vs. effort. 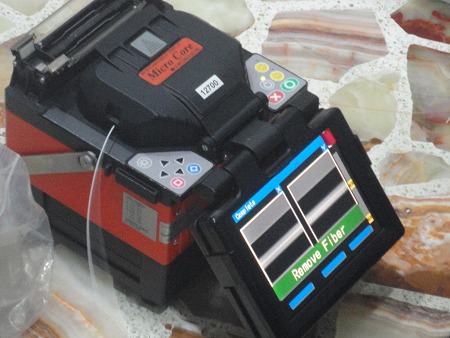 One other interesting point I found from the installation workers is that the fibre termination box itself is designed with redundancy in mind as it has two output ports, of which only one will be active. Should the cable go faulty in the future, OpenNet is probably going to run a new cable through your house and use the second output of the termination box. Well, it's a faster solution than removing the existing line. However, this also means this action is easier to perform for those who didn't conceal the fibre line/trunking within your home decor/renovation.

So do give the accessibility of servicing the fibre optic line a thought before dictating your installation preference. In the end, my decision to go with a non-concealed and hardly obtrusive default trunking seems like a decent choice after all for a quick fix.

However, there are fancier choices such as getting your own flat fibre ribbon cables and then getting the workers to install these to the termination box. More work and shopping of course, but that's the same with any home purchase, isn't it?

And as for the installtion experience from start to end, it was an uneventful event that lasted a little over an hour. As long as you've clearly expressed to the workers on your routing preference, they'll take it from there. Now it's time for me to wait for my old internet contract to expire before I make the jump to internet on optical fibre.