In 2001, then CEO of Microsoft, Bill Gates unveiled a new product that ran on Windows XP Tablet PC Edition. He predicted that it would change the way the world uses personal computers and in a sense, he was right. Except the tablet PC he had in mind came with a stylus for writing down notes, you know, the way serious people work.

Throughout the years, there were a great number of convertible tablet PCs that act as laptops first, and tablets second. They were somewhat successful in the niche they were targeting -- enterprise users who have no (or at least not much) limits on budget. These people were high-flying executives or doctors who need to scribble on their machines, yet have the option of using it as a regular laptop and don’t mind paying for it. Then there were the content creators who want to have a stylus for fast, accurate editing of their image files, or PDF files.

The hardware on which the tablets were running on were also decked out with the latest hardware specs available at the time, and were capable of running a full-blown copy of Windows. The concept was fairly attractive to some, but the idea just didn’t take off with the masses. Why?

The trouble with this scenario was because the hardware wasn’t good enough to run Windows seamlessly without any wait times or lag. You’d have to wait for Windows to start before you can scribble anything. Battery life was also horrendous, meaning once you turn the machine on, you have a specific time frame in which you need to finish doing whatever it is you need to do (rat race?). The market for tablet PCs was so minuscule that overhauling the Windows OS just for niche users didn’t make economic sense.

Using touch and pen input on plain old Windows was just too cumbersome for most people to appreciate. Add to that the ridiculous weight and price of the tablet computers, and it made scribbling on plain old paper notepads just seem that much more attractive.

Microsoft however it seemed, held a soft spot for these tablet PCs. In early 2010, before the iPad -- itself a product of a failed predecessor, the Apple Newton MessagePad -- was launched, the world caught a whiff of what was known as the Microsoft Courier.

One Step Forward, Two Steps Back

The premise of the MS Courier was simple. It was a digital notebook, thin and light enough to be carried around. It supported seamless touch and pen input, featured dual screens and has what was intriguingly known as the “Infinite Journal”. The “Infinite Journal” was basically a journal that went on forever until your memory ran out, exactly what Bill Gates had in mind.

It showcased exciting possibilities on what could potentially be done on a multimedia tablet, but unfortunately, the project had been shelved for reasons unknown. It was the dream tablet of many people out there, but Microsoft somehow felt that the time wasn’t right for the Courier to be unleashed on the world.

And so we’re back to using Windows 7 as an OS for enterprise tablets today. Microsoft claimed that it was touch optimised, but honestly, using pen and touch on Windows 7 is still far from ideal. The main selling point of Windows 7 tablets is that they can run any program that is made for Windows. Meaning a Win 7 tablet can fit into a corporate environment immediately out of the box. While that is nice, what we really want is software made exclusively for pen and touch.

As of now, the only mass consumer software that benefits tremendously from Windows tablets are content creation software like Photoshop and Illustrator. But even then designers just plain prefer using Macs to Windows because they won’t have to deal with software issues.

While there are some writing features baked into Win 7, like handwriting recognition, it just isn’t up to par because it introduces more mistakes than convenience. The most you can do with a pen now is to scribble, draw and just add digital signatures, not very important features for dropping a premium on.

Is This Where Microsoft Tablets Are Heading?

Recently we were invited to the launch of a new tablet by Fujitsu, who had been one of the pioneer manufacturers that popularised the convertible tablet form factor. The tablet in question is called the Stylistic Q550. Although it was running the bulky Windows 7, the OS was running off a very fast SSD (32GB or 60GB), negating most of the issues with running a full fledged OS. 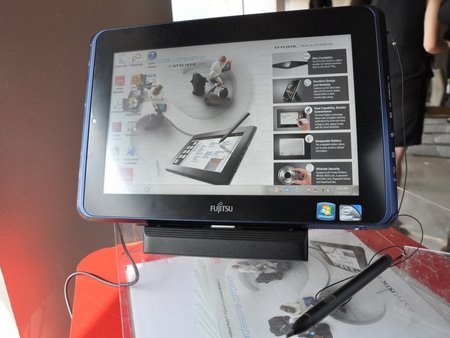 In terms of security features, it has an integrated fingerprint sensor, smartcard reader and an FDE SSD, just to name a few. For content creation you have Nuance’s T9 Trace, Write and XT9 to build upon Windows 7’s basic pen and touch aspects. But price wise (S$1788), even for an abundance of features, is still hard to swallow. 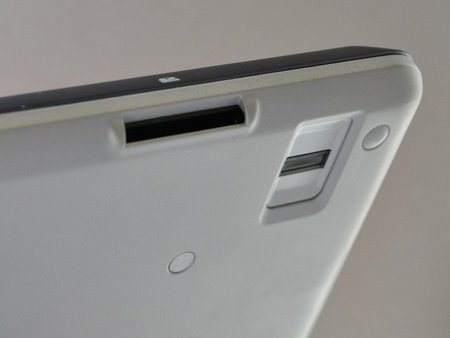 While Microsoft may be trying its best to shoehorn Windows 7 (the weakest link now in the tablet PC market) into tablets, it’s still not good enough in terms of user friendliness. They seemed to have realised that they’re trailing behind in the tablet sub-genre of personal computing they championed since the beginning, and is now hard at work on Windows 8.

The Strongest Attempt Yet

This new version of Windows seemed to have been inspired by the very beautiful tiled interface of Windows Phone 7. It promises seamless touch support (pen support not reported -- yet) and powerful multi-tasking abilities but the caveat here is that developers may need to build optimized software from the ground up to fit into the Windows 8 environment.

While it may mean that software won’t immediately be available for Windows 8, it also means that traditional Windows software developers will be able to create software that are custom made for touch (and hopefully pen) interfaces. And ultimately it is the success of these software that will make or break Windows 8 -- a full fledged desktop, laptop and tablet OS.

Watching the tablet space, the latest battleground for the big three IT companies, is getting more interesting. With Apple leading the tablet charge, with its impressive iPad and iPad 2 sales figures, how will the introduction of a full operating system running on a tablet change the game? Will it even have any impact? What would such a move mean for the future of the laptop form factor that we are accustomed to? Be sure to check out www.hardwarezone.com.sg regularly the answers and for the latest developments.

Boon Yeow's personal tech buying guide = aim for the top, go a notch down. Chances are you will end up with the product that will stay relevant for the next couple of years.