The Last Stretch in Pre-Sleep Device Usage in the Bedroom

When I finally bought a Smart 3D LED TV in early September 2011 and placed it in my bedroom, I realized that prior to going to sleep, there exists four pockets of visually accessible devices within the four walls alone that demanded my 2-3 hours of pre-sleep attention. Among some tech circles, the term 'lean back devices' often comes to mind. If you're like me, and you have a TV, notebook, tablet device (or e-book reader) and smartphone within the confines of your bedroom, how or in what order of preference do you use them within that short span of time? Do you turn them on all at the same time, a few at a time, or just pay attention to one major device but leave the rest on as background noise (or in standby mode)?

It makes you wonder if a paperback novel has any chance of being squeezed in the equation anymore.

On some days, the TV might take precedence, as you spend 2-3 hours of your pre-sleep time on a 3D movie or TV program (highest likelihood during weekend nights, if you're not out). While doing so, you can balance that out with the TV's smart features (basically a TV that is connected to the Internet) to check on news, updates or access Facebook or Twitter within its social media channels. Today's social media features on smart TVs are still very basic and access is limited, but they beat having to refer to your other screens in-between an action-packed scene or news broadcast.

Yet, the smart TV I've bought actually comes with a 5-inch Android-based Wi-Fi remote that allows me to view what is shown on the TV screen on the remote screen, with the option to listen to the programs on a pair of earphones and mute the main TV volume down (these features work via a downloadable app). Of course, there is still the perceptible lag in audio sync between the main TV image and the Wi-Fi-ed audio, but it works if you want to keep viewing quiet late at night.

The decision to purchase a Smart TV didn't come as a spur of the moment thing either. The fact that it has stereoscopic 3D features was a deliberate choice of mine, as I scoured the scene and realized that 3D Blu-ray content is on the rise (and being released fast). Not to mention that paying so much for 3D movie ticket prices, only to be sorely disappointed by the conversion results in-movie, made me realize that it just isn't worth my while in the long run. At least with a 3D TV at home, you have the option to view the movie theatrically in 2D, then opt for a 3D Blu-ray version at a later stage (if it's any good as a collectible item). Some 3D Blu-ray movies worth collecting (and showing off) include Monsters vs. Aliens, AVATAR,  Tron: Legacy, Drive Angry and IMAX Deep Sea 3D (narrated by Johnny Depp and Kate Winslet). There's a slew of 3D content which are on their way, and they include Werner Herzog's Cave of Forgotten Dreams and a modern dance documentary on Pina Bausch called Pina, not to mention mature content (if you're into those).

Of course, there is also the argument on whether an active shutter-based 3D TV or a passive polarized-based 3D TV is better. It really depends on the user's comfort level (ie. do you want 1080p on each eye, or you just want a lighter pair of 3D glasses), your regular audience (are you mainly the only viewer or do you normally have like a crowd of 5-7 people watching with you), and the size of the TV you intend to watch your 3D content on (the general rule of thumb, at least among AV forumers, is that you should go active if your screen size is 46" and up, but know the pros and cons of each first before taking the plunge). 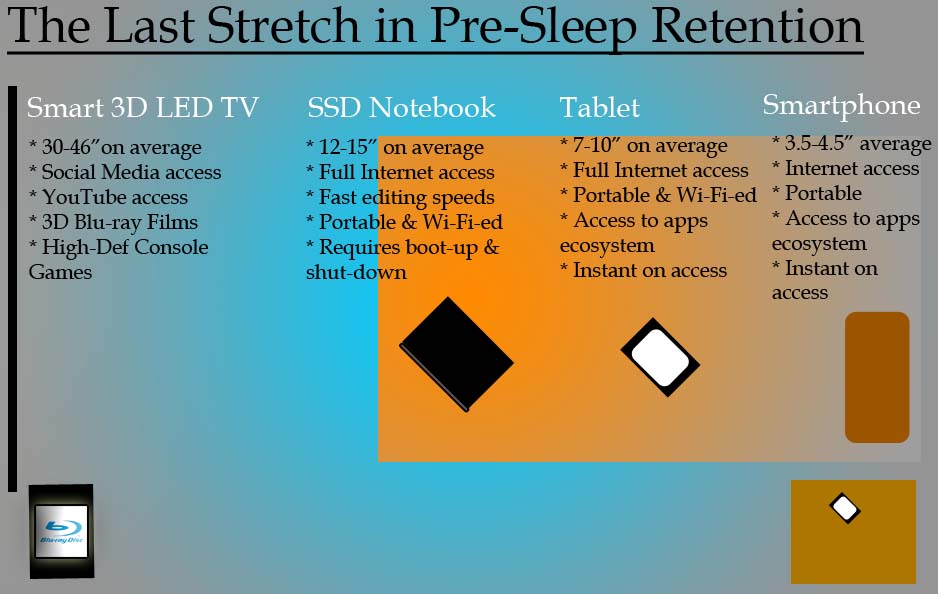 Still, as the image I've made above illustrates, 3D TV or smart TV features are just part of what I could call the Last Stretch (as opposed to the Last Mile). The TV, being the first among the four, sits at the farthest end, or wall, of your bedroom. Despite its smart and 3D features, TVs are generally still informational, distant and one-way (contributing to social media channels via a smart TV is still very tedious but I do see improvements in the latest iterations). Personally, among the four Last Stretch devices, it seems to be the one item with the biggest potential for growth as the software is still in its infancy and update changes happen magically on a larger screen.

Then of course, you have your notebook, which today, if you're not on a Solid State Disc-based (SSD) storage system, my advice is that you should. Not only are the new Core i7s and i5s notebooks lighter and faster, they are also the only Last Stretch device with a proper keyboard. This basically covers the MMORPG users, pre-sleep productivity workers and first-person shooter (FPS) gamers. If you're a video editor or you need full access to your Facebook privacy settings when posting photos, etc., then the notebook is where you'll be prior to sleep. Fortunately, I'm a Spotify online music streaming user and access on a desktop/notebook is free (there's a US$9.99 subscription for mobile/tablet access and limited to US/Europe users for now), so deciding the right device to stream your personalized music within the confines of your room is a no-brainer. The notebook is however plugged in to your electrical outlet (as most in-home usage normally would be, particularly if you're paranoid) and you should maintain proper posture when using it over prolonged periods.

The notebook also serves as the alternative desktop device, being the only Last Stretch option for a full Windows-, Linux- or Mac OS-based machine running in your bedroom. It is also the only device you'd rely on if you are leaving it to download a large file overnight while you sleep (I know a few of you who do).

Farther down the stretch, you'll come to your tablet device. The tablet is probably the larger sibling of the smartphone -- the only probable exception is that it may not be able to make phone calls, WhatsApping or send SMSes. If both the tablet and smartphone share the same OS ecosystem, then you'd probably pick one for access during pre-sleep -- normally the larger screened tablet. A huge percentage of users are on their tablets in the evening, as this new data research shows, so for now at least, the tablet rules the pre-sleep throne, or bed. In fact, tablet devices today are so powerful that they support high-definition games like id Software's RAGE HD and Animata's Machinarium. In fact, it's become extremely easy to play co-op multi-player games like Dungeon Hunter 2 HD with friends on a tablet device.

Within this device ecosystem, peripheral makers will have to determine how different pre-sleep users behave or use their devices in different ways and means. For instance, I was using a storage-based media player for my TV, but when the remote broke down, I was deciding between the Logitech Harmony remote or an infrared-based accessory that would convert the tablet or smartphone into a remote system that works with the media player. You can save some money if you know what peripherals work best within your pre-sleep zone. Some of you might not even have a TV or notebook in your pre-sleep zone, but choose to use a tablet with a Bluetooth keyboard instead, or use it as an alternative online streaming TV or gaming device.

Among tech vendors and consumers at least, there's been a lot of talk on living room devices, mobile devices, smart kitchen appliances and car navigation devices over the years, but personally for me, pre-sleep devices hold an endearing influence on how I prioritize my personal content consumption to end off my day on a good note. Whether it's a 3D TV experience, editing a HD video or posting a Facebook comment on my notebook, playing a HD game on my tablet or just WhatsApp-ing on my smartphone, there is no denying that the Last Stretch in pre-sleep retention is an important element that'll linger in our subconscious long after we switch them off and go to sleep.

Terence Ang used to be the Supervising Editor for the New Media division in Singapore, where he worked with the editorial teams behind HardwareZone.com and HWM the magazine. In that role, he looked at ways the teams in Singapore can collaborate with the Editors in Malaysia, Philippines, Indonesia and Thailand. Terence is currently the Product Manager but contributes to the blog section whenever he can (or finds something interesting to talk about).