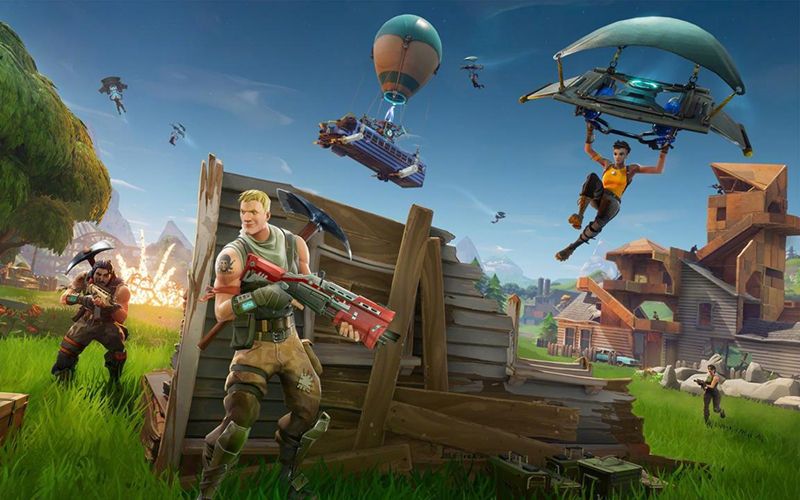 I had many things to do on Wednesday night. Errands to run, work to finish, and friends to catch up with. But the first thing I did when I got home was to log onto Fortnite and buy a skin that was basically a fish in a space suit.

After all, what are priorities for if you don’t get them in order?

Fortnite is Epic Games’ free-to-play battle royale shooter, and it’s all anyone – assuming they’re a gamer – can talk about now. What’s crazy is that this is only a slight exaggeration on my part. At the time of writing, a quick look on Twitch shows that the game currently has the most number of viewers at just under 100,000, topping more established titles like League of Legends and even Overwatch.

But today is just an ordinary day. Fortnite has shattered records and propelled niche platforms like Twitch and Discord into the limelight. In February, the game hit a record of 3.4 million concurrent players, beating its spiritual predecessor PlayerUnknown’s Battlegrounds’  high of 3.2 million. Its overall player base has also reportedly surpassed 45 million, an impressive number.

Later on in March, Tyler “Ninja” Blevins, a former Halo pro turned Twitch streamer, drew in a record 635,000 concurrent viewers. Ninja was playing with none other than Drake, and all of a sudden Fortnite seemed like a thing everyone, even non-gamers, could get on board with.

And when even professional sports players are celebrating with dances and moves lifted from Fortnite, you know something’s up.

But what’s the secret behind Fortnite’s success? And more importantly, why can’t I stop spending money on the game?

In the two weeks since I’ve started playing the game more regularly, I’ve bought a stupid amount of in-game cosmetics. A mustached tomato head. A triceratops suit with a baby triceratops as a backpack, barely half out of its egg (so basically, two triceratopses). A fancy Sun Wukong skin. A t-rex onesie. And of course, my personal favorite, an angry-looking fish in a space suit. Somebody help me, because one skin also costs around US$20.

I haven’t even gotten to the pickaxes and gliders. Right now, I’m wielding a pickaxe with a menacing dinosaur head as a blade. Its serrated teeth glint in the setting sun, and it’s a trophy from the dangerous beast I’ve slain.

Actually, no. It’s a plasticky head that bobs about when I run, while its jaws snap open and close in the most inane manner possible. I love everything about it. In the meantime I also have my eye on the Pick Squeak, a squeaky toy version of the pickaxe that, yes, squeaks whenever you harvest building materials with it.

Fortnite is like a goofy playground that lets you run, frolic, and build all over it. The only downer is that the other kids are trying to kill you and your friends (why do they have to be so mean?). But hey, it’s okay, because you can blow them up with a rocket, pick off their heads with a sniper rifle, or just shotgun them in the face.

Season 4 also adds something called Hop Rocks, a new consumable that lets you defy gravity and bounce around like a bunny on steroids. There’s no real point to this, although it can definitely be used to your advantage, and it’s all part of Fortnite’s carnival-like atmosphere.

I’ll have to admit that I wasn’t a fan of the game at first. I didn’t really enjoy the battle royale mode, and I still feel more comfortable with team-based shooters where your aim matters more than how fast you can build.

But Fortnite’s light-hearted aesthetic is difficult to resist. It’s also so, so stupid, which arguably plays a huge part in how fun it is. Even when you lose – which for most of us, will be over 90 percent of the time – you’re still having a good time and raring to go for more. After all, when you’re killed by a pink rabbit wearing a hockey mask, it’s difficult to get mad.

Furthermore, there’s just something about Fortnite that feels more accessible, even for players who don’t usually gravitate toward shooters. Despite its high skill ceiling and fairly demanding game mechanics (becoming a good builder is really hard), the game has a whimsical quality and a degree of anarchy that makes new players feel welcome.

The ability to build wild misshapen structures, and immediately conjure some cover for yourself when you're caught out in a bad spot, is a novel new mechanic that no other shooter has. Being outgunned is something that happens in every other FPS game, but in Fortnite, winning build battles is actually a thing.

Oh, and I can do the dab dance while you're crawling about on the ground before I finish you off. This also isn’t Overwatch where there’s a “meta” everyone seems to expect you to follow, and where you’ll run into uncooperative players who simply refuse to work with the team.

Fortnite is more forgiving to different play styles. If you’re confident and eager for a fight, you can push aggressively and seek out other players. But if you’d rather sneak along the peripheries of populated areas and let other players take each other out first, you’re free to do that as well.

I consider myself a fairly competitive person. Every game that I lose sends me closer to the edge until I become a quietly simmering, bristling ball of rage (I’m still surprised I haven’t been banned from Overwatch). But somehow Fortnite makes me okay with sustained failure, and I have no problem with parachuting headfirst into almost certain defeat.

It’s all fun and games in Fortnite, and in the meantime, I’ll be staking out the in-game store for the Battle Hound skin.