Weekend Drives: Hyundai Tucson Hybrid – A gem of an SUV

Note: This article was first published on 21 January 2022. 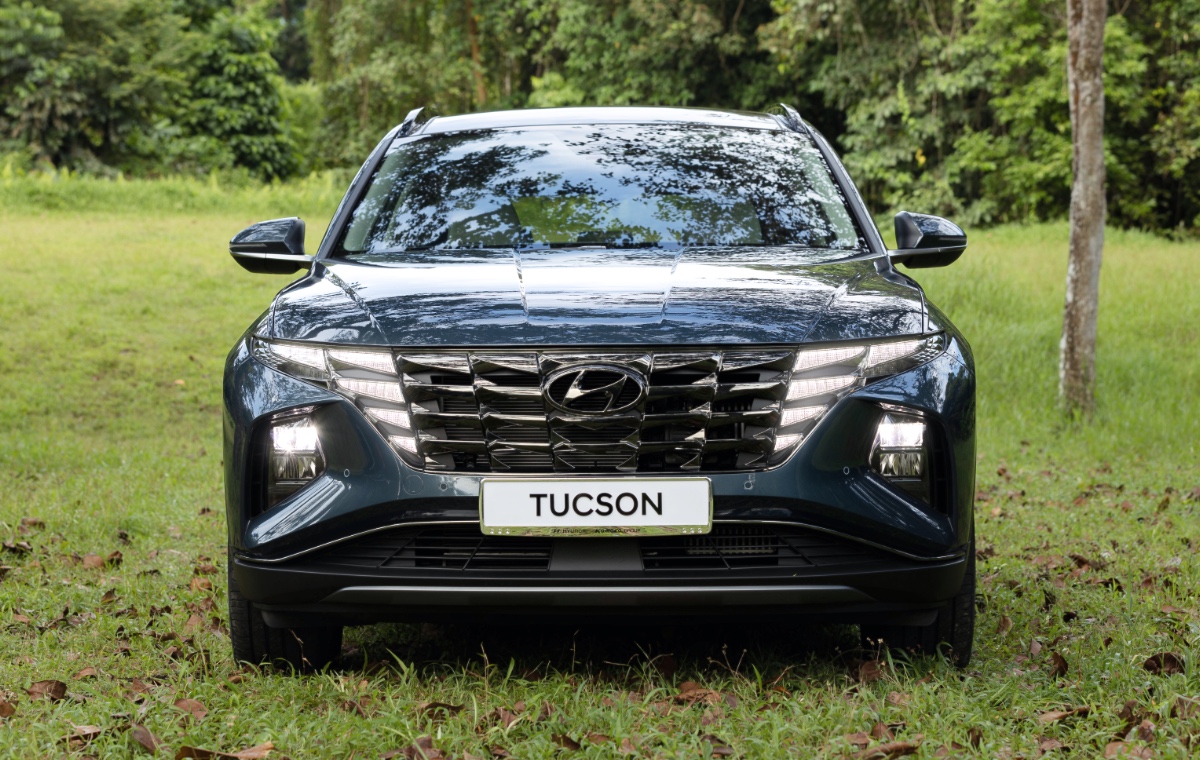 Anyone who still dismisses cars from Hyundai simply because they are Korean should be prescribed a drive in the new Tucson Hybrid. Much like the rapid ascent of Korean entertainment (think BTS and Squid Game), Hyundai is now very much a leading player in the auto industry, and its new Tucson Hybrid proves that it deserves this status.

Alright, the design might not be everyone’s taste but there’s no denying that it looks distinctive, which I reckon is a desirable trait given the current deluge of mid-sized SUVs in the market.

Hyundai is really proud of the headlamps. They are dubbed Parametric Hidden Lights. What’s “parametric” about them? I have no idea. But the hidden lights part I do get because when the car isn’t running and the lights are off, it’s hard to tell the headlamps are there at all. The grille design itself is very aggressive and so is the rest of the car. The bonnet has creases, the fenders flare prominently, and the wheels resemble shurikens. You either love or hate the way this car looks. I like it. 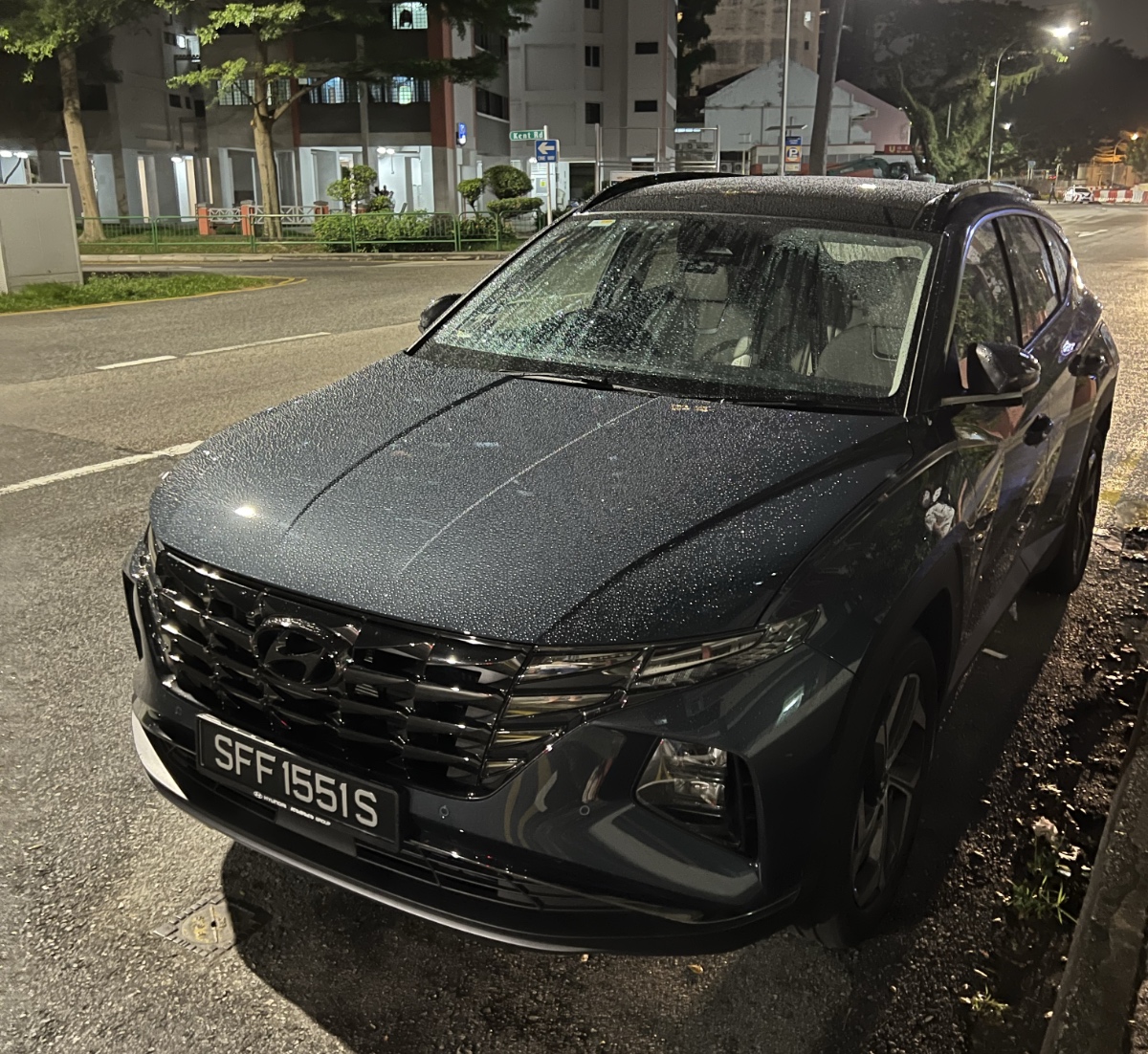 The interior, however, I’m sure most people will love. It feels expensive and looks modern.  There’s no traditional cowl for an instrument cluster. In its place is a 10.25-inch digital display. Fears about being unable to see the display because there’s no cowl are unfounded because the display is bright and the anti-glare coating is effective.

To be fair, it does look like Hyundai has stuck a tablet to the dash but its effectiveness is irrefutable because coupled with the high ride height and the lack of a cowl obstructing your sight, it means you get an impervious front view. And like most digital displays, it’s customisable – though I found that by default it already has all the crucial information that I need. 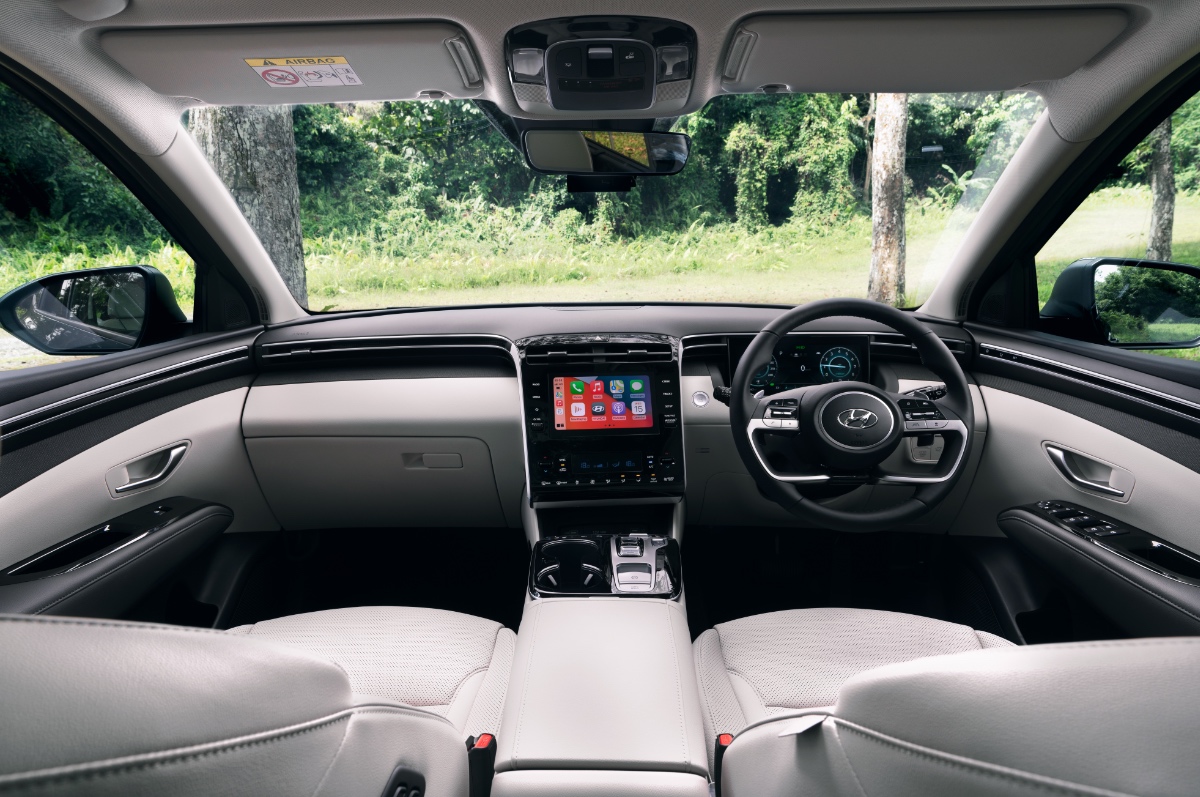 The next thing most people will probably notice is the large swathe that runs across the entire dashboard. The swathe actually contains vents for the “Multi-Air Mode” which infuses the cabin with cold air. Sceptics would probably think it’s a gimmick and I admit I thought so too at first. However, I found that a benefit to this mode is that it reduces wind noise and ensures a more even distribution of cold air around the front of the cabin. Happily, it isn’t something that’s there just to fluff up the features list.

Some people complain about the use of buttons to select drive modes, but I found them to work great. They are big and distinctive enough that I could operate them from muscle memory after just a day so. 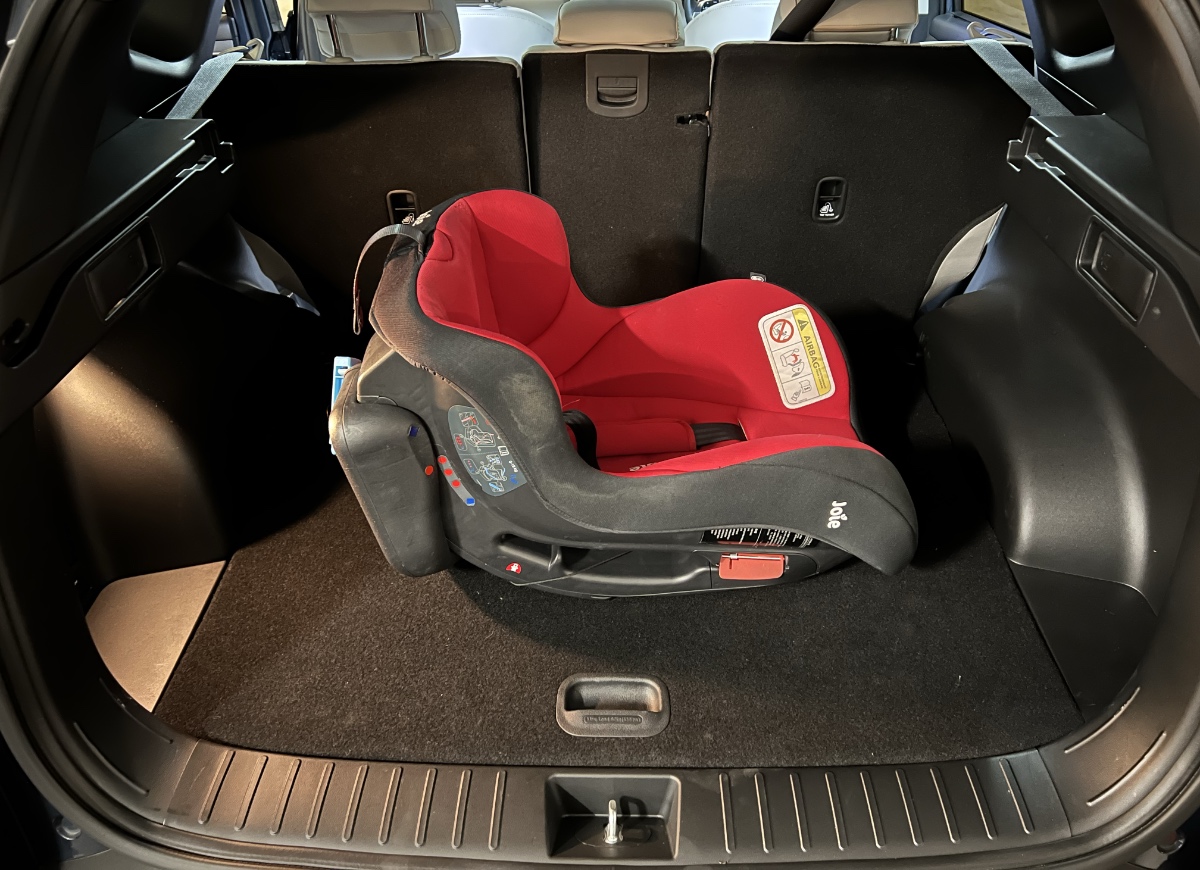 The front driver and passenger seats are ventilated too – a real boon in our torturous climate. The rear bench has good leg and headroom. It also splits and folds 40/20/40 giving greater flexibility for lugging around cumbersome objects. On the subject of large objects, the rear boot measures 620 litres and will easily swallow common large items like strollers, baby seats, and golf bags. Also worth mentioning is that the rear seats recline too, so passengers in the back can get comfortable. There are also two USB ports underneath the rear passenger aircon vents. 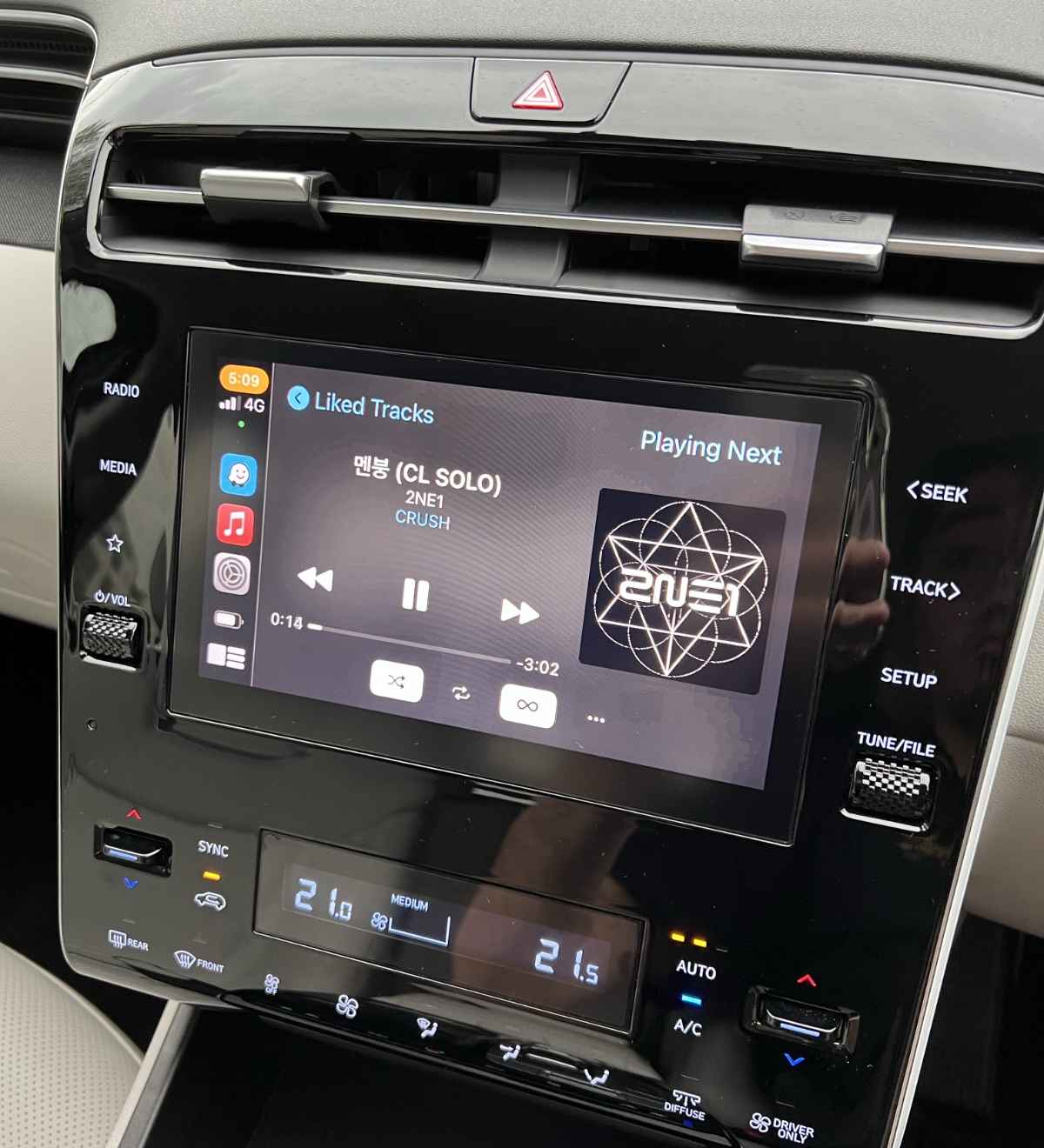 The infotainment system is good. There is support for wireless Apple CarPlay and Android Auto, of course, and there’s a wireless charging pad at the base of the centre console for your phone. The system’s screen is 8-inches, which is perhaps a little small, and the rather significant bezels around it are my only gripe about its interior. It’s the lone reminder that there is perhaps still some cost-cutting at work here.

The hybrid powertrain puts up respectable numbers. Combined, the 1.6-litre turbocharged in-line four and electric motor put up 230hp and 265nm of torque. And even though the six-speed auto box isn’t the quickest shifting and the car itself isn’t exactly a featherweight (around 1600kg), the Tucson Hybrid always feel zippy when you put your foot down. Hyundai’s claim of 8 seconds from 0 to 100km/h feels entirely reasonable and believable to me. 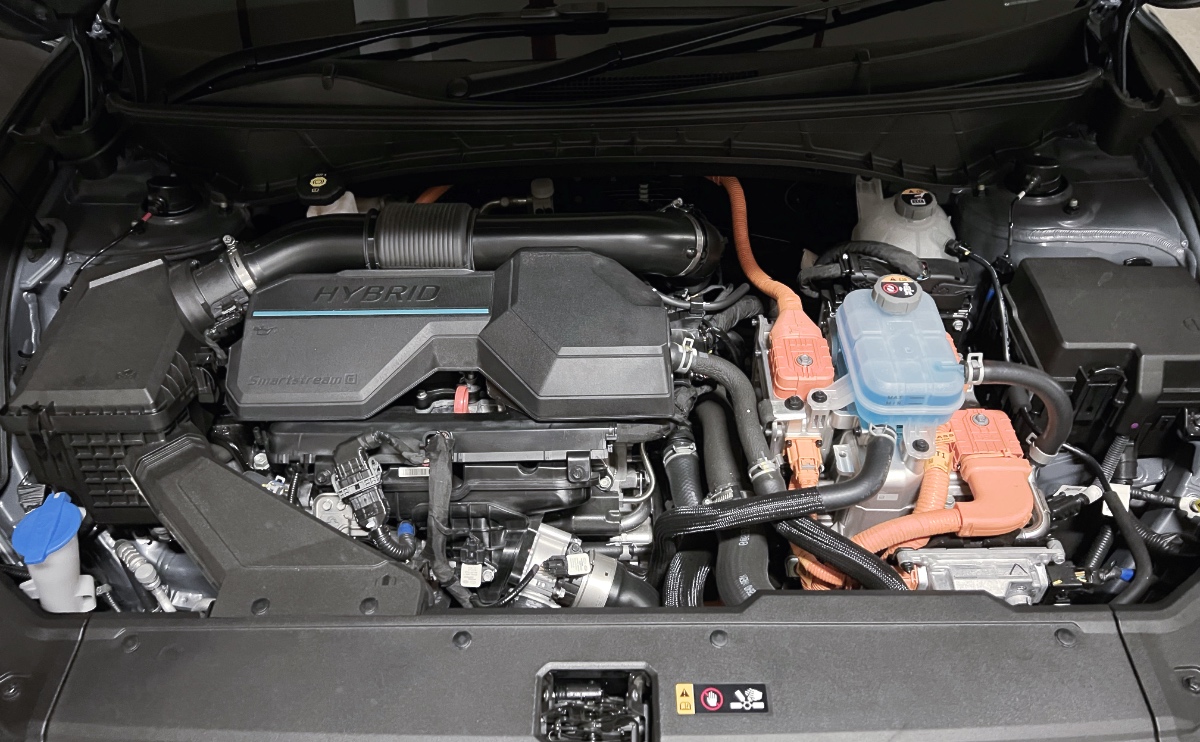 What’s more impressive, however, is how seamlessly it switches between modes. The engine mostly only comes on when you need more power than the electric motor can deliver (or when the battery is out of juice) and it always does so smoothly and quietly. Unless you pin the throttle and bring it close to its redline, it’s hard to tell the engine is running at all. On highways, if you feather the throttle, it can operate using the electric motor alone, which helps with fuel economy.

I managed 6.8l/100km which is equivalent to 14.7km/l over 4 days and a distance of 265km with the car. Bearing in mind the size of the car and the fact that most of the journeys were done in the city with a heavy right foot, I’d say these numbers are good. If you spend most of your time on the highways, it’s entirely reasonable to achieve higher numbers. 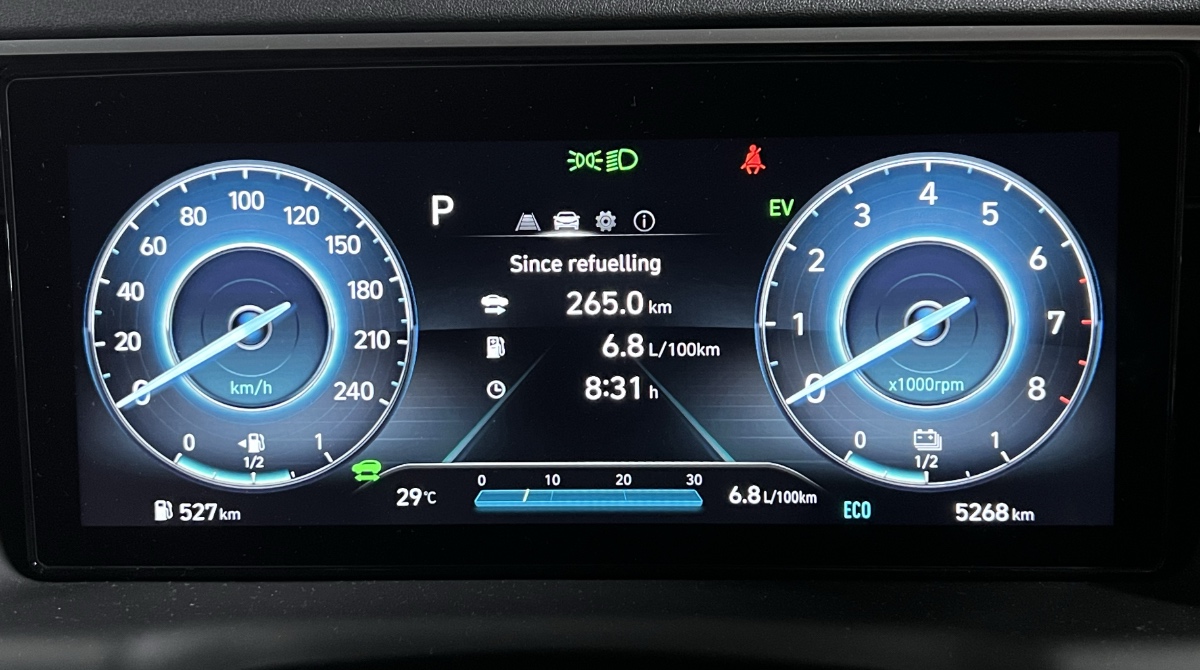 I have no complaints about the way the Tucson Hybrid rides. The balance of firmness and cushiness is well-judged. And like most other Hyundais, its steering is light, which gives drivers a sense of heightened responsiveness and accuracy. Body control for an SUV is decent too. Body roll is unavoidable for a car of this size and height, but the way the car pitches on hard acceleration and braking left me feeling a little queasy at first. 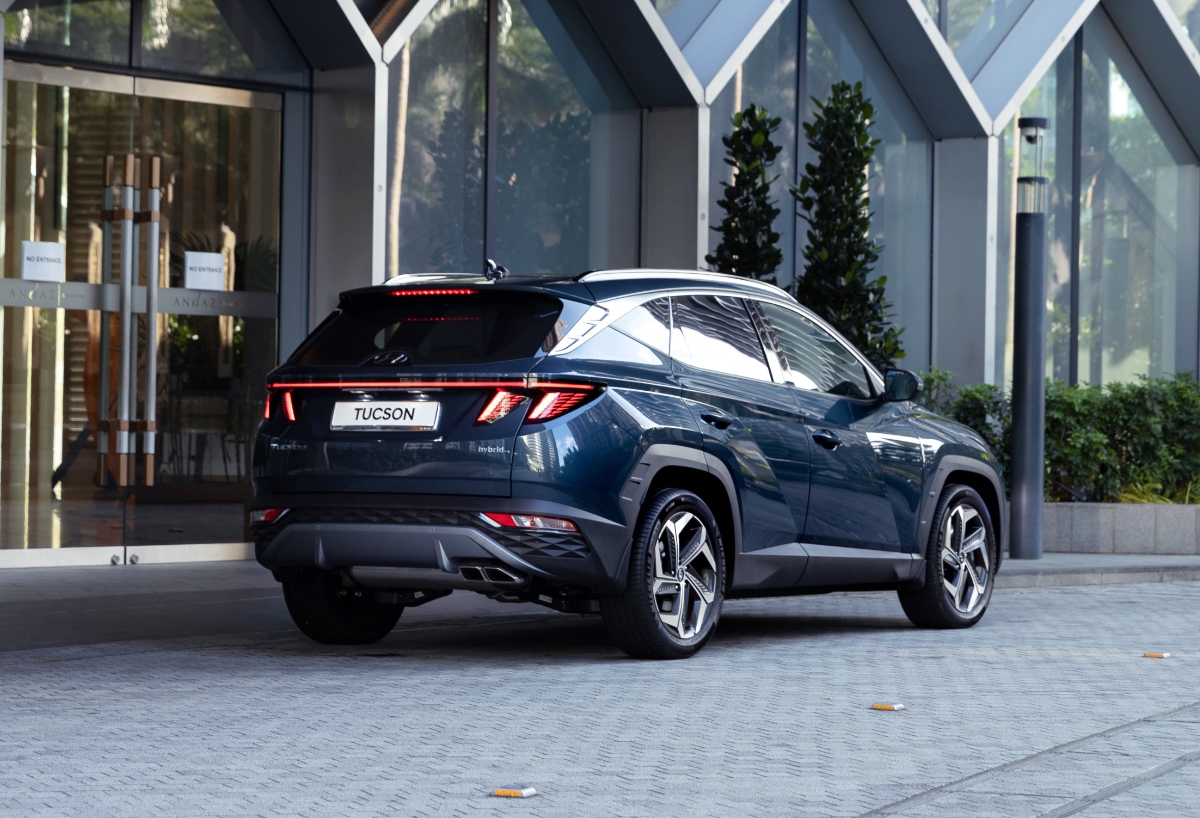 Viewed as a whole, the Tucson Hybrid doesn’t have many flaws. If the way it looks doesn’t bother you, then what you have is a handsome mid-size SUV that combines peppy performance with a great interior, good ride comfort, and outstanding practicality. And at S$180,999, it’s priced quite competitively to its rivals too. All things considered, this is a very accomplished SUV and an impressive effort from Hyundai.