How to Take Great Shots at Night with Your Compact Camera

Once in a while, a friend will ask me which digital compact camera she should get. One request I often hear is for a compact camera that takes "good shots at night."

It's hard to answer that question, because taking good photographs at night isn't just a matter of which camera you shoot with, but also how you shoot using the camera. You can have the best performing camera in the world, but if you don't know the techniques to shoot what you want, you'll end up disappointed with your photos.

When I dig deeper, I usually find that different friends have different expectations about what taking "good shots at night" means, and each person needs a different answer to their problem. That's why I've written this post, to help my non-geeky friends have an easy way to understand and shoot great shots at night with a digital compact camera.

1. "I want to take beautiful shots of the city at night." 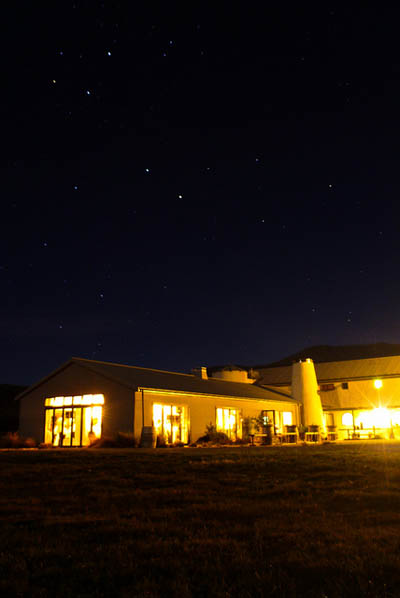 A common problem is that shots taken of a city or some other landscape don't look as beautiful as they appear in real life. A simple way to explain this is that the camera can't see as much light as your eyes can, and that's why even though you can see a lot of detail in a night scene, your camera doesn't capture it.

That's why your camera will force the flash to fire at night, because there's not enough light for it to capture anything at a fast enough shutter speed where camera shake isn't a problem. But flash doesn't help when shooting night scenes, as one small camera flash can't possibly light up an entire landscape.

One solution is to use a tripod to steady the camera, so that you're not actually holding the camera. Even better, set your camera on a tripod, then use the timer to start the shot, so you don't risk moving the camera by pressing the shutter button yourself. If you don't have a tripod, try using a stable surface, like a table or shelf. And remember to switch off your flash.

If your final photo still looks too dark, then try going into your compact camera's Scene mode and choosing the 'Night Landscape' mode (or something with a similar name). This will tell the camera's shutter to stay open even longer, some compact cameras will stay open even up to a minute! So don't worry if your camera looks like it's sitting there not doing anything. If your compact camera is a more advanced model, then you can manually set a slower shutter speed yourself using the Shutter Speed Priority mode.

The problem with tripods is that they're usually big and heavy, and if you're travelling it can be a hassle to carry them. A company called Joby makes smaller, flexible tripods called GorillaPods, which are a convenient alternative. 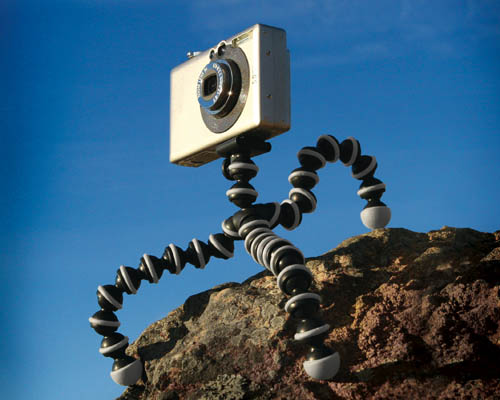 2. "I want to have the backgrounds show up when I use flash at night." 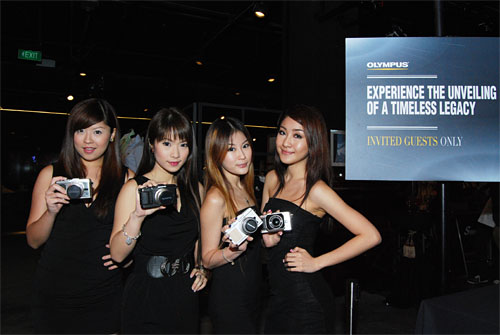 Have you ever photographed your friends at night using the camera's flash, only to see that the background turns out completely black even though your friends are well-lit?

If you want to see the background as well as your subjects, the trick to this is adjusting the way your digital compact camera's flash works. The problem is that not all digital cameras will give you this amount of control over the flash, so you'll have to check your model to see if you can.

Go to your camera's menu and see if there's a 'Flash' setting. Then look for a setting called either 'Slow Sync Flash' or '2nd Curtain Sync Flash'. Your camera might even have secondary settings for either 'Rear Curtain Sync' or 'Front Curtain Sync' (we'll get into this later). If your camera has none of these settings, you can try and see if there's a 'Night Portrait', 'Night Scenery' or 'Party' setting to be found in Scene Mode. These can sometimes achieve the same result.

When you set your camera to these settings, what will happen is that the camera will then shoot with a slightly longer shutter speed to include the background in the scene, as well as firing the flash.

One risk is that because of the longer shutter speed, you might end up with a slightly blurry background while your subject is sharp (you might also end up with a trailing effect on your subject if they move), making the photograph look a little psychedelic. But try for yourself and see if you like the results. 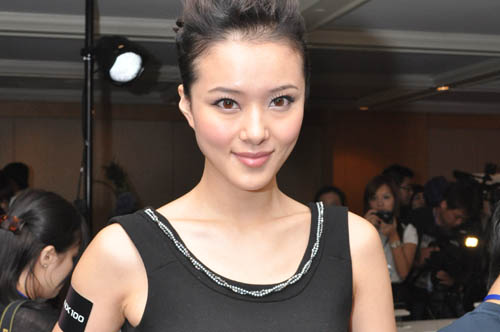 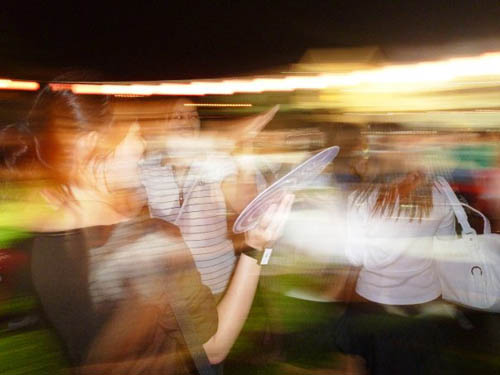 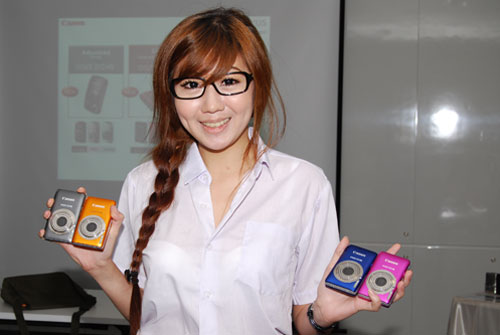 This is a common request, as photos shot with flash can look unnatural and unflattering. You can solve this problem to a certain degree using something called the ISO setting.

Not every compact camera will let you manually define ISO sensitivity, so you'll have to check yours. If your camera has a P (Program) mode you should be able to shift ISO settings there. The higher the ISO setting, the more sensitive the camera sensor will become to light, and thus the more light it will capture. For example, ISO800 will capture more light at ISO100.

A higher ISO setting has several advantages. Because it can capture more light, you can shoot a dim scene and see details in the photo without using flash. You can also shoot handheld in dim areas without a tripod, as higher sensitivity to light means the shutter doesn't need to stay open as long. 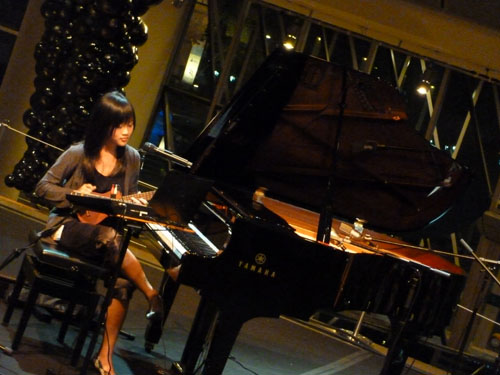 The most obvious disadvantage of using higher ISO settings is image noise. The higher the ISO setting, the more image noise you'll see in the image, which are like tiny dots which sprinkle the photograph and cause it to lose clarity. Better performing image sensors, which produce less noise at higher ISO settings, is one reason why some compact cameras cost more than others, although price is not a guarantee of quality.

While pushing the ISO setting can help in some dim scenes, it can only do so much. If there really isn't enough available light, then you'll just have to use flash.

Hopefully by now you'll have realized that there's no one answer to this simple statement. Instead, there are many ways to solve the problems of shooting at night, depending on what you want to shoot.

If, after trying all these techniques, you're still not satisfied with the quality of your night shots, and you really want to learn how to improve them, then perhaps your problem isn't one of technique but one of composition. If you really want to improve, consider investing in learning about the craft of photography.

Cameras don't take photographs, people take photographs. Your camera can only do so much – at the end of the day, you're the one behind it, telling it what to shoot and when to shoot it. It's just like a paintbrush, albeit a very advanced paintbrush.

If you can develop an eye for better photographs by learning some basic principles like the rule of thirds, how to use perspective and the importance of timing, your images will look better. You don't have to spend a fortune on books, magazines or DVDs (although those will definitely help), you can start off reading any of the many free online photography sites for tips, like Digital Photography School. There are even free e-books, like this one called Craft & Vision: 11 Ways You Can Improve Your Photography.

If you already understand the basics of the craft and still aren't satisfied with the quality of your images, then perhaps you can consider upgrading from a digital compact camera to either a mirrorless system camera or a DSLR camera. 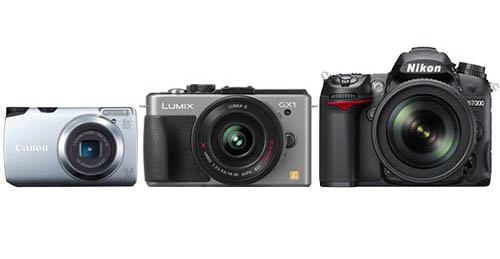 These larger cameras bring several advantages which are out of reach of digital compacts. Their larger sensors produce better looking images, they can shoot at higher ISO settings with less noise, they let you manipulate not just flash but also other manual settings, and they have optional flash accessories which let you do things like bounce the flash to produce more natural-looking results. You can also swap lenses to create more powerful-looking images.

The disadvantage of these larger cameras is that, well, they're larger, heavier, and more expensive. And there's a learning curve involved if you want to make the best use of them. When it comes to convenience, mirrorless system cameras like Micro Four Thirds or NEX are usually smaller and more user-friendly, while DSLR cameras are bigger and can be more complex.

But here's the secret: even photographers using these advanced cameras still use the same techniques like shooting on tripods, setting Rear Curtain Sync flash or increasing ISO sensitivity to shoot great night shots. So if you have these options already on your digital compact, why not give it a go first, and see if you can come back with some great results.