These custom keycap sets will literally make you stop and stare 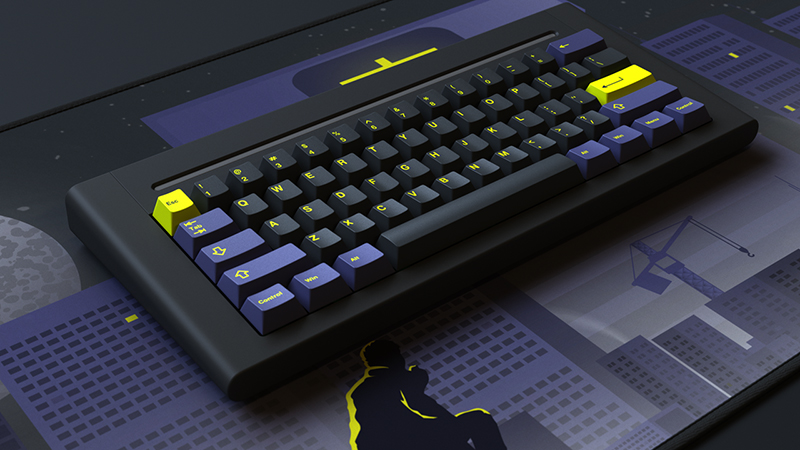 This is me gushing about keyboards again. But this time, I want to talk about the mind-boggling selection of custom keycap sets available today. A keyboard is so much more than just a drab tool that you bang at every day, passive-aggressively telling Susan that you’re “reattaching the report for her convenience." It’s a statement piece that speaks as much about you as the outfit you wear. It deserves to be paired with a matching mousepad, a custom hand-made cable, and yes, that one very special keycap set that you picked out.

Are you using one of those plastic, grime-encrusted, membrane monstrosities that came with your company PC? That thing belongs in the bin. Okay, I’m kidding, but now I really want to direct your attention to the geekhack forums and the selection of keycap group buys available there.

Maybe you’re a fan of Avatar: The Last Airbender. Perhaps you like the sea and the roiling of the deep blue waters. Or maybe, you just really like jamón ham. Believe it or not, there’s a set inspired by each of these things. 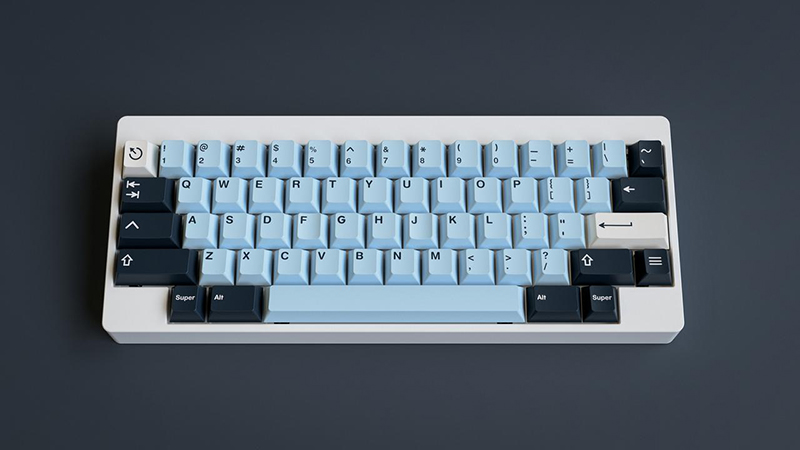 GMK Mizu’s colors are drawn from those of the Water Tribes, and Mizu means water in Japanese. The set’s novelties – a handful of keycaps with stylized legends – pay homage to both The Last Airbender and The Legend of Korra, featuring Naga the polar bear dog, Moon and Ocean spirits Tui and La, and Aang’s blue arrow tattoo and eyes. One of the blue arrow keys even has glow-in-the-dark legends, no doubt a reference to Aang when he enters his Avatar State. 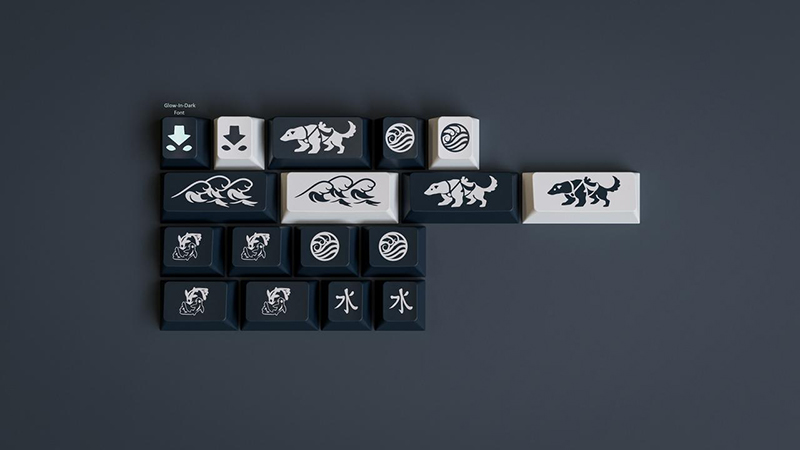 Then there’s GMK Hammerhead, which wants to “evoke the feel of chilled, oceanic spray against your cheeks”. The blueish-green legends on the Deep Water kit are the color of the water when you peer up at the surface from the depths of the ocean. To further set the mood, there’s a whimsical Enter key novelty with a hammerhead on it, in addition to various other nautical-themed keycaps, including a lighthouse, pipe, and ship’s wheel. Unfortunately, the group buy for this set has been put on hold while the creator works out some kinks, but I really hope it comes back. 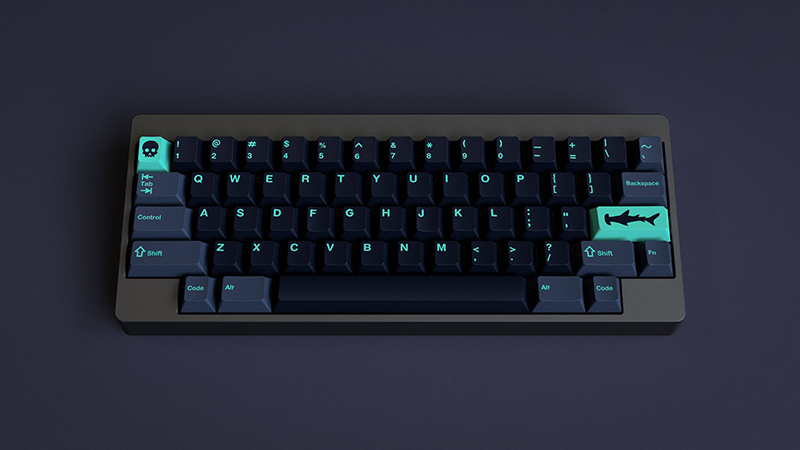 GMK Jamón is less elaborate, but the entire set is colored a deep, lush red that looks absolutely delectable. The novelties are also pretty hilarious, including bacon, ham, and of course, a pig. There was even a collaboration with Rama Works for a white aluminum keycap with a glistening yellow enamel infill that looks just like a fresh sunny-side-up egg. 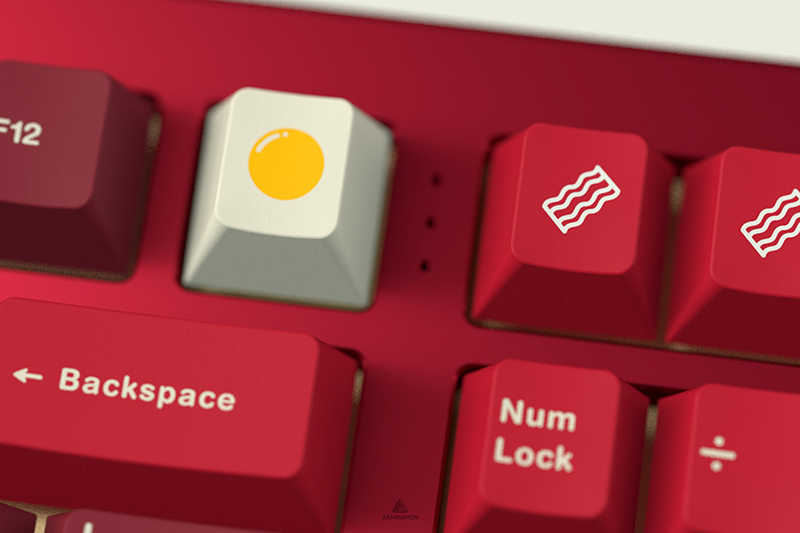 If you’re a coder, you might even appreciate GMK Dracula, a homage to the Dracula Theme color scheme for a range of code editors and applications. There’s even a quirky “ERR!” add-on kit that further references the set’s coding roots, on top of a brightly colored Highlight kit with pastel and neon keys in Dracula colors. I don’t code, but it’s still a pretty good-looking and unique set to my eyes. 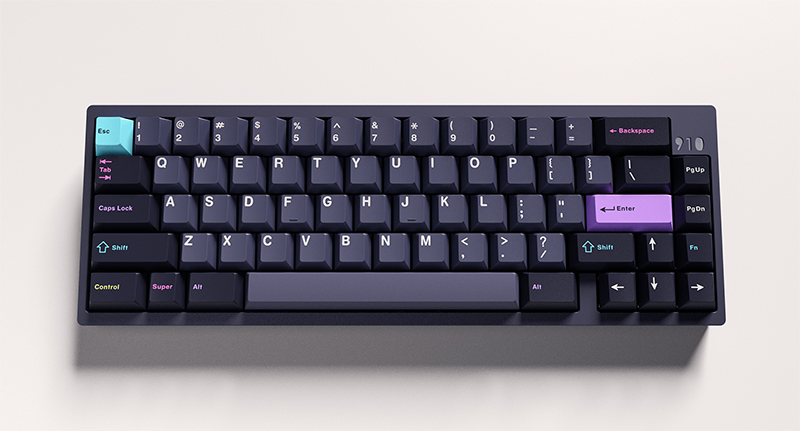 Unsurprisingly, someone has drawn inspiration from science fiction and cyberpunk dystopias as well. GMK Night Runner is all about the dark, inky sky hovering above a neon-drenched metropolis, recalling scenes from Blade Runner and Altered Carbon. I’ll admit that this set took a while to grow on me, and for the longest time I couldn’t decide if it was really cool or downright awful. But together with that mouse pad, I think it could look super awesome.

If Night Runner isn’t your thing though, GMK Pulse is running right now on Drop till the end of the month. It’s another somewhat futuristic-looking set, with deep black alphas and bright turquoise modifiers that really pop. I have the SA version of the set, and I think the GMK version with its Cherry profile looks even better. SA and Cherry are different keycap profiles manufactured by different companies, with Cherry being the lower profile one that’s generally easier to get used to. 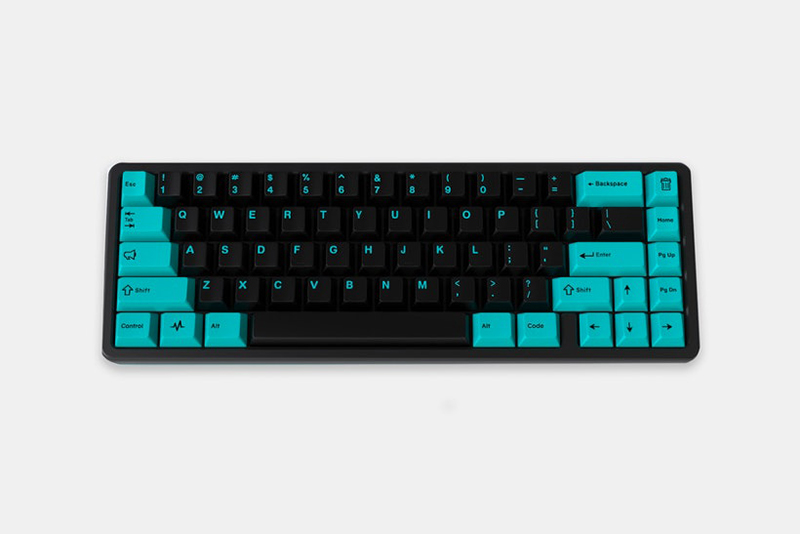 You’re probably also wondering why all the keycap sets have GMK in front of their names. That’s because they’re made by GMK, a German company known for its doubleshot ABS keycaps and use of original Cherry tooling. They’re considered one of the higher quality manufacturers out there, but they’re far from the only ones. It just so happens that many of the best designers now take their sets to them for manufacture, but there are still many other keycap sets available in different profiles and from different factories, if you care to look.

Unfortunately, some of these sets mentioned here have already run, so they’re not available to buy right now. If you want something to get excited about though, you can probably check out MT3 Serika, GMK Peaches n Cream or SA Bliss, GMK WoB Hiragana, and even GMK 8008. Or maybe even GMK Kaiju? My point is that there’s almost nearly something for everyone. If you’re looking to pimp out your battle station, one of these custom sets will do a far better job than any RGB gaming keyboard.

Read next (1): It's a glorious time to get into custom mechanical keyboards

Read next (2): This is why I have more keyboards than I can use at any one time