Fragged by the Mobile OS

Integration versus fragmentation. Steve Jobs' recent comments at Apple's quarterly earning conference call did highlight an ongoing issue for all mobile OS – the fear of having multiple versions for an OS. As a consumer, should you be concerned about platform fragmentation?

Without a doubt, Apple has its iOS platform locked down, refining it to a streamlined user experience that leaves no room for customization. There is no steep learning curve involved, and with just the iPhone to consider, Apple is able to keep its mobile ecosystem under its direct control. Updates are forthcoming and speedy, though there have been issues. This is mainly directed at its older iPhones which won't enjoy the more intensive features of the iOS 4 (read: multi-tasking) updates.

Just a few months ago, we were excited over where Android 2.2, otherwise known as Froyo, was heading with its updates. Adobe Flash 10.1 support, creating Wi-Fi hotspots and application installation on expandable storage definitely whetted our appetite for the new Android update.

But take a look at where Android devices stand today. Earlier on, we did talk about how there's been a disconnection between the hardware and software aspects for Android and its devices. And if that isn't obvious, remember this – only a handful of devices such as HTC's Desire series and Samsung's Galaxy S got their recent announcements and updates to Android 2.2. Motorola is still working on its 2.2 update. As for Sony Ericsson, staying on Android 1.6 and a delayed update to Android 2.1 could prove to be its Achilles Heel.

And this is even more prominent with the re-emergence of Microsoft and its Windows Phone 7 platform. Similar to Google Android, Microsoft has to work with various vendors to bring their mobile OS up to date. During its Windows Mobile 6, 6.1 and 6.5 days, it faced the question of which devices would receive the imminent update to the new OS. With Windows Phone 7, this will be a thing of the past, with updates being delivered across multiple vendors via Microsoft's Zune software.

To avoid the same fragmentation issues faced by Google Android and its hardware partners, Microsoft's stringent hardware requirement to complement its Windows Phone 7 platform has proven to be a wise move. Taking a cue from Apple, its standardized Metro user interface has made the Windows Phone 7 experience much smoother and user-friendly. In contrast, the freedom to customize on the Android OS has brought about a number of user interfaces adopted by each vendor. 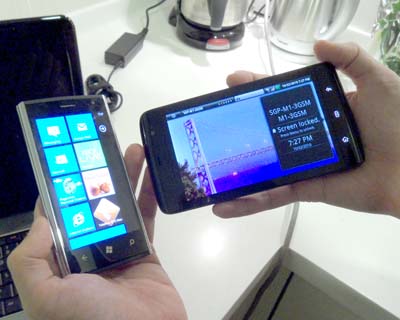 Ultimately, it's a matter of choice. Do you choose to have a user interface that's like everyone else's and is easy to learn with minimal frustration? Or would you like to take a chance, customize your mobile phone and discover many more new things from beyond the OS and the manufacturer? In essence, choose your mobile OS wisely, followed by the device. Don't get fragged, by the mobile OS.