The Dangers of Kickstarter Watches

As a tool for empowerment, the Internet is peerless. It gave us Email and Instant Messaging, allowing users to quickly and efficiently communicate with one another regardless of time and place; and it also gave us social networking tools like Twitter and Facebook, allowing users to find friends and make connections with people from around the globe. In recent times, a service that is empowering a new generation of users is Kickstarter.

Kickstarter is a crowd-funding platform that lets “project creators” reach out to “backers” to raise funds for their projects. The project in question can be anything under the sun - movies, games, furniture, gadgets, you name it.

Recently, Kickstarter gained worldwide attention when the Pebble smartwatch became its most popular project ever. The people behind the Pebble had set a fundraising target of US$100,000 but that was surpassed within just two hours of the project going live. In the end, after almost a month, the Pebble smartwatch garnered an amazing US$10 million in funding.

The Pebble made people realize that crowd-funding was a viable way of raising money for their projects. Unfortunately, the success of the Pebble also led to an increase in the number of fraudulent projects on Kickstarter. 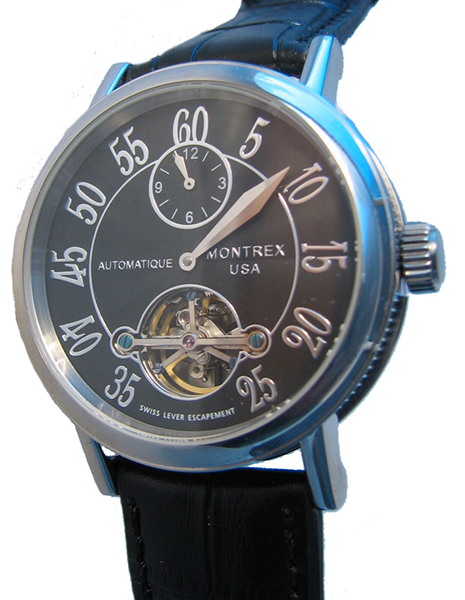 One that got my attention was the Montrex Watch Project. In this project, the creator is offering two timepieces and claims to use an “open source Suisse movement” that has been modified with a “resonance carousel”.

First of all, there is no such thing as an "open source Suisse movement". Major Swiss movement blank makers such as ETA, Sellita and Soprod do not give out their movements, much less blueprints or templates of their movements, for free. This is not the same as open source software such as Firefox and Android, which are readily available for download and are completely free. Movements need to bought from their respective manufacturers and owners.

In any case, the movement in the Montrex watch is unlikely to be Swiss. Montrex specifies its movement as having either 29 or 24 jewels, but both the ETA 2824 and 2892 (arguably the two most widely-used Swiss movement blanks) have 25 and 21 jewels respectively. My guess is that it could either be a Japanese-sourced Miyota 9015 (this fits the 28,800 bph and 24 jewel description) or a Chinese movement, specifically one sourced from the Shanghai Watch Company. The similarities between the Montrex watch and this particular piece from the Shanghai Watch Company is simply uncanny. There is nothing wrong with having a Japanese or Chinese movement - the Miyota 9015 is very popular amongst boutique watchmakers. More importantly, the problem here lies in the misrepresentation of what is being offered. 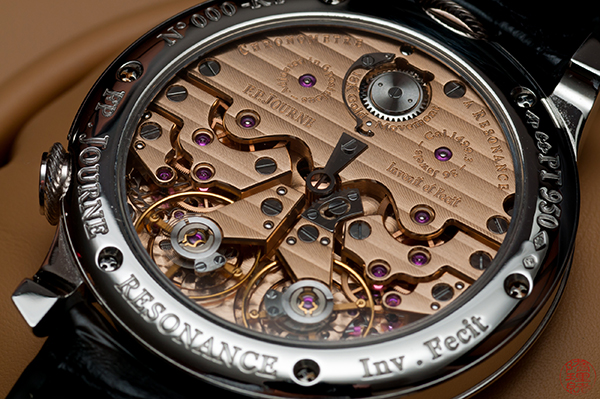 Furthermore, the project creator does not elaborate how its “resonance carousel” works. It seems like the projector creator is trying to mislead backers into believing that some sort of a high-level complication has been incorporated into the movement.

The “carrousel” is in fact a complication that is similar to the tourbillon in theory, in which the regulation system is rotated to cancel out the effects of gravity. The Blancpain Tourbillon Carrousel elegantly combines both complications in this watch. Whereas the concept of “resonance” in horology usually involves two escapements beating in tandem to strengthen their beats and thereby reduce the effects of outside force - as exemplified in F.P. Journe’s Chronomètre à Résonance. These are two extremely complex complications that require a lot of skill and training to design and develop. And from what I can see, the Montrex watch does none of the above. There is so much about this watch that does not jive.

Despite the fishy business with regards to the movement, the project has since been successfully funded with backers pledging a total of US$61,504 against its target of US$7,000. This was back in March 9. However, a quick glance at the comments section shows an interesting exchange of messages showing that many backers have yet to receive their watch, even though its well past the estimated delivery date of June, and have no means of getting their monies back.

More incredible is the fact that the project creator later turned on his backers, blaming them for "bullying" him and said he was bailing on the project. Although he retracted the statement a couple of weeks later, it remains to be seen if any of his backers actually received their watch. 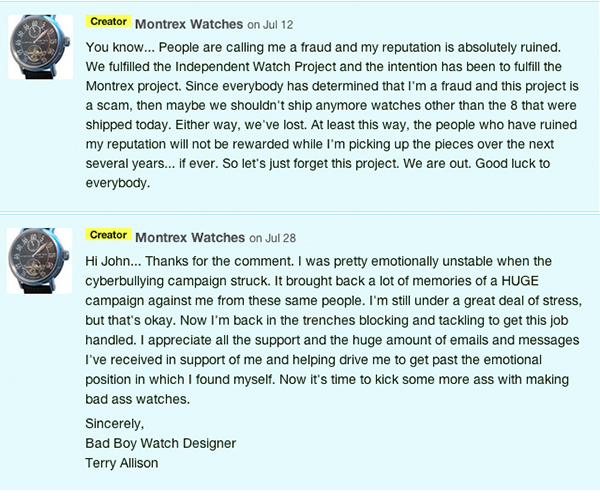 And that is one of the biggest problem with Kickstarter. It works mostly on a system of faith. If you look closely through Kickstarter’s Terms of Use, it states that “The Estimated Delivery Date listed on each reward is not a promise to fulfill by that date, but is merely an estimate of when the Project Creator hopes to fulfill by”. This is followed by, “Project Creators agree to make a good faith attempt to fulfill each reward by its Estimated Delivery Date.”

Of course, Kickstarter does state that a) “Kickstarter does not offer refunds. A Project Creator is not required to grant a Backer’s request for a refund unless the Project Creator is unable or unwilling to fulfill the reward.” and b) “Project Creators are required to fulfill all rewards of their successful fundraising campaigns or refund any Backer whose reward they do not or cannot fulfill.” However, the fact that the “Estimated Delivery Date” does not need be adhered to, makes the following two points about refunds and returns hard to enforce. 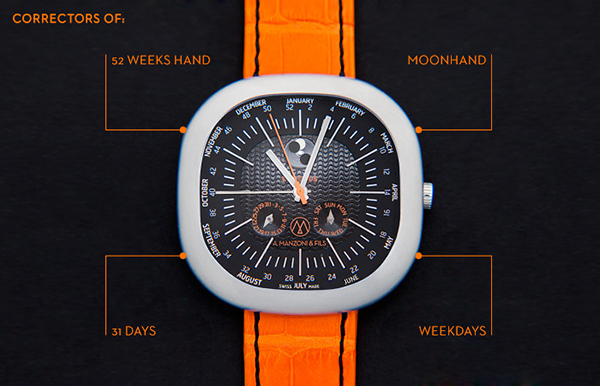 Fortunately, not all watch-related projects are as toxic and deceptive as the Montrex Watch project. A particular Project that is both promising and meaningful is the The Bradley - a watch designed for the blind. For those with deeper pockets and a greater appreciation for horology, there is the Canopus, which was started by the Oliver Ike, the founder of Ikepod.

To summarize, Kickstarter and similar crowd-funding platforms can be a force for change and an agent for good. It lets designers and inventors connect with people and embark on projects that would otherwise might not have come to fruition. But unfortunately, as is the case with so many things that is associated with the Internet, it is susceptible to frauds and con jobs. Our advice is to be sure to do some legwork before backing projects. The phrase caveat emptor has never been more appropriate.